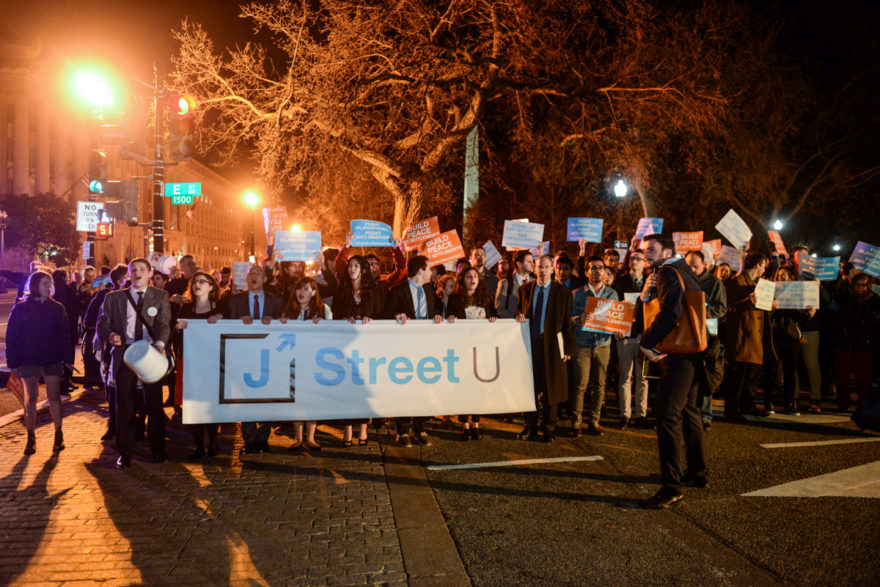 J Street U students march on the White House on Feb. 25, 2017, on the eve of J Street’s annual conference. (J Street)

WASHINGTON (JTA) — J Street, the liberal Middle East policy group, and the Jewish Council for Public Affairs, the public policy umbrella for Jewish community councils around the country, launched annual conferences in Washington that each focused on challenges to Jewish activism during the Trump administration.

J Street’s adversarial relationship to the new administration was explicit in its programming, while the JCPA was not as blunt. But agendas for both conferences, running Sunday through Tuesday, indicated a rough transition from the Obama administration, which was largely friendly to the aims of both groups.

Both conferences include sessions dedicated to advancing the two-state solution to the Israeli-Palestinian conflict. President Donald Trump has said he is agnostic about the outcome, reversing 15 years of U.S. policy favoring two states as a final status arrangement.

The JCPA program is focusing on civil rights, particularly criminal justice reform. Panelists at sessions on Sunday morning spoke of their fears that the Trump administration would reverse Obama reforms, including greater oversight of community policing.

Panels at both conferences spotlighted Islamophobia, or hostility to Muslims, while J Street also had panels on refugees and JCPA on immigration rights. Trump has come under fire for his attacks on Muslims during his campaign, and for banning entry to refugees and to travelers from seven Muslim-majority countries since becoming president.

JCPA ran two sessions in sequence on Sunday on advocacy under Trump. The first featured sharp Trump critics from inside and outside the Jewish community. It was followed by supporters of his agenda representing the Emergency Committee for Israel and the Republican Jewish Coalition.

In addition to an array of Jewish groups that come under the JCPA umbrella, there were guest speakers at the conference representing groups that also are aligned against aspects of the Trump agenda, including the American Civil Liberties Union, the NAACP, the National Immigration Law Center and Americans United for Separation of Church and State.

J Street made no bones about its oppositional agenda, with one training session titled “Fighting for Our Future: Harnessing our Power in the Age of Trump.” On Saturday night, in a pre-conference event, J Street U, the group’s university affiliate, marched on the White House, saying on its Twitter feed that it was for “peace, democracy & an end to rising Islamophobia and anti-Semitism.”

Last night, @jstreetu rallied outside the White House for peace, democracy & an end to rising Islamophobia and anti-Semitism. #JSt2017 pic.twitter.com/WYEz7Kj9S5

Jeremy Ben Ami, the J Street president, said Trump’s policies necessitated a broader agenda for the group, which until recently had focused more on Middle East issues, advocating for the Obama administration’s peace policies and the Iran nuclear deal. That advocacy often makes the group the target of criticism by larger Jewish organizations that object to its frequent criticism of Israeli government policies.

“There are some really important fights ahead on foreign policy, on Israel, on the Iran deal, on Palestinians, on Israel at the United Nations,” Ben-Ami said Sunday at a briefing for reporters. “But there are also issues we haven’t related to as J Street, which we will, like refugees, immigration and Islamophobia.”