Not just prayers: Synagogues are organizing to fight Trump’s agenda 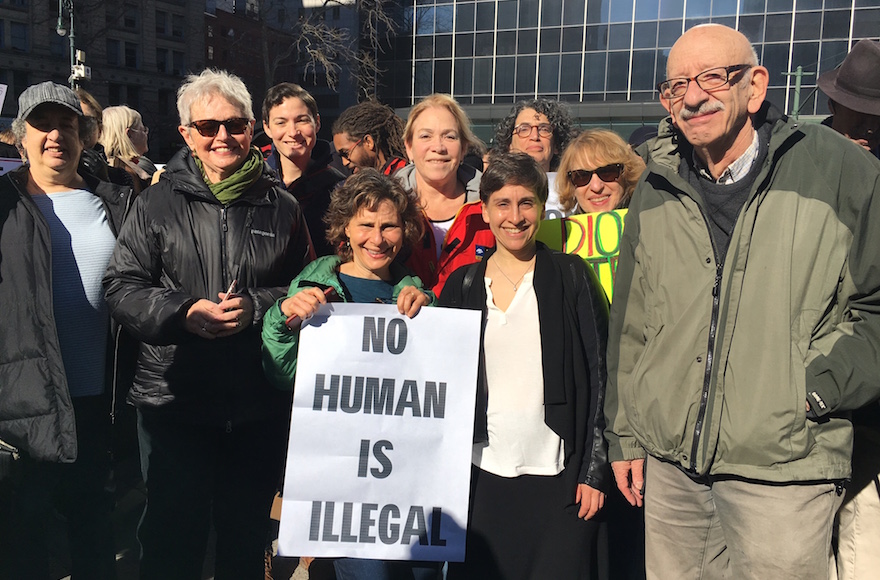 NEW YORK (JTA) – The day after the presidential election, as congregants gathered in her Brooklyn synagogue to air their feelings, Rabbi Rachel Timoner was already starting to organize against the incoming administration.

She called her local city councilman, Democrat Brad Lander, and together they organized an activists’ panel at her congregation, Beth Elohim, to discuss policy changes under President Donald Trump. More than 1,000 people packed the sanctuary for the event.

Four months later, Beth Elohim has been transformed into an activist hub in Brooklyn’s affluent and historically progressive Park Slope neighborhood. Together with Lander, the synagogue has set up 15 working groups on liberal causes ranging from combating anti-Semitism and Islamophobia to protecting reproductive rights. Ten thousand people are active in the groups, and seven mass meetings of the activists, educating them on issues and teaching organizing tactics, have drawn an average crowd of 1,000.

“Our people are awakened, activated, determined, in some cases alarmed, and deeply wanting to be part of preventing harm and healing this country,” Timoner said. “I have literally hundreds of members who are in acute pain, who are seeing their country become distorted.”

Beth Elohim is among several synagogues that have doubled down on political activism since Trump’s election. Synagogues are taking on roles usually reserved for nonprofits – hiring professional activists, organizing protests, mobilizing congregants to lobby and educating them on immigrant and refugee rights. Several synagogues sent delegations to the Women’s March on Washington and its local offshoots in January.

Some of these synagogues don’t see the work as partisan, aimed as they are directly at Trump’s policies. (Trump himself has called for loosening federal laws that prevent houses of worship from endorsing political candidates.) Others, citing overwhelming demand among their congregants, are less concerned about appearing political. But they all say that regardless of the risks, this is the moment for synagogues to offer their members a chance to engage on issues that matter to them in a Jewish context.

“We have Torah, and Torah is very clear that we do not oppress the stranger, that we love our fellow human beings as we love ourselves,” Timoner said. “What I think it offers to have things like this happen in a synagogue is it provides the moral framework.”

Beth Elohim has received a grant to hire a community organizer, a step Manhattan’s Stephen Wise Free Synagogue is also taking, fueled by more than $100,000 in congregant donations. Stephen Wise is organizing its members into three activist groups – on refugees and immigrants; anti-Semitism and Islamophobia; and protecting civil liberties.

Stephen Wise helped raise $20,000 for Jews in Whitefish, Montana, when they were threatened by white supremacists in January. In June, a delegation from the synagogue will travel to Greece and Germany to aid refugees, while educating kids at the synagogue about refugee rights. Ammiel Hirsch, the synagogue’s rabbi, expects groups to lobby legislators on a range of issues as well.

“Judaism is a faith that believes in action, in making the world a better place through policy,” Hirsch said. “There’s got to be a force of legislation behind it. Otherwise, it’s just a question of localized humanitarian action, without regard to collective policies that ensure we’re on a higher moral plane.”

Other synagogues have collaborated in interfaith initiatives or served as spaces for activist gatherings. B’nai Jeshurun in Manhattan was the site of a rally that drew thousands before the New York City women’s march in January. The synagogue has also set up an action alert list with 200 subscribers to mobilize congregants for protests. 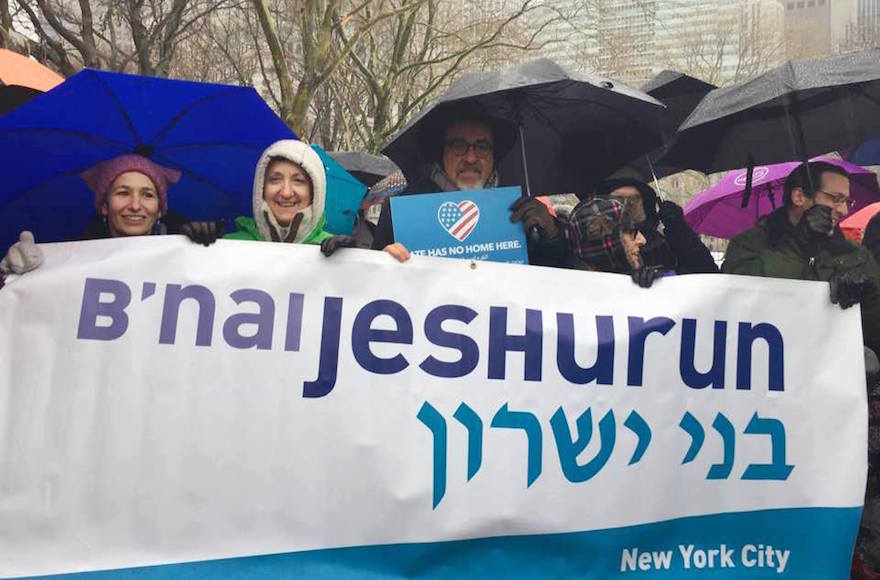 For some of these synagogues, the current activism is just an intensification of a historical tilt toward political engagement. B’nai Jeshurun has a longstanding program to aid New York State farm workers, while Temple Sinai in Washington, D.C., led two trips to aid undocumented immigrants in Texas in 2014 and 2016, before Trump’s election. Synagogues nationwide have long been active on Israel policy, and in the 1970s and 1980s, on behalf of Soviet Jewry.

But some congregants see synagogue-based political action as a step too far. David Horowich, a Reform Jewish businessman from Syracuse who voted for Trump, appreciates Reform Judaism’s cultural and communal aspects. But he feels synagogues shouldn’t be in the business of political advocacy, because it’s not always easy to judge whether policies are successful.

“I haven’t been in favor of coming out with statements that are political, because sometimes they can come back and haunt you,” Horowich said. “I’m open to people expressing their opinions, but you have to wait until it all plays out.”

For those who oppose him, Trump’s policies on refugees and immigration have become a particular focus of synagogue activism. All four religious denominations and several major organizations opposed the first iteration of his immigration ban in January.

In response to Trump’s immigration policies, several synagogues have declared themselves sanctuaries for undocumented immigrants. For some synagogues, including Temple Sinai, that means setting aside rooms should undocumented immigrants need a place to live. Others, like Philadelphia’s Congregation Beth Zion-Beth Israel, which is exploring becoming a sanctuary, are holding classes for immigrants and others on immigrant and refugee rights.

“Our religious tradition teaches about not only welcoming the stranger but not oppressing the stranger, and making sure the most vulnerable in our midst has been protected and cared for,” said Temple Sinai Rabbi Jonathan Roos. “The level of fear is at a level unseen during the Obama years, even when the level of deportations was high.”

The push for synagogue activism appears to be spreading. Timoner has held two conference calls with rabbis interested in Beth Elohim’s model. And T’ruah, the rabbinic human rights group, drew 200 rabbis to a conference in February, called No Time for Neutrality, that ended with 19 rabbis getting arrested during a protest in front of a Trump hotel in New York City.

“We have more power, privilege and social capital than we’ve ever had in this country,” said Beth Zion-Beth Israel Rabbi Yosef Goldman.”It’s an opportunity for us to be vigilant about using our power to defend our own community, but [also] to defend those around us who are more vulnerable than we are.”