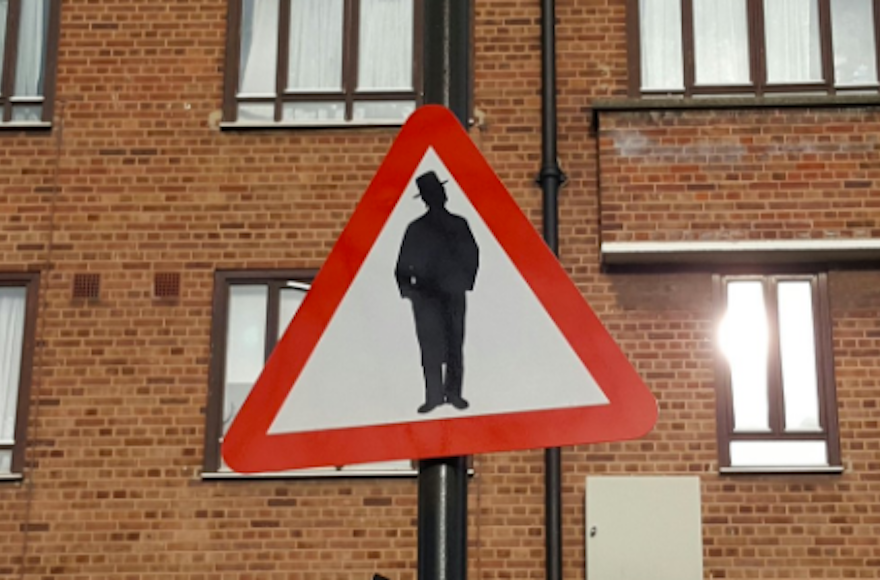 (JTA) — A sign hung on a light post in a largely haredi Orthodox neighborhood of London depicted Jews as hazardous.

Franck Allais, an artist and photographer, apologized Wednesday for the distress caused by the sign in the Stamford Hill neighborhood, saying it was part of a project about identity. There was no word on whether Allais was facing punishment.

The triangular sign with a red border, mimicking an official road sign indicating a hazard, showed the silhouette of a haredi Orthodox Jew with a fedora hat and side curls. It was hung near a synagogue.

The sign was discovered Tuesday by the Stamford Hill Shomrim, a Jewish neighborhood watch group. The Shomrim reported the sign to the Metropolitan Police and the local council.

#Shomrim reported to @MPSHackney and @HackneyCouncil this offensive 'Beware of Jews' sign which was fixed onto a lamppost in #StamfordHill pic.twitter.com/mj8AfQTSSu

“The sign has caused a lot of concern amongst local Jewish residents, especially as it is in such close proximity to a synagogue,” Barry Bard, supervisor of the Stamford Hill Shomrim, told local media.

Allais reportedly had placed other signs in the neighborhood, including a woman pulling a shopping cart, a man pushing his wheelchair, and a cat.

Prior to Allais’ apology, Stephen Silverman, the director of investigations and enforcement of the Campaign Against Antisemitism, said “This latest hateful incident shows the lengths to which anti-Semites are prepared to go to tell Jews that they are unwelcome in their own city. For many in the haredi Jewish community, this type of abuse and harassment is becoming a part of life. It has no place in a city that prides itself on its inclusivity.”