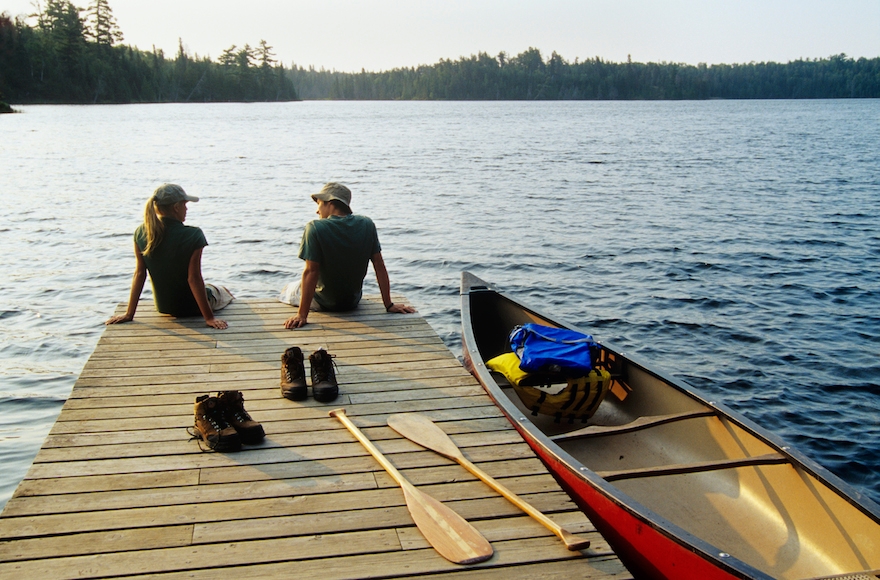 NEW YORK (JTA) — The campers wake up in their cabins on Friday morning, dress and go to breakfast. Next comes a range of activities — arts and crafts, archery, kickball.

Then, after an hour of primping and preening for Shabbat, they gather as the sun sets and head to Shabbat dinner, where they will bless the wine, eat and maybe sing. Then the wine — and beer — is poured.

This summer, hundreds of Jews will return to the grassy fields, rickety bunks, beaten basketball courts, and freezing lakes where they and their peers spent summers in middle school. For a long weekend they will sleep on the same bunk beds, throw the same dodgeballs, make the same lanyards and eat the same food (or, fine, maybe better food).

The seven adult Jewish camps — scheduled for May to October at camps from Massachusetts to California — are the inaugural project of Trybal Gatherings, an organization co-founded by Jewish camp alum Carine Warsawski. Trybal wants to replicate the success of short-term programs in Israel, like Birthright, by having Jews reconnect to Judaism and relax in a nostalgia-inducing and familiar environment.

“We’re trying to keep the core elements that make these immersive experiences so powerful and bring them to people in their 20s and 30s,” said Warsawski, 32, who as a teen attended the Reform Jewish Eisner Camp in Massachusetts. “The core elements are a sense of community, a sense of Jewish connection and a sense of adventure.”

The camps will run for four days, starting on a Thursday or Friday, at a time when the kids’ camps are not in session. Anyone 21 and over, Jewish or not, can attend, so that Jews with non-Jewish partners won’t be excluded. Bunks in a regular cabin run a bit above $500, while a spot in a private room at the camp’s retreat center will cost more than $600. Warsawski is planning on a minimum of 100 campers at each location.

In bringing adults to Jewish camp, Warsawski is extending a traditional hallmark of the American Jewish experience.

According to the Foundation for Jewish Camp, some 200,000 kids attend more than 300 Jewish summer camps each year. It’s an experience that has been immortalized in American culture, from Allan Sherman’s 1963 song “Hello Mudduh, Hello Fadduh” to the 2001 cult film “Wet Hot American Summer.”

Though far shorter than the average child’s camp stay, Trybal’s sessions aim to duplicate the experience as much as possible. On a sample itinerary, guests will arrive Thursday afternoon, set up their bunks and go to an initiation ceremony featuring something like a flaming bow-and-arrow performance. The next day, they will embark on the classic camp activities, like arts, sports or swimming. Friday night brings Shabbat dinner, with beer and maybe a wine tasting, and a light take on a Shabbat prayer service.

“We’re trying to set the bar low,” Warsawski said, regarding the camp’s Jewish ritual content. “We want this to be inclusive. Diving into a heavily prayered Shabbat experience can marginalize people who didn’t grow up with those prayers.”

After another round of Jewish-themed activities on Saturday morning (like making beeswax Shabbat candles), the campers will split up for a traditional color war. But during the final relay, instead of just jumping over hurdles or swimming, campers will have to successfully complete “adulting” activities, like ironing a shirt. Then, after a closing ceremony on Sunday, the campers will return to their everyday lives.

As much as the experience recalls childhood summers, it has a decidedly adult twist. Misdeeds that would have gotten 13-year-old campers expelled — from drinking to sex to ditching activities — are fine now that they’re 30. Rather than a sunrise bugle, wake-up might be as late as 10, with a boozy brunch to follow. And there’s a party every night, with a DJ and an open bar. But camps will obey state laws, which means legal or controlled substances are still a no-no.

“I expect people to have a good time,” Warsawski said. “I think people are responsible. I think people are coming here to have fun, and the open bar is a big draw, but there’s a lot more than getting wasted that makes it special.”

Trybal is one of several organizations in recent years to launch adult camps. Camp Bonfire, another adult camp with no religious affiliation, will run two long weekends this year, drawing 180 people per camp. Another is Camp No Counselors, which delivers what its name advertises.

After the summer ends, Warsawski plans to expand Trybal’s offerings to include other short-term immersive experiences with a Jewish bent. She’s considering a Hanukkah trip to Iceland, or a few days on a dude ranch. In every case, her goal is the same: to give adults the same sense of community and possibility that camp gave her.

“You get to be who you are” at camp, Warsawski said.

“When you finally get to explore and try new things, and see what you like, and make your own choices, that’s how you start to form who you are. That spirit of exploration doesn’t die when you’re a kid,” she said. “You have that spirit of curiosity even when you’re an adult.”

In this family, all four siblings found spouses at the same summer camp