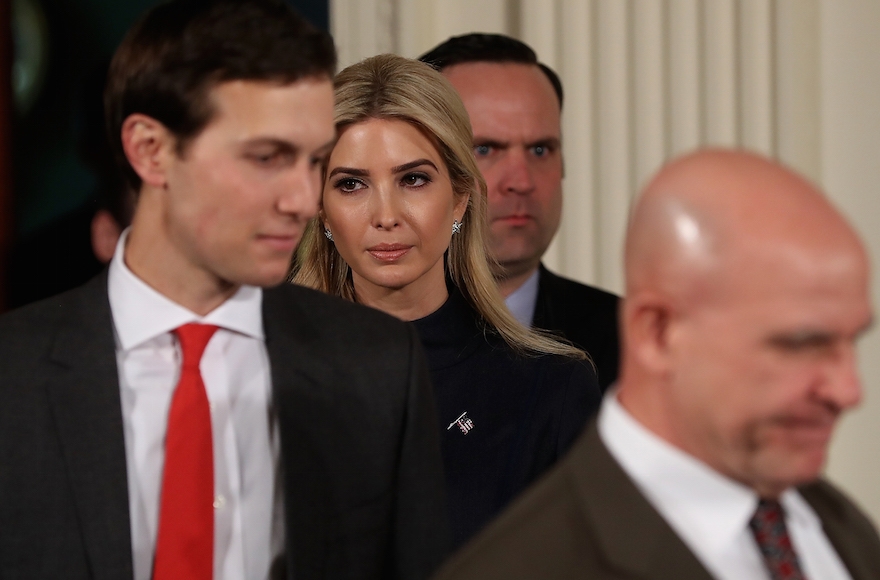 (JTA) —  Ivanka Trump, the Jewish daughter of President Donald Trump, reportedly is working out of a West Wing office and is in the process of receiving a government security clearance.

Ivanka Trump’s office is on the second floor, next to senior adviser Dina Powell, who was promoted recently to a position on the National Security Council, Politico first reported Monday evening. Ivanka Trump also is set to receive government-issued communications devices this week.

Trump and her husband, Jared Kushner, a senior adviser to the president, moved their family to Washington, D.C., when the president took office.

Though Trump does not have an official title and will not draw a salary, she will follow the ethics rules that apply to government employees, Jamie Gorelick, an attorney and ethics adviser for the first daughter, told The Associated Press.

While Trump continues to own her own lifestyle company, which sells clothing, shoes and jewelry, she has turned daily management to the company president and has set up a trust to provide further oversight. She also has barred the business from using her image in advertising to promote the products.

“I will continue to offer my father my candid advice and counsel, as I have for my entire life,” Trump said in a statement while acknowledging that “there is no modern precedent for an adult child of the president.”

Trump had said during the transition that she would not play a formal role in the administration when she moved to Washington. She also said, however, that she would continue to fight for women’s issues, including maternity leave and child care.

On Friday, she participated in a meeting of the president and German Chancellor Angela Merkel with the CEOs of U.S. and German companies to discuss workplace development, sitting beside Merkel during the discussion.

Honored to join @realDonaldTrump, Chancellor Merkel and CEOs of US and German companies in a robust discussion on #WorkforceDevelopment pic.twitter.com/dJnrLpqcYF