This 90-year-old German rabbi is now a movie star 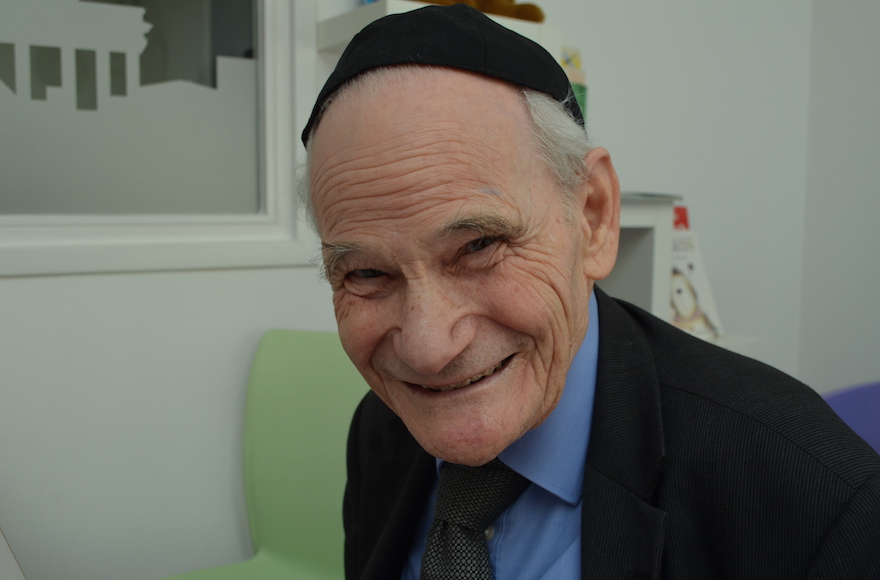 Willy Wolff is the star of one of the highest-grossing documentaries in Germany this year. (Toby Axelrod)
Advertisement

BERLIN (JTA) — For many Germans, Rabbi William “Willy” Wolff is the first Jewish religious leader they have ever met.

And he’s the perfect man for the job. Diminutive, with a disarming chuckle and twinkling eyes, Wolff, who turned 90 in February, effortlessly breaks down that uniquely German condition of “Berührungsangst” – literally “fear of contact” with others.

Wolff, who fled Nazi Germany as a young boy and returned in 2002 to work in the former East Germany, is the first rabbi many Germans today have encountered in part because of his interfaith outreach over the years as one-time head rabbi for the former East German state of Mecklenburg-Vorpommern, serving three liberal Jewish communities.

“He is really a gifted ambassador for Judaism,” said Hans-Jürgen Abromeit, a Protestant bishop who has worked often with Wolff on interfaith programs and calls him “a fatherly friend.”

More recently, however, Wolff has reached a new level of prominence thanks to German director Britta Wauer. Her documentary, “Rabbi Wolff — A Gentleman Before God,” has been playing in theaters across the country. One of the top-grossing German documentaries in 2016, it will have its North American premiere in May.

Since the film’s release, the apparently tireless rabbi has been zigzagging around Germany with Wauer talking with dozens of audiences and signing copies of her accompanying book, “Rabbi Wolff and the Things of Life.”

“He’s not transmitting a narrow religion but humanity,” said a starstruck woman after a screening and discussion in the former East Berlin. “I like the calmness with which he approaches life.”

Wolff may indeed appear calm, but he’s also incredibly energetic — and he comfortably embodies multiple identities: an Englishman, a German, a Jew; a Holocaust survivor with a spirit of joie de vivre.

The Berlin native in an interview with JTA described his family — he had a twin brother, Joachim, and an older sister, Ruth — as strictly Orthodox and culturally German. His father attended an independent Orthodox synagogue that attracted Jews who were unhappy with the increased liberalization of the official community.

“My mother was afraid that because of the indirect connection with [Josef] Goebbels, we might be on an early list for deportation,” Wolff said.

In 1939, they left Amsterdam for England, where Wolff  and his brother attended the Hendon County Grammar School. When the school’s deputy headmistress summoned students to discuss their career plans, Wolff said he wanted to be a rabbi or a journalist. He became both.

The headmistress, thinking Wolff was quite good at French, got him a one-year scholarship to the French Lycee in South Kensington. Wolff learned typing, shorthand and French there.

The skills would prove to be invaluable. With the war still raging, Wolff’s typing and language abilities – English, German, Dutch, French (he later added Russian) – landed him a job with the Reuters news agency on the outskirts of London in a radio listening station that picked up Russian and German broadcasts. He worked there from 1944 to 1947.

“There were no Allied correspondents [on the Axis side], so this was a way to get hints of official attitudes,” Wolff, who later attended the London School of Economics, told JTA.

In 1954 he started working at the Slough Observer, and eventually joined the staff of the Daily Mirror, moving from domestic issues to foreign policy.

Wolff’s decades of work as a journalist included trips abroad with British Prime Minister Harold Wilson and Foreign Secretary Michael Stewart. Returning from one such trip in the late 1960s, they stopped in Bonn to meet with German Foreign Minister Willy Brandt.

It was the first time Wolff had set foot on German soil since his family had fled the country.

“I was grateful, and even a little proud, to be living and working in Germany, a country where the events of the past had become unimaginable,” he told Wauer. “An overwhelming majority of Germans have accepted responsibility for the consequences of that past and that gave me a feeling of security.”

Meanwhile, toiling as a journalist, Wolff drifted from the Orthodoxy of his youth.

“I have enormous respect and deepest admiration for all biblical scholarship,” he said, “ut the more I got involved with text, the more clear it became to me that every word could not have come from God because God contradicts himself” from one book to the next.

Plus, his parents split up. Wolff’s mother lived with a man without marrying him until after his father died.

“That, too, was unacceptable to some of my Orthodox friends,” he said.

In 1979, Rabbi Sidney Brichto, a leading figure in British liberal Jewish circles, asked Wolff to edit the movement’s newsletter. He realized then that he wanted to return to his early dream of becoming a rabbi.

“I found out about liberal Judaism” — known globally as Reform or Progressive — “which had not been respected by my father or by the Orthodox circles and when I found out about that I suddenly thought, well, maybe I could make a contribution there,” he told JTA.

Wolff was ordained in 1984. He served at several London synagogues when he learned something unexpected: Germany needed rabbis.

For the first time since World War II, the country’s Jewish population was really growing due to the influx of former Soviet Jews after the unification of East and West in 1990. The postwar population of some 35,000 had grown to more than 240,000; synagogues were being built. The Union of Progressive Jews in Germany counts around 4,500 members.

In the spring of 2002, Wolff was tapped by a member of the Central Council of Jews in Germany and appointed head rabbi for Mecklenburg-Vorpommern, serving liberal Jewish communities in Schwerin, Rostock and Wismar. Three years later he was elected deputy chair of the General Rabbinical Conference, a liberal body in Germany that works parallel to the Orthodox Rabbinical Conference there.

Commuting to his three communities in Germany and his home in Henley on Thames, England, Wolff led services and also represented Judaism in public – a role he hopes he “has done with dignity.”

“Whether or not I have succeeded is for others to say,” he said.

East Germany can be tricky terrain to navigate; for Jews and non-Jews, the scars of recent history are fresh.

“The two dictatorships – first the Nazis and then the communists – I think left quite deep and hidden wounds,” Wolff said.

Wolff’s contract as head rabbi in Mecklenburg-Vorpommern ended two years ago, but he continues to work as a volunteer. He has also found another, unexpected role: movie star.

He met Wauer, who is not Jewish, when she was working on her first film, “In Heaven, Underground,” about the historic Weissensee Jewish Cemetery in the former East Berlin.

Wauer “wanted a rabbi to say a few things about halacha [Jewish law], such as why we don’t have two coffins in the same grave, and no other rabbi in Berlin would play ball with her,” Wolff said.

The documentary was released to acclaim in 2011. Wolff, with an on-screen presence one reviewer described as “pure gold,” became a favorite among audiences, some of whom started asking Wauer to make a film about the rabbi himself.

The popular result profiles Woolf as he shuttles between England and Germany, conducts services, attends the Ascot races in a dapper top hat, and digs through the piles and piles of books and periodicals that crowd his Henley bungalow.

Not one to dwell darkly on the past, Wolff acknowledges one regret: “If there is anything I regret then it is the fact that I never married and never created a family,” he told Wauer. “I can hardly believe that I am as old as I am but have no children or grandchildren.”

As for his newfound fame from “Rabbi Wolff — A Gentleman Before God,” Wolff told JTA, “I take these things in my stride, and I lose no sleep over it.”

After a 2016 screening in Berlin’s Kino Toni, the audience, virtually all non-Jews, flocked around a small table holding their copies of the accompanying book for the rabbi to sign.

“I don’t see any bitterness in him,” a woman commented later. “He is a very important ambassador for people in Germany who know nothing about Judaism and have many clichés in their heads.”