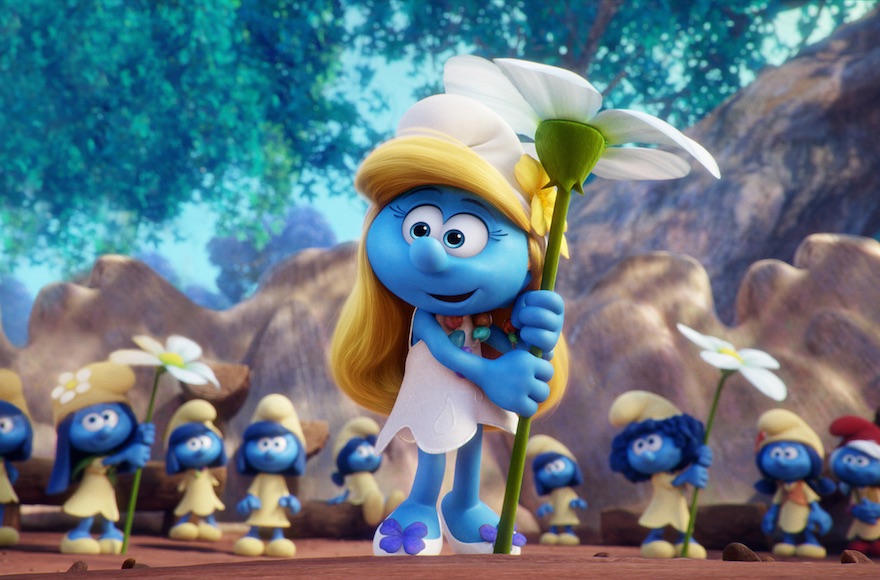 Smurfette was removed from posters for "Smurfs: The Lost Village" in an ultra-Orthodox neighborhood in Israel. (Sony Pictures Animation)
Advertisement

(JTA) — It’s common for posters in haredi Orthodox neighborhoods in Israel to be scrubbed clean of women, out of respect for the community’s stringent modesty standards.

In 2015, Jennifer Lawrence was removed from posters promoting the final “Hunger Games” movie in both Jerusalem and Bnei Brak, a densely populated city with a huge haredi Orthodox population. The furniture giant IKEA has published men-only catalogs for the haredi market.

But this time the latest casualty in the “modesty wars” is not a flesh-and-blood woman  but a Smurfette, a blue cartoon creature who stars in the latest “Smurfs” movie.

While a Smurfette — differentiated from three presumably male Smurfs only by her long blonde hair and six cartoon eyelashes — graced billboards across Israel for “Smurfs: The Lost Village,” she was nowhere to be found on the posters in Bnei Brak.

The film’s distribution company decided to erase the blue-bodied beauty from posters in order not to offend residents, according to the Israeli daily Haaretz, which shared a photo of the poster showing only the three male Smurfs. The company, Forum Film, also told Haaretz that it is common practice not to feature women on posters in Bnei Brak.

We're not sure whether to laugh or cry #SmurfsMovie https://t.co/DRRGPfm1Ei

Not all Orthodox communities in Israel are on board with the strict gender-separation represented by the haredi community. Modern Orthodox Jews are among those active in pluralistic groups like the Yerushalmit Movement, Women Changing Jerusalem and Yerushalmim, which have put up their own advertisements featuring pictures of women.