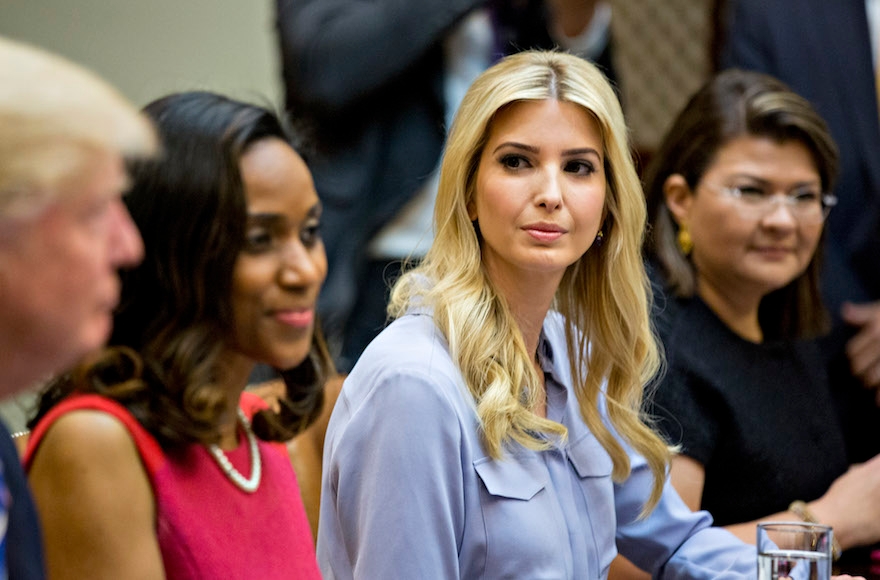 Ivanka Trump at a meeting with women small business owners in the Roosevelt Room of the White House, March 27, 2017. (Andrew Harrer-Pool/Getty Images)
Advertisement

(JTA) — Ivanka Trump will become an official government employee acting as a special adviser to her father, President Donald Trump.

Last week, it was reported that the president’s Jewish daughter was working out of a West Wing office and was in the process of receiving a government security clearance.

But in statement Wednesday, Ivanka Trump acknowledged concerns that her informal role exempted her from federal ethics regulations.

“I have heard the concerns some have with my advising the president in my personal capacity while voluntarily complying with all ethics rules, and I will instead serve as an unpaid employee in the White House office, subject to all of the same rules as other federal employees,” Trump said, according to the New York Times.

“Throughout this process I have been working closely and in good faith with the White House counsel and my personal counsel to address the unprecedented nature of my role,” she said.

Ivanka Trump had said during the transition that she would not play a formal role in the administration when she moved to Washington. She also said she would continue to fight for women’s issues, including maternity leave and child care.

Jamie Gorelick, a lawyer for the first daughter, said the choice was based on “her commitment to compliance with federal ethics standards and her openness to opposing points of view,” the New York Times reported.

“She will file the financial disclosure forms required of federal employees and be bound by the same ethics rules that she had planned to comply with voluntarily,” Gorelick said.

A spokeswoman for the president praised his daughter’s new role.

“We are pleased that Ivanka Trump has chosen to take this step in her unprecedented role as first daughter and in support of the president,” the spokeswoman said in an email to the Times. “Ivanka’s service as an unpaid employee furthers our commitment to ethics, transparency, and compliance and affords her increased opportunities to lead initiatives driving real policy benefits for the American public that would not have been available to her previously.”