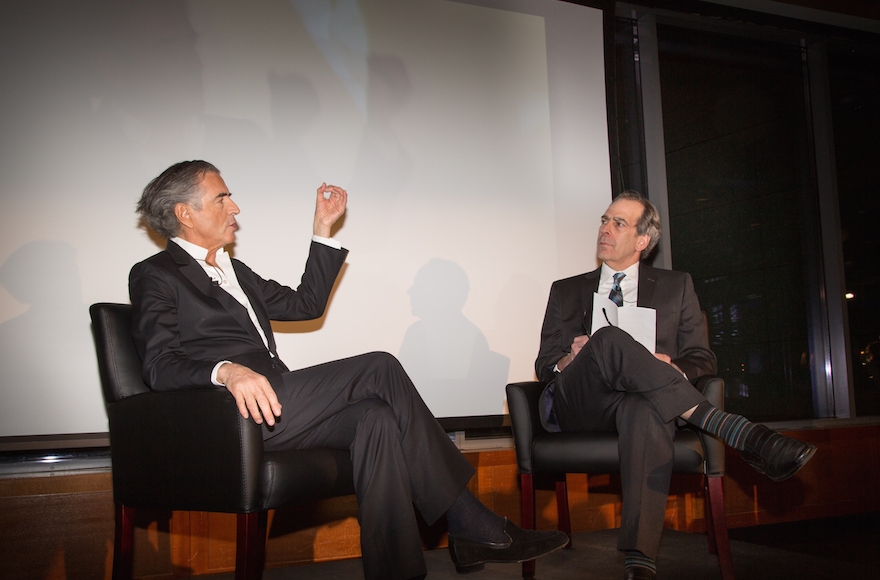 At the celebration, which took place Monday evening at New York’s Museum of Jewish Heritage-A Living Memorial to the Holocaust, JTA editor-in-chief Andrew Silow-Carroll interviewed Lévy about his views on anti-Semitism, Israel and the situation of Jews in Europe.

During his remarks, Lévy praised JTA’s values as “a match with the best of the Jewish tradition.”

“The relationship between the Diaspora and Israel as it appears in the history of JTA, the dialectic between the two poles of Jewish life, is very remarkable,” he said.

The evening’s honorees were Brian Sterling, the principal and co-head of the investment banking group of Sandler O’Neill + Partners, L.P.; Jane Weitzman, the former executive vice president of Stuart Weitzman and founding vice president of Stuart Weitzman Retail, and Mark Wilf, an attorney and partner in the real estate development firm Garden Homes and an owner of the National Football League’s Minnesota Vikings.

Sterling — in addition to highlighting JTA’s continuing importance as a source for credible, unbiased reporting — stressed the critical role that JTA and 70 Faces Media must play in creating and strengthening Jewish community.

“I am increasingly concerned that our community, this bond, is under stress and may be fraying,” Sterling said. “It is only by making connections, sharing news and information, that we build and preserve our community, and our sense of self. … We need to connect Jewish people with each other and their communities in more ways, over an ever-broadening array of channels, styles and approaches. And this is the work of 70 Faces Media.”

Weitzman stressed the importance of JTA and 70 Faces Media in helping new generations develop a sense of concern and responsibility for the needy in the Jewish world. She urged 70 Faces Media to create a portal  where users can learn about important Jewish causes and opportunities to support organizations that are working to address them.

Wilf recalled his late father, real estate magnate and philanthropist Joseph Wilf, and his commitment to the local Jewish newspaper. “JTA was the silent partner to Jewish newspapers — the Jewish Associated Press — and was the eyes and ears on behalf of the Jewish people,” Wilf said. “Today, the world has much more information at its [fingertips].Which makes JTA’s incredible legacy of truthfulness, thoroughness, and fairness — nurtured over its first century — even more critical to cut through the clutter.”

Two of the organization’s past presidents, David Eisner and Elisa Spungen Bildner, introduced the honorees, who were being recognized for their guidance and longstanding support of JTA as well as the merger that created JTA’s new parent company, 70 Faces Media. Eisner and Spungen Bildner, along with their respective spouses, Karen Lehmann Eisner and Rob Bildner, served as the co-chairs of the gala.

The president of 70 Faces Media, Daniel Gorlin, introduced Lévy, thanked the honorees and gala co-chairs, and recognized several other former JTA presidents who were either in attendance or planned to be there: Caryn Rosen Adelman, Robert Arnow, Julius Berman, Danny Krifcher, David Rudis and Marshall Weinberg.

Ami Eden, CEO and executive editor of 70 Faces Media, spoke of the news agency’s historic legacy, including its groundbreaking reporting on the Holocaust in Europe as well as its direction in the 21st century.

“No one can say the world did not know; no one can say that the Western press did not know. Because, day by day, JTA doggedly reported every step in Hitler’s war against the Jews,” said Eden, who formerly served as JTA’s CEO and editor-in-chief. “Tonight we pay tribute to the JTA reporters and editors whose bravery and determination during the Nazi era elevated journalism to a holy calling.”

Eden said that JTA continues to play a vital role in providing credible bias-free reporting, adding that “today the role of a Jewish media organization cannot only be to inform the already initiated. It must be to engage new audiences, empower them as they explore their Jewish identity and think about what role Jewishness will play in their lives, and provide them with comfortable, open and authentic ways to connect with each other.”

70 Faces Media and its brands — including Kveller, Nosher and My Jewish Learning — fulfill these expanded needs, Eden said.

Founded in The Hague in 1917 by 25-year-old Austrian journalist Jacob Landau and renamed the Jewish Telegraphic Agency in 1920, JTA provides reporting to over 65 media outlets and directly to readers though its own website and social media.