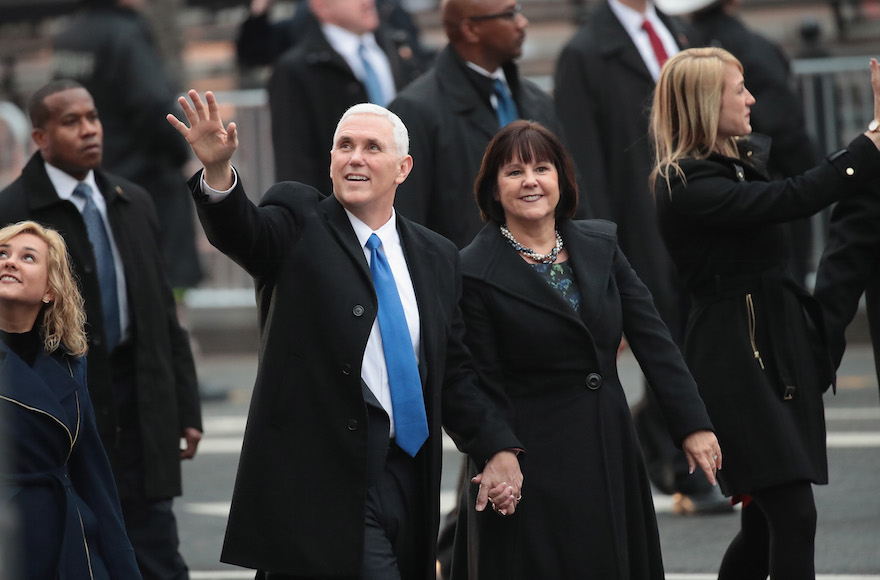 (JTA) — I am a huge fan of monogamy. My wife and I have been married for — well, let’s just say we met in high school (we didn’t get together until after college, but I was trying to avoid saying “a long time”). I took it personally when Danny DeVito and Rhea Perlman announced they were splitting after 3o years of marriage, and rejoiced at news of their reconciliation. I get weepy when David Attenborough talks about animals that mate for life.

So I get Vice President Mike Pence’s devotion to his wife, and the measures he takes in “building a zone around [his] marriage,” as he once described it. But some of those measures haven’t been well-received, especially on the left. Twitter lit up last week when a profile of Pence in The Washington Post included a snippet from a 2002 interview saying he never eats alone with a woman other than his wife, nor attends events without her “[i]f there’s alcohol being served and people are being loose.”

Critics accused Pence of objectifying women and wondered how he managed affairs of state if he couldn’t meet alone with, say, a female governor or Angela Merkel. Others just found it weird, as if someone who describes himself as “a Christian, a conservative and a Republican, in that order” had dropped in from a previous century.

The more serious criticism noted that women have a hard enough time advancing in business or public service without powerful men treating them as objects of temptation. The conversation recalled a 2015 survey of female congressional staffers in National Journal, in which several female aides reported that they had been blocked from evening events or one-on-one meetings with their bosses out of fears of creating the wrong impression. National Journal quoted an Office of Compliance official saying that any such policy — “official or unofficial” — could be viewed as discriminatory.

“A practice like this means that women can never become trusted advisers or rise to high positions within an office based solely upon their gender,” the official said.

Conservatives, mostly, defended Pence as a family man who deeply respected his wife, and they accused liberals of not taking Pence’s faith seriously or acknowledging the realities of the workplace.

“One doesn’t have to approve of Pence’s personal guardrails to recognize that many Americans consider them admirable — and far more so than the examples set by, say, Donald Trump or Bill Clinton,” opined the Richmond Times-Dispatch.

There were also some inevitable comparisons to the Jewish practice of yichud, in which observant men and women can’t be alone together unless they are married, siblings or parent and child.

“Our Sages, with their deep understanding of human nature, understood well that should people be left to decide on their own what they could or could not do – especially with regard to the powerful issue of intimate relations – men and women might easily put themselves in very problematic situations and might, without wanting to, commit capital transgressions,” Rabbi Y. Dov Krakowski wrote in The Yeshiva World News. “For these reasons our Sages constructed a number of ‘barriers,’ of steps to keep people from falling into such traps.”

The laws of yichud are detailed; for example, a man and woman can’t share an office unless “there is the realistic expectation that another office worker may enter at any moment” (in other words, there are no locks and plenty of people around). Rabbis are asked whether it is OK for a man and an unrelated woman to work in the same empty building, even if on different floors; whether it is OK to consult alone with a doctor of the opposite gender; whether a young man can be alone in a house with a maid.

But nearly all of these cases are about seclusion, not about meeting with someone in a public place. If Pence didn’t want to be alone in his office after work hours with a women other than his wife, the rabbis would approve. They also wouldn’t have much of a problem if he dined with a female colleague in a restaurant.

The discussion about Pence’s marriage “zones” exposed a few societal gaps. Behavior that is considered perfectly reasonable among religious people can seem bizarre to outsiders, even insidious. A little respect is due.

Others see a conservative-liberal gap. Liberals, with their essentially optimistic view of human nature, think individuals should be able to take responsibility for their own behavior and resist temptation. Pence, wrote Alexandra Petri in The Washington Post, “is living life with the assumption that he lacks the modicum of self-control involved in eating dinner with another human being and not committing adultery.”

Conservatives, on the other hand, who believe in sin and the general fallibility of humankind, think it only realistic to build fences around temptation. That was Damon Linker’s point in a Twitter thread The Weekly Standard contributor wrote on the subject: “One morality-abiding, bodily transcending subject should be able to have dinner w another w/o incident. Right?” he asked, summarizing the liberal position, before providing the conservative response: “Pence’s way of living denies all of this. It denies we’re able to restrain ourselves with any reliability. We need God’s help, and we need to keep ourselves away from situations in which we will be tempted to cheat.”

That’s one way of invoking God. But there is another.

In 1983, in an essay in the seminal collection “On Being a Jewish Feminist,” Cynthia Ozick noted how the Jewish laws that end up suppressing women as scholars and communal leaders are predicated on the idea of male temptation.

“Much of the vast structure of Jewish segregation of the sexes rests on the fear of male temptation, on the so-called weakness of males in the face of ‘distraction,'” she wrote. “Yet all Jewish practice requires restraint, dedication, and concentration. … Is an observant Jew, whose life is nearly defined by the practice of restraint, a more libidinous creature than other males?”

Pence’s secular critics may lack an appreciation for the religious point of view. But are they wrong to think that a religious person should be able — all the more so, as the rabbis say — to draw on his or her own faith to keep from committing “capital transgressions”? If religion isn’t developing its adherents’ sense of restraint and propriety, then what’s the point exactly?