The Israeli response to the Syrian chemical attack? A wave of donations. 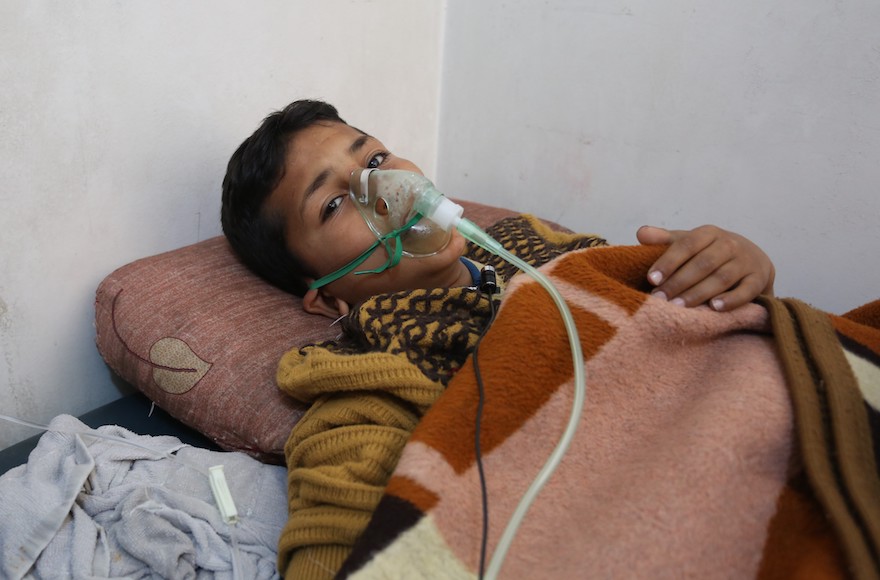 TEL AVIV (JTA) – In response to the alleged chemical attack in Syria on Tuesday, Israelis have donated hundreds of thousands of shekels to help children and others caught in the conflict raging on their northern border.

With Israel maintaining a policy of noninterference, giving money has been a way for people here to respond to the brutal six-year civil war. Donations have spiked since the release of a video seemingly capturing the gruesome aftermath of the attack, which killed at least 72 people, including many children.

“The response has been amazing,” Yoav Bakshi-Yeivim, one of about a dozen founders of the group and a Jerusalem City Council member, told JTA. “Our campaign is just a drop in the sea, but it’s made people feel they can do something and not just watch. I think if countries around the world had campaigns like this, we would make a big difference.”

Bakshi-Yeivim, whose grandmother survived the Holocaust, said the group chose its latest fundraising target in honor of the 1.5 million children killed by the Nazis.

Meanwhile, IsraelGives, an online donation organization, in a few days has exceeded its initial goal of raising 200,000 shekels ($55,000) thanks to more than 900 donors. The group has pledged to send medical aid to Syrians through Israel Flying Aid, which is also Just Beyond Our Border’s partner.

“No Jew can stay silent as children are being gassed in the streets of Syria,” its fundraising page reads. “We cannot sit back any longer and watch the horrors play out. We need to act, and here is a way.”

Arik Marmorstein, the co-founder of Mimoona, the popular crowdfunding platform on which Just Beyond Our Borders launched its campaign, said the effort would soon be the country’s most successful ever.

“You don’t see campaigns like this. People want to donate,”Marmorstein told JTA. “It’s obviously related to the Holocaust, with Yom Hashoah coming up [on April 23]. And geographically it’s happening so close to us.”

The media in Israel in recent days have been filled with talk of Tuesday’s attack on the rebel-held village of Khan Sheikhoun, which has provoked worldwide outrage and calls for action. And the video — showing people, including children, gasping for breath and foaming at the mouth — has been widely circulated on social media, eliciting horrified comments.

The United States, Israel and other countries have blamed Syrian President Bashar Assad for the attack. He has denied responsibility. The U.S. responded to the attack with a missile attack early Friday on a Syrian airfield.

Israeli leaders welcomed the move, but the country has seen little upside to intervening itself, even as hundreds of thousands of people have been killed and millions displaced by the war. An outright victory by either Assad or the myriad rebel groups fighting his regime would likely threaten the Jewish state. Nor has Israel accepted Syrian refugees, though it has treated thousands of the war’s wounded.

In an interview published Thursday, Defense Minister Avigdor Liberman condemned the “murderous chemical weapons attacks on citizens.” But he said the world, not Israel, must be expected to respond.

“Why do we need to take the chestnuts out of the fire? This is the responsibly of the international community,” he said. “I am not prepared to be the shmuck that the whole world pisses on. The world should take responsibility instead of just saying it will.”

Most Israelis seem to agree. Even activists working on behalf of Syrians caught in the war did not see Israeli intervention as part of the solution. Yossi Saidov, the spokesman for Israeli anti-racism group Tag Meir, which shared Aharish’s video, said Israelis know the geopolitics of getting involved in Syria, Israel’s historic enemy with which it has fought multiple wars, would just be too complicated.

“We understand that if we try to get involved in the civil war, it will be a political problem. All the world could turn against us,” he told JTA. “But seeing dying children is horrible, especially when they are dying from gas. It is happening just a few kilometers from our border, and we believe something should be done, just as as Jews, we expected America to try to save us during the Holocaust.

“I think these are the strong feeling among Israelis,” he said.

Indeed, at a December protest organized by Tag Meir, the focus was on calling for the United States and Russia to find a solution. Among the hundreds of Israelis who formed a human chain between the two countries’ embassies in Tel Aviv, it was hard to find anyone who thought the Israeli military should get involved in Syria.

“I’m doing the only thing I can because I’m feeling a bit powerless in this entire ordeal,” a demonstrator who gave his name as Lior told JTA at the time. “We have to do something. So I donated some money. I’m standing here.

“I’m not sure if it means something, or if it has the potential to change anything.”

Asked why he did not protest the Israeli government in Jerusalem, Lior said, “What can we do, send our army into Syria? That makes no sense.”