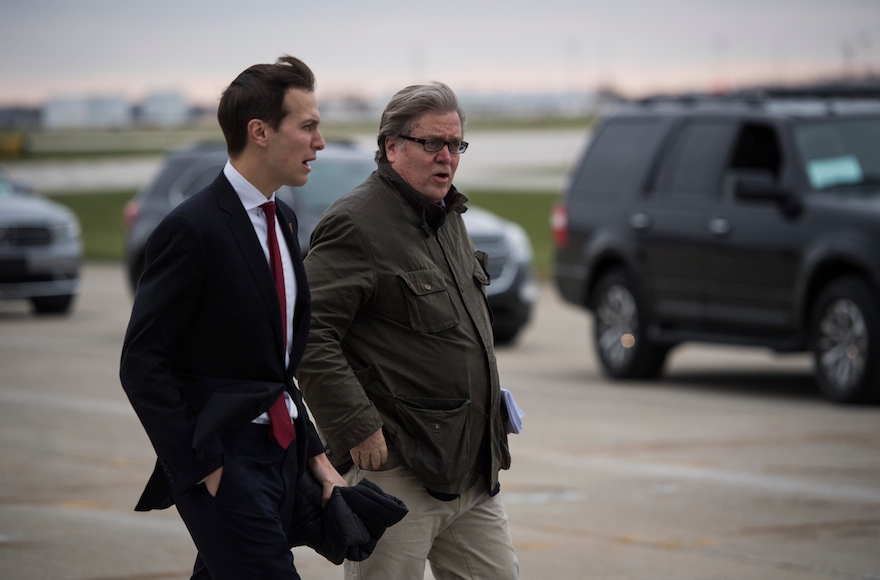 (JTA) — President Donald Trump’s top strategist, Stephen Bannon, and his adviser and son-in-law Jared Kushner reportedly met in an attempt to smooth tensions that have roiled the administration.

White House Chief of Staff Reince Priebus ordered the meeting at the request of the president, according to reports. The meeting was confirmed to the political news website Politico by two unnamed White House officials.

Reuters cited an unnamed White House official in reporting that Priebus’ message to Bannon and Kushner was to “stop with the palace intrigue” and focus on the president’s agenda.

Both aides left having agreed that it was time to “bury the hatchet and move forward,” the official said, according to Reuters.

Rumors have surfaced about an upcoming White House shake-up that could see Bannon and Priebus leaving their positions.

News of tensions between Bannon and Kushner, who reportedly were close during the campaign, followed Trump’s order last week removing Bannon from the National Security Council.

According to the reports, Kushner believes Bannon went too far in pushing for the Muslim travelers’ bans and in playing hardball with Congress in an attempt to replace the Affordable Care Act, also known as Obamacare. Both initiatives failed.