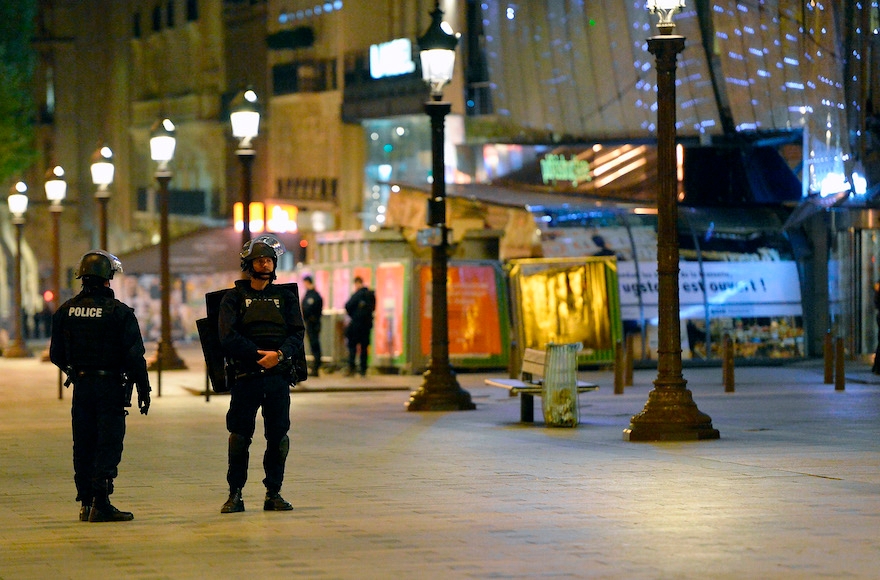 Police securing the area after a gunman opened fire on the Champs Elysees in Paris, April 20, 2017. (Aurelien Meunier/Getty Images)
Advertisement

(JTA) — A prominent Jewish supporter of the far-right presidential candidate Marine Le Pen in France blamed the current government for the death of a police officer in a suspected terrorist attack in Paris.

Michel Thooris, a police officer from southern France, was referencing the slaying Thursday evening of a policeman who was shot dead with a semi-automatic assault rifle on the Champs-Elysees shopping street.

Police killed one man whom they said was armed shortly after the shooting, in which two others were severely wounded. On social media accounts affiliated with the Islamic State terrorist group, the alleged shooter was identified as Abu Sayif al-Baljiki, 39, of Belgium, the Le Figaro daily reported Friday.

“The perpetrator was flagged for radicalization,” Thooris, a member of the Central Board of Le Pen’s National Front party and head of the Association for Patriots of Jewish Faith, wrote on Facebook. He posted the message on the page of Syndicat France Police, the labor union for police officers he runs.

“He spoke of terrorism on social networks,” Thooris wrote of the suspect. If this information is verified, Thooris added, “the failure to detain a flagged radical was the reason for the death of at least one of our colleagues this evening. Intolerable.”

Shortly after the attack, pundits said it would benefit the hard-line and anti-Muslim Le Pen in the elections, which are scheduled for Sunday with the first round.

Le Pen also took to social networks to criticize the government following the attack in a series of Twitter messages.

“From this weak government of inaction I demand the immediate restoration of our national borders,” she wrote following reports that the main suspect had traveled to France from Belgium, where recent terrorist attacks exposed serious failures in authorities’ ability to track and detain suspected jihadists.

“I demand the immediate expulsion of foreigners flagged for radicalization,” she added in another tweet.

Emmanuel Macron, a centrist candidate, is leading in the polls ahead of the first round with approximately 23 percent of the vote, slightly ahead of Le Pen. The Republican candidate, Francois Fillon, whose campaign has suffered because of his recent indictment on corruption charges, and the communist candidate Jean-Luc Melenchon are each drawing 18-20 percent in the polls.

Whoever wins the first round on Sunday will run against the second-place candidate in the final round in early May.

Francis Kalifat, the president of the CRIF umbrella group of French Jewish communities, added his voice to the many condemnations of the attack.

“Sadness and anger following the attack at Champs-Elysees,” Kalifat wrote on Twitter. “Our thoughts go to officer killed and to the wounded and their families. Support for the police forces.”

Haim Korsia, the chief rabbi of France, also thanked security forces on Friday during an interview with the RCJ Jewish radio station.

“I want to express all our solidarity and participation in the pain of the families of security personnel who literally place themselves in the line of fire, shielding citizens from perpetrators,” he said. “We pray for them, for their families and for the safety of those still protecting us.”

Following the murder of four Jews at a kosher shop in Paris in 2015, the French government deployed 12,000 soldiers and police officers around Jewish institutions.