No one is assigned to Jewish outreach at the DNC. Who ya gonna call? 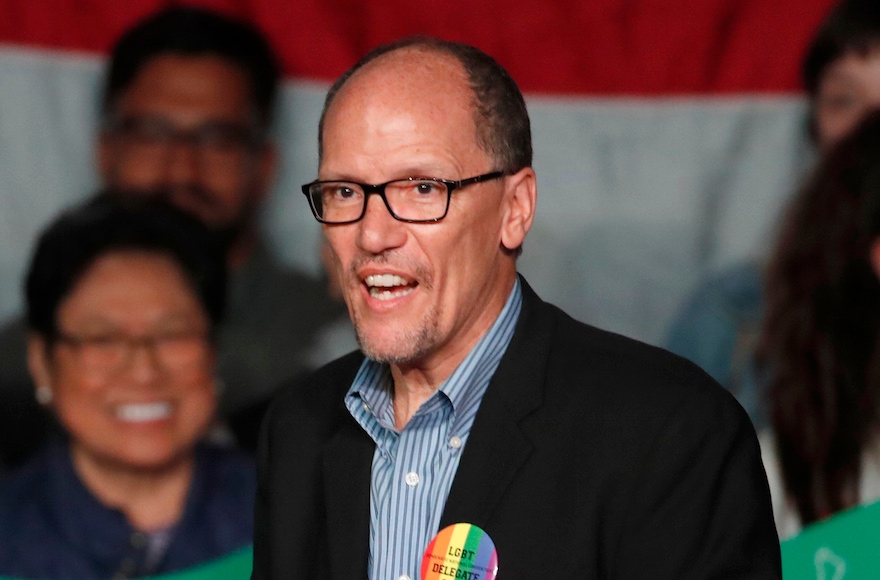 WASHINGTON (JTA) – You’re a Jewish donor or macher and you need to talk to someone at the Democratic National Committee, stat. Who’s most likely to return your call?

Tom Perez, the party chairman, according to Jewish and Democratic insiders.

Perez is also pretty much it – no one else is handling Jewish issues right now.

Business Insider posted the DNC’s assigned roles for its officers on April 19. Liaisons were included for blacks, women, Latinos, Asians, LGBT, farmers and various regions – but not the Jewish community.

For a party that prides itself on cultivating an array of constituencies, the absence of a dedicated Jewish staffer seems anomalous to many Jewish Democrats, especially considering that DNC liaisons are available to a range of other minority groups.

“It’s of the utmost importance to have a DNC staffer handling this vital DNC constituency,” said one Jewish Democratic activist, who like many others asked to speak on background because of the sensitivity of criticizing a party seen as under siege since the devastating November elections.

“There are plenty of good operatives who are available after the disappointing performance in the presidential election, and it’s puzzling they haven’t found one yet and it’s concerning they haven’t got someone doing this full time,” the Jewish Democrat said. “I like Tom Perez, but they’re really dragging their feet.”

Perez, who was elected in February, named liaisons to other communities two weeks ago.

“Jewish Americans have always had a home in the Democratic Party, and part of Tom’s agenda is to re-establish our constituency outreach efforts with a big focus on constituencies of faith,” Eric Walker, a DNC spokesman, told JTA.

“From speaking at AIPAC to meeting with the Conference of Presidents of Major American Jewish Organizations, Tom has made outreach to the Jewish community a personal priority,” he said. “The Jewish community will continue to play a vital role in the Democratic Party, particularly as Jewish community centers and schools are being targeted, and as the Trump administration seeks to divide us.”

Walker said hiring was taking place at a pace appropriate to a post-election restructuring.

“The DNC staffing level is at a low,” he said. “The transition team is in the process of restructuring the entire building to meet the needs of today, and as we approach 2018 we need to ensure that we are reaching all voters in every state. The DNC will be staffing up very soon and will absolutely be ramping up its efforts to reach out to all communities, including the Jewish community.”

Jews have long been a key constituency for Democrats, and not just because their donations make up a third to a half of the DNC’s support. They are also a key vote in swing states like Florida, Pennsylvania and Ohio, and have proven to be among the most dedicated organizers over the decades.

DNC officials and those close to them outlined various reasons why the party was slow to name a dedicated staffer or officer to deal with the Jews. Among them:

* Perez has cleared out much of the DNC staff, wanting to dismantle the perception lingering from the primaries that the committee was a redoubt of the establishment, and to reconcile the camps loyal to candidates Sen. Bernie Sanders, I-Vt., and Hillary Clinton. He is still in the slow grind of hiring replacements.

* The liaisons listed by Business Insider were elected DNC officials who happened to have close ties to the communities they were assigned. Jewish candidates ran in the most recent DNC elections, but none won. (Notably, there are three Jews on a separate 21-person commission formed to advance party unity — one each named by Sanders, Clinton and Perez.) Had a Jewish candidate been elected to the DNC executive, he or she likely would have been a liaison to the community. Rep. Debbie Wasserman Schultz, D-Fla., the last DNC chair, fulfilled that role.

* The whole party increasingly embraces Sanders’ argument during last year’s campaign that identity politics is alienating white working class males; minority liaisons are not the priority they once were.

* Perez, who launched his political career in Montgomery County, Maryland, which has a disproportionate Jewish population, is intimately acquainted with Jewish issues. (Those who attended his briefings at the Presidents Conference and at the American Israel Public Affairs Committee gave him high marks for nuanced, detailed takes on the issues.) A Jewish liaison would be redundant (although Wasserman Schultz also employed a dedicated Jewish liaison).

* Jews still reliably vote Democratic. Clinton received 71 percent of the Jewish vote in November, according to exit polls. Outreach to a loyal block of votes isn’t an immediate priority.

That attitude frustrates Rabbi Jack Moline, who in 2014 directed the National Jewish Democratic Council. Even with such overwhelming support, there are always ways to get out the Jewish vote, he said.

“If we are indeed a dependable constituency for the Democratic Party, it would seem the Democrats would want to mine that for other opportunities,” Moline said.

The absence of a dedicated Jewish liaison comes at a sensitive time, posing challenges and opportunities for Jewish Democrats:

* Perez’ closest rival in the DNC election, Rep. Keith Ellison, D-Minn., is among the Congress members most critical of Israel and decades ago worked with the anti-Semitic Nation of Islam movement. Now Perez’ deputy, Ellison has long since apologized to Jews for that association — although his critics insist that his prominence in the party should be of concern to Jews.

* What it means to be a pro-Israel Democrat is in flux, with much of the party and most of its lawmakers – among them nearly all its Jewish caucus – alienated by Prime Minister Benjamin Netanyahu’s outright hostility to former President Barack Obama.

* Israel remains the key issue for many baby boomer Jewish Democrats, while younger Jews in the party are more preoccupied with confronting President Donald Trump and his associations with the far right.

* Trump’s closeness to the “alt-right,” the loose assemblage of hyper-nationalists who induce a visceral revulsion in liberal Jews, should be an opportunity to cultivate Jewish donors and voters.

Donors, for instance, are known to make anxious calls when criticism of the party’s Israel posture hits the papers. A skilled liaison would know whether the criticism was serious or was right-wing trolling, and would be able to explain the difference to the donor, the activist said.

“You have to be able to differentiate between genuine constructive criticism that’s coming from a good place and the noise from people who wouldn’t support you in the first place,” he said.

Another concern is that the party reverts to a model used in the past, when a single senior staffer handled all faith outreach, supervising junior staffers assigned to the Jews, Catholics, Protestants and Muslims.

A Jewish Democrat who has held multiple roles within the party said that model did not adequately address a community that saw itself as more than simply a faith.

“It’s not like Christianity or Islam, a faith, it’s a peoplehood or an ethnicity,” said this Democrat. “To make that distinction is important to the Jewish community.”

Moline, who now directs the Interfaith Alliance, an advocacy group, said the reflex in the party to treat Jews as just another faith frustrated him.

“It was indeed a challenge to persuade the folks I was interacting with that Jewish self-identification was not the same as Christian or Catholic or Muslim self-identification,” he said. “I would explain that the Jewish community was more motivated by issues than by faith. Speaking the language of faith was not going to have the same impact to communities organized around the federation rather than the church.”

Steve Rabinowitz, who runs a media consultancy advising Democratic and Jewish organizations, said he was confident Perez would name a liaison in good time, if only for appearance’s sake. Rabinowitz gave Perez high marks for his outreach to the Jewish community.

“Do they need it?” Rabinowitz said of anxious Jewish Democrats. “Eh. Are they going to get it? Yes.”