I’m Jewish and I just became an EU citizen. It feels a little like boarding the Titanic. 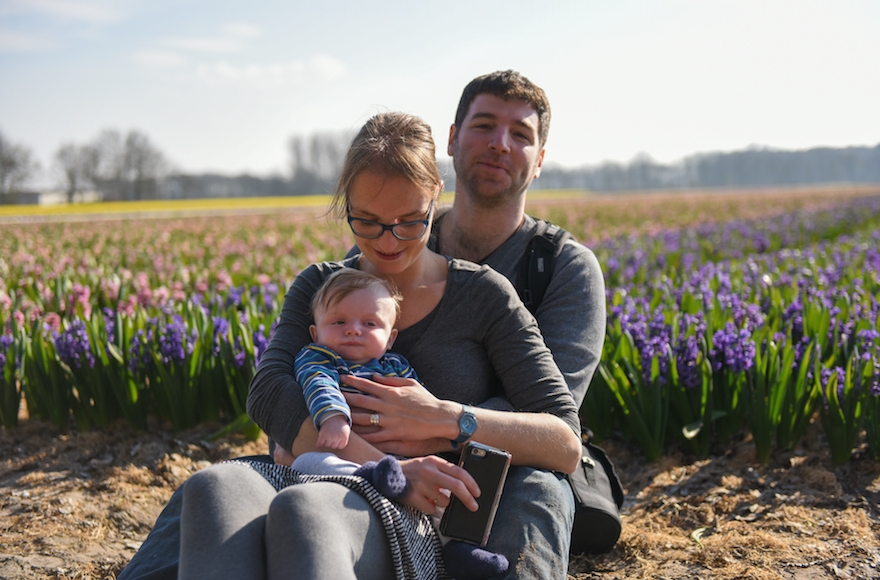 Cnaan Liphshiz, his wife and eldest son in a tulip field near Amsterdam on April 3, 2016. (Courtesy of Liphshiz)
Advertisement

AMSTERDAM (JTA) — Considering Marine Le Pen’s historical gains in the French presidential elections, the Dutch far-right’s rise and the assault on ritual slaughter in Belgium, this spring is shaping up to be a life-changing time for Europe — its religious minorities in particular.

In other words, it’s showtime for journalists such as myself, who specialize in covering exactly those minorities.

All around me, a continent traumatized by Islamist terrorism, and the waves of xenophobia it is triggering, is holding its breath to see if France will compound last year’s anti-establishment votes in Britain and the United States by electing a nationalist leader who has vowed to dismantle the European Union.

Normally I’d be eager to join the fray, reporting these events and their implications for the Jews of Europe. However, I’ve had some life-changing events of my own.

The first: Last week, my wife gave birth to our second child. And then, an hour later, I left them in an Amsterdam maternity ward to attend a naturalization ceremony that had been scheduled months before.

I took my first-born, an 18-month-old boy, with me to city hall for the event, in which I and dozens of other immigrants swore allegiance to the Dutch kingdom, becoming full citizens of the Netherlands as our friends and relatives cheered.

Toasting with my father, who is Dutch, alongside hundreds of old and new Dutchmen from 40 countries, I was celebrating both my initiation into a country that has always been a second home to me as well as my newest contribution to its population’s (negative) growth rate.

And yet, holding a plastic cup of lukewarm bubbly, I was seized by fear of the storm clouds gathering on the horizon. I worried about the future of my young family, dwindling community and adoptive country.

At the ceremony, a municipal official urged us to treat each other with respect, saying mutual respect was the only way to ensure our ability to continue to build our city, country and the European Union.

“This is a place defined by centuries of tolerance, where you can be who you are,” he said.

But after living here for six years as a permanent resident and starting a family here, I have my doubts about that.

Did a majority of Dutch lawmakers show respect and tolerance for the country’s religious minorities when they passed a ban on ritual slaughter in 2011 — despite passionate pleas by Jews, Muslims and many Christians?

The prohibition eventually was overturned by the Dutch Senate. But in recent weeks, two of Belgium’s three regions introduced plans to ban the custom, ignoring the pleas of a Jewish community leader to “not repeat the actions of the Nazis,” who had introduced Belgium’s previous ban.

“Mutual respect” was not what guided nearly 1.5 million voters in the Dutch elections in March to support the Party for Freedom, an anti-Islam, far-right movement whose leader was convicted of inciting discrimination when, in a 2014 speech, he promised voters to ensure Holland has fewer Moroccans. It was the Party for Freedom’s best result ever, making it the country’s second-largest party for the first time.

The mayor of Rotterdam, a practicing Muslim who was born in Morocco, did little to uphold tolerance when he okayed a Hamas rally in one of the city’s main venues last month and banned a protest against the event.

And mutual respect was not a hallmark of Schilderswijk, the neighborhood in The Hague where I first lived when I moved from my native Israel in 2011.

A predominantly Muslim quarter, in 2014 it was home to several rallies featuring chants about murdering Jews. Plus, while we lived there, my Amsterdam-born wife experienced frequent harassment on the streets —  a problem known to many women in the area who happen to wear a skirt or just look European.

These realities are hardening the attitudes of the general population, leading to a rise in far-right populism.

And that, in what is becoming a self-sustaining cycle, in turn is pushing more Muslims to extremism: The Dutch March elections saw a radical Muslim party, DENK, enter parliament for the first time. The party is opposed to integration, and its leader refused to shake Israeli Prime Minister Benjamin Netanyahu’s hand during a recent visit to The Hague. DENK received 210,000 votes, including half of the ballots in Schilderswijk.

Conventional wisdom says that education is the key to breaking the cycle. But a recent visit to several schools in my new neighborhood didn’t provide me much assurance — I wasn’t convinced of their suitability to achieve this, nor did I sense they were particularly welcoming environments for my children.

One school raised our suspicions when they invited us to visit when no students were present. In other schools we visited, the student bodies were predominantly Muslim. And while my wife and I value diversity, we wondered whether our kids would be treated respectfully and with tolerance the next time Israel and Hamas duke it out in Gaza.

The near-total disappearance of Jewish pupils from France and Belgium’s public schools due to anti-Semitic harassment suggests otherwise. The alternative of sending them to a distant Jewish school that is under the constant protection of an elite Dutch police unit also comes with problems. After the 2012 murder of four Jews at a Jewish school in Toulouse, enrolling them in a Jewish school feels like turning them into a target.

To me, these realities underline the gap between the city official’s promise of tolerance and the worrisome signs that it’s running out in the very society to which he welcomed me. The gap made me feel lied to, which in turn made me angry and distrustful — the two sentiments that are driving the accelerated polarization of Western European societies and threatening the viability of the European Union.

In the United Kingdom, such anger led a majority to support the country’s exit from the EU. 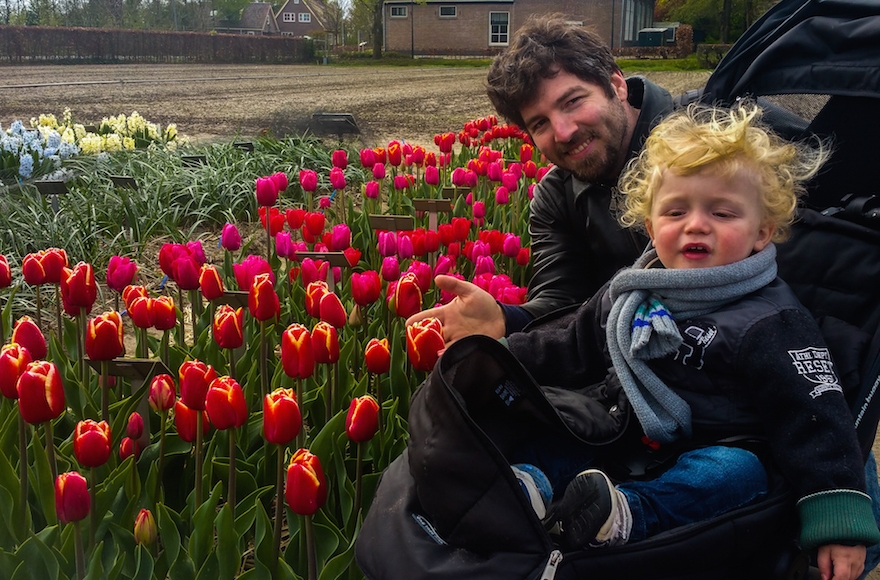 Cnaan Liphshiz and his eldest son at the Hortus Bulborum tulip museum near Amsterdam, March 31, 2017. (Courtesy of Liphshiz)

In France, similar anger led to Le Pen’s success in the first round of the presidential elections on April 23, in which she trailed the pro-EU centrist candidate Emmauel Macron only by 2 points. It was the best electoral achievement by her National Front party, which was founded in the 1970s by her father, the anti-Semitic Holocaust denier Jean-Marie Le Pen.

Even if, as polls project, Macron beats Le Pen 60-40 percent in the final vote on May 7, she will still have more than doubled the showing of 18 percent that her father had in 2002 – the first time the National Front made it to the second round.

In Jewish communities across Western Europe, the rise of Marine Le Pen – who despite distancing herself from the rhetoric of her father has vowed to ban ritual slaughter as well as the the wearing of both the kippah and Muslim garb in public – is seen as an existential threat.

Rabbi Berel Lazar, the Italy-born chief rabbi of Russia, has called on the Jews of France to leave if she is elected. And Rabbi Menachem Margolin, the director of the European Jewish Association, said that voting for Le Pen is tantamount to saying that Jews “are not welcome” in France — home to Europe’s largest Jewish community (500,000) and the third largest in the world.

I, too, fear a future where Le Pen is president. And I worry that her successes so far portend a new and sad chapter in the troubled history of Jewish life in France — and, before long, across the continent.

Indeed, Rabbi Pinchas Goldschmidt, the Luxembourg-born president of the Conference of European Rabbis, told me that he believes that Le Pen’s popularity already is emboldening initiatives to ban ritual slaughter and circumcision in Belgium and beyond.

Meanwhile, at my naturalization ceremony, my dad held my eldest, who cheered with a twinkle in his eyes when I got on the stage and declared allegiance to his native country.

But on the podium, I found myself thinking of something Marine Le Pen said in a recent interview.

The European Union, she said, “is shining with the light of a dead star.”