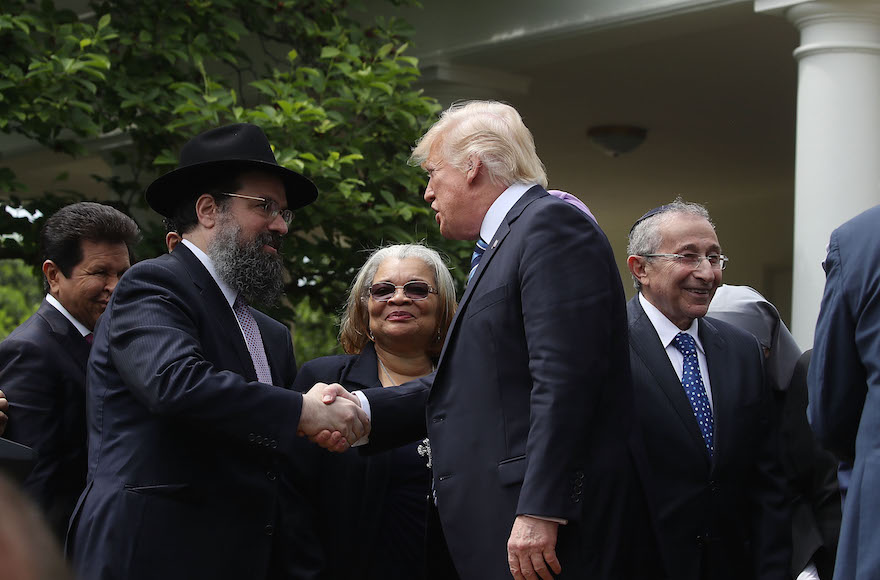 (JTA) — Jewish groups largely came out against a new executive order allowing clergy to endorse or oppose candidates from the pulpit, fearing that it will erode the separation between church and state.

The order, which President Donald Trump signed Thursday at the White House on the National Day of Prayer, effectively reverses a 1954 regulation called the Johnson Amendment that prohibited houses of worship and faith groups from endorsing or opposing candidates. Offending houses of worship would lose their tax-exempt status.

Trump has long promised to do away with the law, which he sees as restricting religious freedom, but Jewish organizations had urged him to leave it intact.

On Thursday, several Jewish groups and leaders came out against the executive order, saying the amendment was a bulwark that prevents the mixing of prayer and politics. They noted that religious groups are free already to advocate for issues and political causes, if not candidates.

Last month, a range of major Jewish organizations was among more than 4,000 nonprofit groups that signed a letter in support of the Johnson Amendment.

“Clergy and communities of faith already raise our voices loudly on issues of political and social concern,” Rabbi Jonah Dov Pesner, director of the Religious Action Center, Reform Judaism’s legislative advocacy arm, said in a statement Thursday. “The prohibition against endorsing or opposing political candidates from our pulpits simply prevents groups from being simultaneously tax-exempt ministries and partisan political outfits.”

Throughout his campaign and afterward, Trump has maligned the amendment as a muzzle on the free speech of clergy. In February, he vowed to “totally destroy” it.

At the signing ceremony, Trump invoked the history of church-driven social change movements in America, referring to the activism of the Rev. Martin Luther King Jr. during the civil rights movement. He called the amendment “very, very unfair” and told clergy that “you’re now in a position where you can say what you want to say, and I know you’ll only say good and you’ll say what’s in your heart.”

“Free speech does not end at the steps of a cathedral or a synagogue, or any other house of worship,” the president said. “We are giving our churches their voices back, and we are giving them back in the highest form. The federal government will never, ever penalize any person for their protected religious beliefs.”

The executive order pledges to “vigorously enforce Federal law’s robust protections for religious freedom.” It also promises to “address” regulations that prohibit employers from denying coverage of contraceptives to employees on religious grounds.

At least one Jewish group, the Orthodox Union, applauded the order. The O.U. opposed the Obama administration’s requirement that religious organizations provide coverage of contraceptives for employees, and also came out against Obama’s support for same-sex marriage.

It welcomed as a change of course an order that also directs federal agencies to make it easier for employers with religious objections not to include contraception coverage in workers’ health care plans.

“We are grateful that President Trump has made it clear that his administration will promote and protect the religious liberty of Americans of all faiths wherever possible,” Nathan Diament, the O.U.’s executive director of public policy, said in a statement Thursday. “We look forward to working with the White House, Justice Department and others to implement the principles laid out in today’s executive order.”

“The Founders envisioned a Nation in which religious voices and views were integral to a vibrant public square, and in which religious people and institutions were free to practice their faith without fear of discrimination or retaliation by the Federal Government,” the order reads. “For that reason, the United States Constitution enshrines and protects the fundamental right to religious liberty as Americans’ first freedom.”

Americans’ support for the order’s central action appears to be low. According to a March poll by the Public Religion Research Institute, only 22 percent support clergy making endorsements from the pulpit. And the Pew Research Center found that such endorsements are relatively rare. A 2016 Pew study found that while nearly two-thirds of worshippers have heard clergy deliver a sermon about a social or political issue, only 14 percent have heard clergy endorse or oppose a candidate.

Rather than loosening the reins on churches, opponents of the order say defanging the Johnson Amendment could put houses of worship in a bind. On Thursday, testifying on the law before a House subcommittee, Reform Rabbi David Saperstein said congregants could now pressure clergy into endorsing candidates, creating potential for divisiveness in congregations.

“What is a pastor to do if a congregant who is a major donor now makes his church gift contingent on an endorsement from the pulpit for his or her preferred candidate?” asked Saperstein, a former U.S. ambassador-at-large for religious freedom, as well as the Union for Reform Judaism’s adviser for policy and strategy. “What if a congregant asks a pastor for an endorsement when the pastor has endorsed other candidates in other elections?

“Once down that path,” he said, “painful pressure to endorse any congregant running for office arises.”