Pope and delegation of Hasidic Jews meet, dance at Vatican 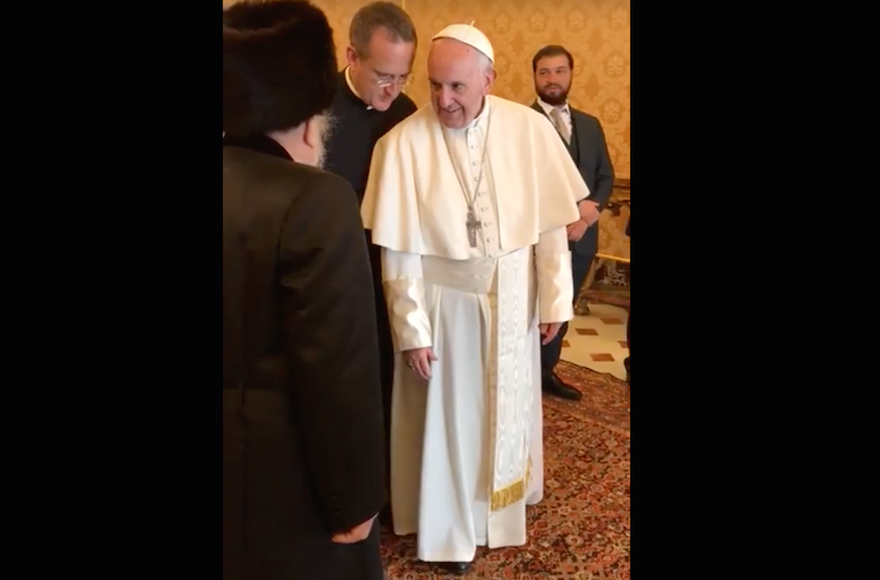 ROME (JTA) – Pope Francis danced with a delegation of Hasidic Jews and discussed with them issues including the protection of Jewish cemeteries in Europe and combating child sex abuse.

The pontiff held a 45-minute audience at the Vatican on Monday with the group, which was led by Rabbi Edgar Gluck.

A video on the Yeshiva World News website and also posted to YouTube shows the pope swaying to the music as members of the delegation dance and serenade him with the song “Long years shall satiate him.”

Yeshiva World News quoted Gluck’s son Zvi, who was part of the delegation, as saying the pontiff pledged to work toward enacting “stronger rules against destroying Jewish cemeteries to build roads or homes.”

Zvi Gluck, the founder and director of Amudim, an organization dedicated to helping Jewish victims of abuse and addiction, also tweeted that the pontiff had pledged “zero tolerance” for the sexual abuse of children and said “We need to keep kids safe.”

Born in Germany, Edgar Gluck, 80, divides his time between Brooklyn and Poland, where he holds the title of chief rabbi of Galicia. In the United States, where he has long been politically active, he was a co-founder of Hatzolah, one of the largest volunteer ambulance corps.

He has been involved in the preservation of Jewish cemeteries in Eastern Europe for decades and long served as a member of the U.S. Commission for the Preservation of America’s Heritage Abroad.

Gluck and Pope Francis met and discussed the plight of Jewish cemeteries last year when the pontiff visited Krakow for Catholic World Youth Day and, according to Yeshiva World News, the pope invited Gluck to continue the discussion at the Vatican.