JERUSALEM (JTA) – David Rubinger’s iconic photograph of three paratroopers at the Western Wall is the defining image of the 1967 Six-Day War.

The men in the photo — Dr. Yitzhak Yifat, Tzion Karasenti and Chaim Oshri — have proudly served as symbols of the historic Israeli victory for the past five decades. But in an interview with JTA, they said the war for them was just as much about loss.

“To liberate the Kotel was something amazing,” Yifat told JTA, referring to the Western Wall. “But we never celebrated. What was there to celebrate? We had lost many of our friends.”

Between June 5 and 15, in honor of the Six-Day War’s 50th anniversary, the three former paratroopers, now in their 70s, will re-create Rubinger’s photo in their first-ever tour of the United States. the tour, sponsored by Friends of the IDF, will stop at Jewish communities and other locations in the Cleveland, Detroit, San Francisco, Chicago, Atlanta, Boston and Baltimore areas. They will also recount some of the sacrifices that were made in the battle for Jerusalem.

This week all three spoke to JTA at Tel Aviv University in a spirited four-way conversation arranged by Friends of the IDF.

On June 5, 1967, the 55th Paratroopers Brigade was deployed to Jerusalem by bus. The official mission was to protect supply convoys headed to Mount Scopus, the only enclave in eastern Jerusalem that Israel had managed to hold on to in the 1948 War of Independence. But there was talk in the High Command and among soldiers about taking the Old City in Jordanian-controlled eastern Jerusalem.

As they approached the divided city, Yifat recalled being surprised by how loud were the sounds of Jordanian shells hitting Jewish neighborhoods. He, Karasenti and Oshri were reservists in their early 20s and had never seen serious combat. Soon after they arrived, Jews came into the streets to greet them, offering coffee and sandwiches and welcoming them into their homes. Some of the paratroopers accepted offers to make phone calls to wives, girlfriends and parents back home.

“It was amazing to see how everyone embraced us,” Karasenti told JTA. “All the sectors of Israeli society came together, it didn’t matter if you were Ashkenazi, Sephardi, religious, haredi, a kibbutznik, whatever.”

Following some hurried planning, the paratroopers crossed into no-man’s land after midnight. Dozens were wounded by Jordanian fire before they even entered eastern Jerusalem. Through the night and the next day, the paratroopers fought their way toward Mount Scopus, the only Jewish enclave in eastern Jerusalem, and to the outskirts of the Old City. 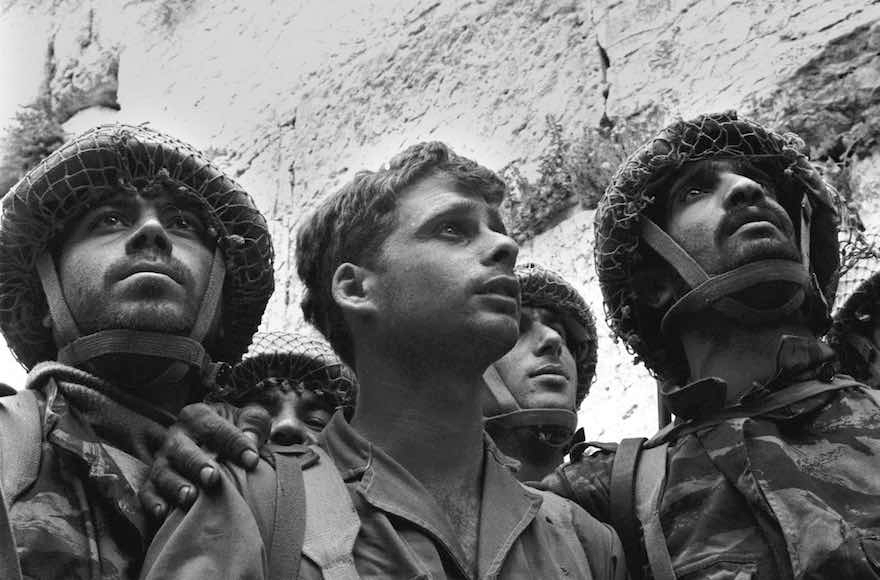 The 66th division — to which Karasenti, Yifat and Oshri were assigned – faced the hardest fighting, hand-to-hand combat against elite Jordanian troops in the trenches at Ammunition Hill, which overlooked the road to Mount Scopus. Yifat narrowly avoided being impaled by a Jordanian bayonet – and still has a scar on his face to show for it.

“It was like a hell. The trenches were filled with bodies, and you couldn’t tell if they were friends or enemies,” Yifat said. “At one point, I jumped on an Arab and shot him dead. As I was reloading my magazine, another Arab attacked me with a bayonet, and got me right here. I kicked him between the legs and shot him dead, too.”

Nearly 100 of the paratroopers were killed and 400 wounded before they paused for the night.

The next morning, June 7, the paratroopers found that most of the Jordanian troops had retreated from Jerusalem. Israel’s Cabinet, long divided about whether to capture the Old City, finally gave the go-ahead. Motta Gur, the paratroopers’ famed commander, delivered the news over the radio, saying: “Fifty-fifth paratroopers brigade, we are sitting on the ride overlooking the Old City, and we shall soon enter it — the Old City of Jerusalem, which generations have dreamed of and longed for. We will be the first to enter.”

The paratroopers rushed forward amid sniper fire from remaining Jordanian soldiers and rammed their way through the Lions’ Gate of the Old City. From there they made their way through narrow stone alleys and up to the Temple Mount and the Western Wall.

“The Temple Mount is in our hands,” Gur reported. 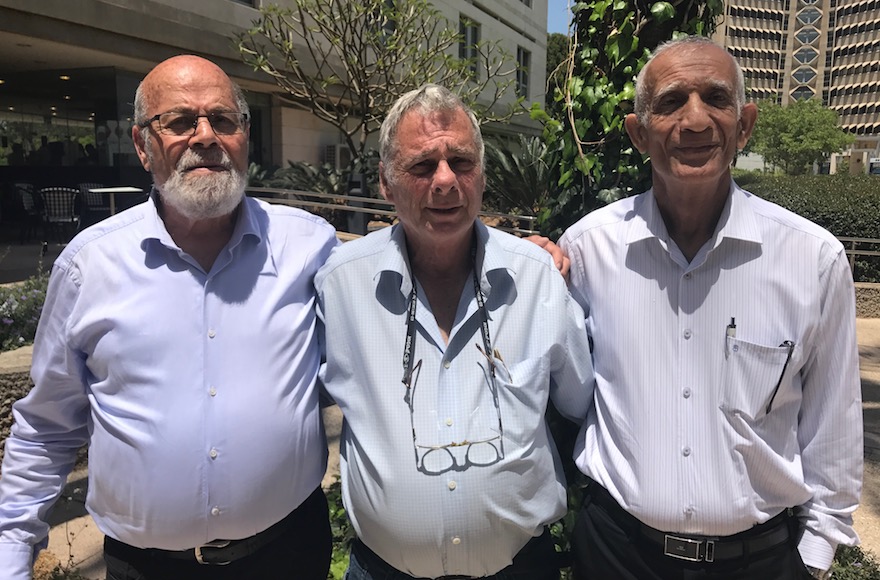 Religious and secular paratroopers alike were awed by their return to the heart of the ancient Jewish homeland.

“I didn’t realize where I was until I saw the Israeli flag flying above the stones, said Karasenti, an observant Jew. “I started to cry. Everyone was emotional. The whole nation of Israel was in ecstasy, euphoria. You can’t even imagine what it was like.”

While Yifat, Karasenti and Chaim Oshri were walking along the wall, Rubinger, who died in March at 92, lay on the ground and snapped the photo that would make them — and him — famous. Within days, the image had appeared in newspapers around the world.

After the war, Oshri became a chemist whose research was key in dairy production. In 1996 he worked for the minister of religious affairs. Karasenti, a director and choreographer, went on to a found a dance troupe and performed all over Israel. Itzhak earned his medical degree from the Technion in Haifa in 1974 and specialized in gynecology.

Soon after the war — which saw Israel capture the West Bank, the Gaza Strip, the Golan Heights and the Sinai — the survivors of the 66th division returned to Ammunition Hill, where they stacked stones into a memorial for the paratroopers who died there. Atop of the pile, they placed a helmet. On the other side of the hill, they erected a smaller memorial for the Jordanian soldiers.

“We thought they fought very bravely, and many of them died,” Yifat said. “Somebody has since removed that memorial. I’m very angry about it.”

While Yifat has publicly expressed some ambivalence about Israel’s rule over Palestinians who live in the territories it took in 1967, he said he had no doubt that Israel must retain all of Jerusalem.

“We fought and lost so many friends to unite Jerusalem for the Jewish world,” he said. “There’s no going backwards.”