Anthony Weiner’s sext partner warned him about scandal to come 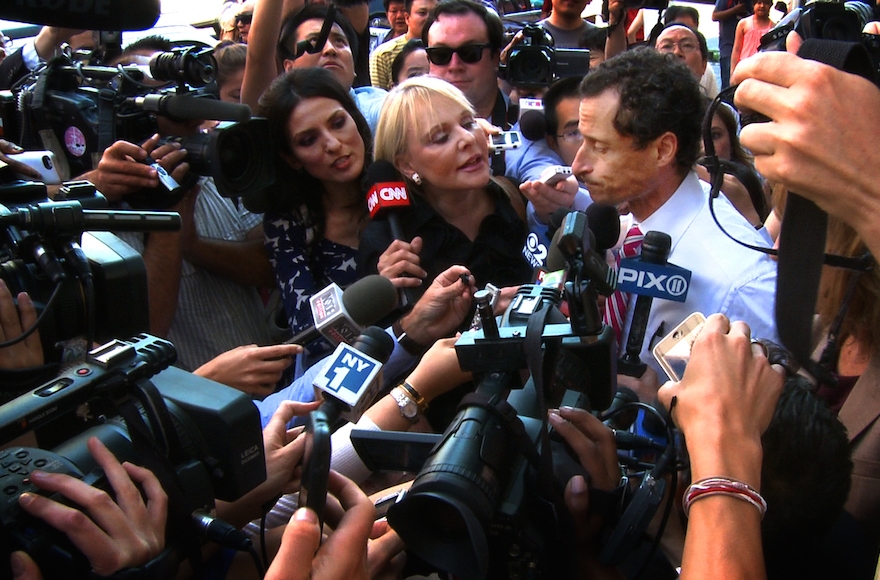 Weiner's campaign was designed to be redemptive — and instead it was plagued by another sexting scandal. (Courtesy of Sundance Selects)
Advertisement

(JTA) — There are those who blame Anthony Weiner, the disgraced former congressman and repeated sexter, for Hillary Clinton’s election loss and all that has come afterward — including President Trump’s abrupt firing of FBI Director James Comey.

After all, Weiner’s misdeeds and the inquiries they sparked led to the reopening of the Clinton email investigation days before the election, which Clinton blames for her loss. Comey’s conduct in the email affair is one of the various, if dubious, reasons Trump has given for firing him on Tuesday night.

But an article in the New Yorker suggests Weiner might have been able to avoid the whole thing, had he listened to a former sext partner.

The now-famous chain of events goes like this: Weiner allegedly sent sexually charged messages and photos to a 15-year-old girl. The girl told her story to the Daily Mail, a British tabloid, in September 2016. The FBI subsequently began investigating Weiner on child pornography charges. While examining his laptop, they found emails from Clinton, forwarded to Weiner by his wife, Clinton aide Huma Abedin. On October 28, Comey announced the reopening of an investigation into Clinton based on those emails. Trump won the election on Nov. 8. Trump then fired Comey on May 9, days after he gave inaccurate testimony about his choices in the email investigation.

Now, it turns out, Sydney Leathers, one of Weiner’s former sexting partners from 2013, warned him to cut off contact with the 15-year-old. Leathers also connected the girl with the Daily Mail, leading to the article that set off the cascade.

The new details come from the epic 9,000-word New Yorker narrative, published Thursday, on how Comey handled the Clinton emails. The article, by ProPublica reporter Peter Elkind, says that the 15-year-old girl contacted Leathers in May 2016 and sent her screenshots of the sexts. After urging the girl to go to the police, Leathers suggested she sell her story to the Daily Mail. The article says the girl’s father negotiated the payment, and Leathers got a cut.

But on July 30, a couple months before the article appeared, Leathers sent Weiner a cautionary Facebook message, which the article reprinted:

This is super awkward but you need to know something. There’s a 15-year-old girl named [redacted] messaging me and she’s claiming you guys sext and skyped. And that you know how old she is. For once I’m keeping my mouth shut. I want nothing to do with this. Frankly, I hope it isn’t true. But she showed me a screenshot that looks legit to me. How have you not learned your lesson? This is another level of f**ked up. I suggested to her not to talk to the press so you’re welcome but you may want to refrain from messaging anyone under 18 for gods sake. If she is really someone you’ve been talking to, you better cut that off quickly. She’s talking about potentially messing with Hillary’s campaign. I am kind of pissed to be put in this situation to be honest.

The New Yorker story doesn’t relate whether or when Weiner responded. The Daily Mail story came out Sept. 21, and the rest is history.

Leathers denies the story, and told the Daily Caller, a conservative news site, that Elkind misquoted her. She shot back at Elkind in a series of tweets, calling him a “liar” and “the least ethical journalist I’ve ever encountered.” But she never denied the Facebook message.

Everyone beware of @peterelkind, the least ethical journalist I've ever encountered. Don't trust him not to run info given off the record

The chain of events, of course, is full of unknowns: Maybe Leathers is telling the truth. Maybe Trump would have won regardless of Comey’s October surprise. Maybe, as many Democrats allege and Trump himself has suggested, the firing had more to do with the FBI investigation into Russian collusion. And maybe we wouldn’t be having this discussion if Clinton took better care of her emails.

But we do know Weiner’s sexts played a crucial role. And now, he can’t say he wasn’t warned.