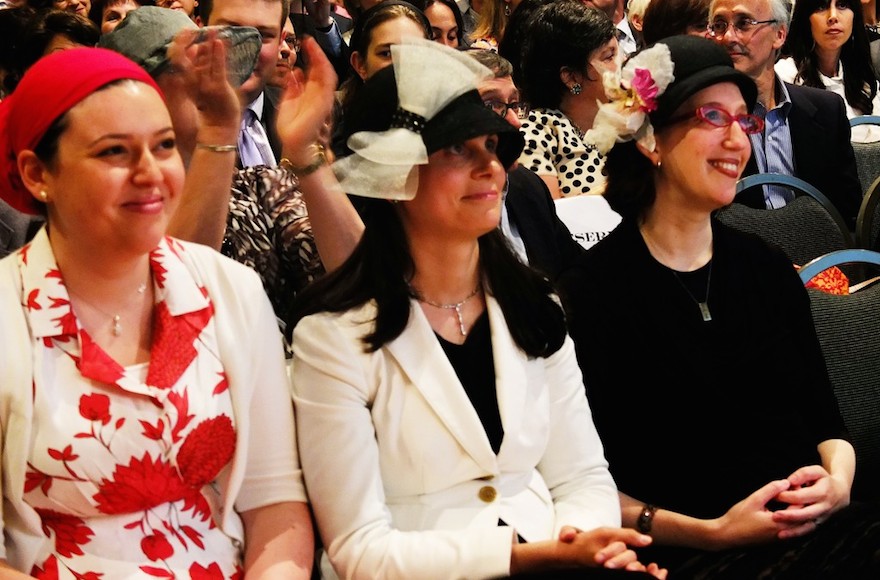 The O.U. is asking Maharat Ruth Friedman, left, shown at her graduation from Yeshivat Maharat in 2013, to change her title in order to comply with a rabbinic ruling that bars women clergy. (Joe Winkler)
Advertisement

NEW YORK (JTA) — Following its rabbinic ruling prohibiting synagogues from hiring female clergy, the Orthodox Union is pressuring synagogues that have hired the women to change their titles.

In February, the Orthodox Union, an umbrella Orthodox Jewish group, issued a Jewish legal ruling by seven rabbis that bars women from serving as clergy or in a position of spiritual authority. Four O.U. synagogues currently have women serving in formal clergy functions.

Now the O.U. is sending a three-member delegation to meet with the four synagogues to discuss compliance with the ruling — including requesting that at least two of the women clergy change their titles.

The delegation has met with Ohev Shalom in Washington, D.C., which employs Ruth Friedman, who uses the title maharat; Beth Sholom in Potomac, Maryland, where Hadas Fruchter also is a maharat, and Bnai David-Judea in Los Angeles, where Alissa Thomas-Newborn uses the title rabbanit. They have yet to meet with the Hebrew Institute of Riverdale, which employs Ramie Smith, whose title is rabba.

All four are graduates of Yeshivat Maharat, a liberal Orthodox seminary here that ordains women as clergy. The maharat title, which was coined by the seminary’s founder, Rabbi Avi Weiss, is a Hebrew acronym for “Jewish legal, spiritual and Torah leader.” In practice, graduates take a range of titles, including rabba and rabbanit.

In the meeting Wednesday with Ohev Shalom, the delegation spoke with Friedman about her responsibilities at the synagogue and asked her to change her title. Friedman said that she, along with the synagogue’s spiritual leader, Rabbi Shmuel Herzfeld, will not agree to that.

The delegation met with Thomas-Newborn and Rabbi Yosef Kanefsky at Bnai David-Judea earlier this month. While Kanefsky would not discuss the meeting’s specifics, he confirmed that Thomas-Newborn’s title and job description were the primary issue. Fruchter confirmed that her meeting occurred but was unable to discuss its specifics.

Friedman said the delegation did not raise any other issues with her professional responsibilities aside from her title. The O.U.’s ruling, likewise, outlines a range of functions women can serve at synagogues, but objects to their taking on positions of authority akin to rabbis.

“They’re not comfortable with the title,” Friedman told JTA on Friday. “It’s a pretty transparent way of saying ‘we don’t have a problem with the work you do. We’re not comfortable recognizing that you have a title that connotes a certain respect and education and professionalism.'”

The members of the O.U.’s delegation, none of whom are rabbis, are Executive Vice President Allen Fagin, President Mark Bane and Martin Nachimson, who finished his term as president earlier this year. Per O.U. policy, none of the three are commenting on the meetings. An O.U. spokeswoman said she could not comment on the matter.

From the O.U.’s standpoint, the meetings have been preliminary, fact-finding sessions. There has been no decision rendered on what steps the group might take should it feel the synagogues are not complying with the ruling. But Herzfeld of Ohev Shalom told JTA that the delegation did not exclude the possibility of expulsion from the O.U. over the issue.

“It felt like a threat because they sent three men to our congregation and interrogated us about our practices,” he told JTA. “And they said everything is on the table, and they said we’re not in compliance. I took that as a threat, that there’s a possibility of expulsion from the O.U. They did not deny that.”

Both Friedman and Kanefsky said they would not compromise on the title.

Kanefsky said the best outcome would be to “agree to disagree.”

“I’m an optimistic person, but at the same time I could not describe to you what that compromise would look like,” he told JTA on Friday. “We are not going to make any changes to Rabbanit Alissa’s title or job description.”

When he founded Yeshivat Maharat in 2009, Weiss created the title in order to avoid the issue of ordaining women as rabbis. But that has not happened. The Rabbinical Council of America, an Orthodox group, banned synagogues from hiring women clergy in 2015 and the O.U. followed suit this year.

“I’m sad for Orthodoxy that there’s so much attention devoted to what women can’t do,” she said. “Maybe we can think of a more constructive identity for our movement than ‘women don’t do stuff in Orthodoxy.’ It’s destructive in many ways.”