Jared Kushner: What you need to know about the scandal engulfing Donald Trump’s son-in-law 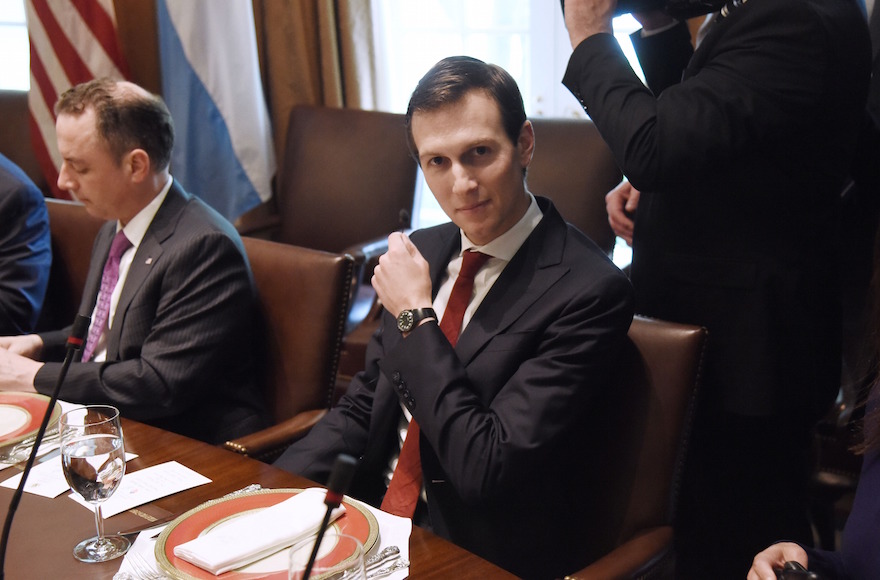 Jared Kushner at a luncheon with President Mauricio Macri of Argentina in the Cabinet Room of the White House, April 27, 2017. (Olivier Douliery/Pool/Getty Images)
Advertisement

(JTA) — Jared Kushner was once hailed as the key to Donald Trump’s surprise election victory.

Now Trump’s son-in-law and senior adviser is at the center of the biggest controversy plaguing the administration: its ties to Russia.

Kushner is facing heat following reports of two meetings with figures close to Russian President Vladimir Putin. Democrats say his White House role should be diminished. Republicans, most crucially his father-in-law, are backing him up.

Confronting scandal — and overcoming it — is nothing new for the real-estate scion turned presidential aide.

Kushner is an observant Jew and, like JTA, he’ll likely be offline for Shavuot on Wednesday and Thursday. By the time the Jewish holiday ends, new reports may render this story outdated.

But at least for now, here’s what you need to know about Jared Kushner.

He is being investigated for his meetings with Russian officials.

Kushner is now at the center of the investigation into whether Trump officials colluded with Russia to sway the outcome of the presidential election. At issue are two meetings he had in December, during the Trump administration’s transition period: one with Sergey Kislyak, Russia’s ambassador to the United States, and the other with Sergey Gorkov, who runs a Russian state-owned bank and is close to Putin. The meetings were first reported in March.

Last week, the Washington Post reported that the meeting with Kislyak focused on setting up a back channel between the Trump transition team and Moscow. As opposed to official communications with other countries, a back channel aims to avoid oversight by the U.S. government. Kushner reportedly proposed using Russian communications facilities for the back channel, but it was never established.

It’s not entirely clear why Kushner met with Gorkov. The New York Times suggests it could be part of Kushner’s attempt to create a direct line between the transition team and Putin. A Reuters report said the meeting could have concerned lifting U.S. sanctions against Russia. The bank said in a March statement that Gorkov met with Kushner in his capacity as a businessman.

That may be true, former FBI agent Frank Montoya Jr. told PBS, “but that’s usually when you are the government in power.”

If it is true that Kushner suggested they use the Russians’ own secure communications system to conduct their discussions, “this is something that just is beyond the pale for professionals,” added John Sipher, who served in the CIA in Russia and Eastern Europe.

He may not have broken the law, but Kushner’s meetings spell trouble for the White House.

As with many pieces of the Trump-Russia affair, there is a fine line here between “illegal” and “sketchy.” No one at this point is alleging that Kushner broke the law. But with suspicions swirling around Trump’s ties to Russia, it doesn’t help the president that his closest adviser and son-in-law is a focus of the investigation.

Kushner has been given a wide range of responsibilities in the Trump White House, from restructuring the federal government to achieving Middle East peace. He was one of the architects of Trump’s recent foreign trip, which especially in its visits to Saudi Arabia and Israel went smoothly and mostly gaffe-free.

Critics of Trump who may be experiencing Schadenfreude as a result of his son-in-law’s tribulations are also worried that it could hobble Kushner, who along with his wife, Ivanka Trump, are portrayed as moderating influences on the president. In the White House, Kushner reportedly has promoted fighting climate change and supporting LGBT rights. Kushner has also been called a restraining influence on Trump’s inflammatory tweets and statements.

Kushner has experience in weathering scandal.

If Kushner comes out of this maelstrom unscathed, it won’t be his first time getting past personal drama in the public eye.

When Kushner was a 24-year-old law student, his father was sent to prison for filing false tax returns, making illegal campaign donations and retaliating against a witness. Kushner took over the family real-estate business, purchased the Observer, a New York real-estate and culture newspaper, and bought 666 Fifth Ave. for $1.8 billion in the most expensive purchase ever of a New York City office building. All the while he visited his father in an Alabama prison every week.

And when Kushner fell into debt from the Fifth Avenue buy, he pulled a Trumpian move, aggressively renegotiating his obligations until he salvaged the investment.

“It is very helpful to him that he’s constantly underestimated,” Ken Kurson, a former Observer editor and friend of Kushner’s, told New York magazine. Real-estate attorney Jonathan Mechanic told New York that during the debt negotiations, the Kushners “lived through turbulent times, and not only did they live, they thrived.”

Kushner has also gained a reputation for seeking payback. He allegedly pushed the Observer’s staff to report negative articles about his business rivals, though none was ever published. He also reportedly shut out New Jersey Gov. Chris Christie, an early Trump supporter, from the administration. A decade earlier, Christie was the U.S. attorney who sent Kushner’s father to prison.

In the wake of last week’s news, the Democratic National Committee is calling for Kushner’s security clearance to be revoked until the Russia investigation concludes. While California Rep. Adam Schiff, the ranking Democrat on the House Intelligence Committee, didn’t call for suspending the security clearance, he said it should be reviewed.

“You have to ask, well, who are they hiding the conversations from?” Schiff told ABC’s “This Week,” regarding the back-channel reports.”If these allegations are true and he had discussions with the Russians about establishing a back channel and didn’t reveal that, that’s a real problem in terms of whether he should maintain that kind of a security clearance.”

Republicans, however, are defending Kushner. South Carolina Sen. Lindsey Graham said on CNN that the back-channel report “makes no sense” because such a clandestine channel would almost certainly be surveilled by U.S. intelligence. Tennessee Sen. Bob Corker, chairman of the Senate Foreign Relations Committee, called for reserving judgment until Kushner testifies before Congress.

Regardless of those attacking and defending him, it appears Kushner still has the support of his boss.

“Jared is doing a great job for the country,” Trump said in a statement to The New York Times on Sunday evening. “I have total confidence in him. He is respected by virtually everyone and is working on programs that will save our country billions of dollars. In addition to that, and perhaps more importantly, he is a very good person.”