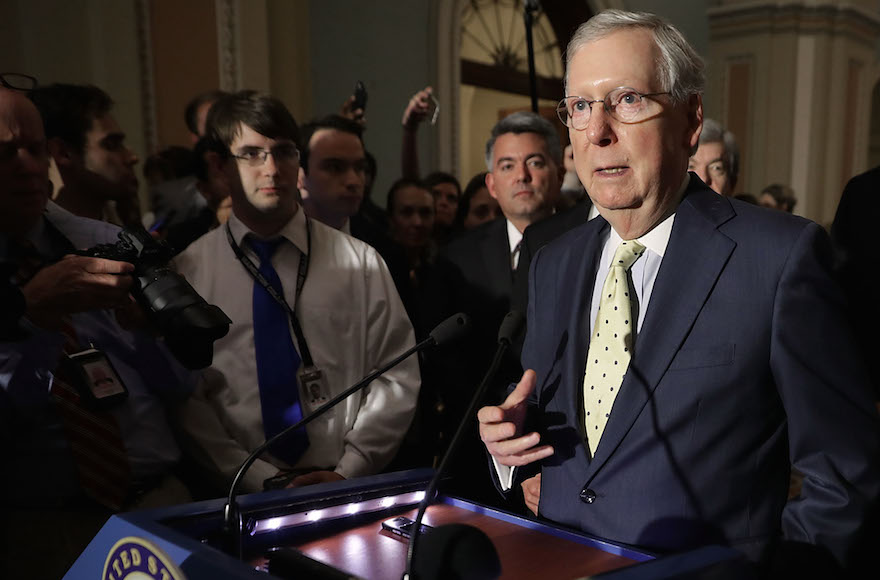 (JTA) — The Reform movement sharply criticized a Republican bill in the Senate that would repeal and replace major parts of the Affordable Care Act and make severe cuts to Medicaid.

On Thursday, Senate Republicans revealed a draft of a measure that would get rid of the legal requirement that most Americans have health coverage and offer federal tax credits to aid Americans in paying for health insurance.

“The Senate bill revealed this morning is a major undermining of American health care that will hurt Americans most in need: the elderly, the poor, children and people with disabilities,” Barbara Weinstein, director of the Commission on Social Action of Reform Judaism, said in a statement on behalf of the Reform movement. “Jewish tradition’s emphasis on caring for the sick and lifting up those in need inspires us to call on Senators to reject the Better Care Reconciliation Act of 2017.”

Weinstein alluded to the Jewish prayer for healing in her statement.

“In the Jewish ‘Mi Sheberach’ prayer for the ill, we ask for the Holy One to be filled with compassion for the sick and to swiftly provide a complete renewal of body and spirit. As we pray for all those in need of healing, let us also act with compassion and wisdom,” she said. “We call on Senators to reject this deeply harmful legislation and work instead to expand access to affordable health care for all.”

“We must call the Senate’s ACA repeal bill exactly what it is: a moral travesty — a tax cut for the rich financed on the backs of the most vulnerable members of our society,”  the group’s CEO, Stosh Cotler, said in a statement. “This legislation will result in millions of Americans losing their health care.”

In May, the House of Representatives passed a similar bill backed by Republicans and President Donald Trump. Jewish groups, including the Reform movement, the Jewish Federations of North America, B’nai B’rith International, the National Jewish Democratic Council, the National Council of Jewish Women and Jewish Women International denounced that measure, while the Republican Jewish Coalition praised it.