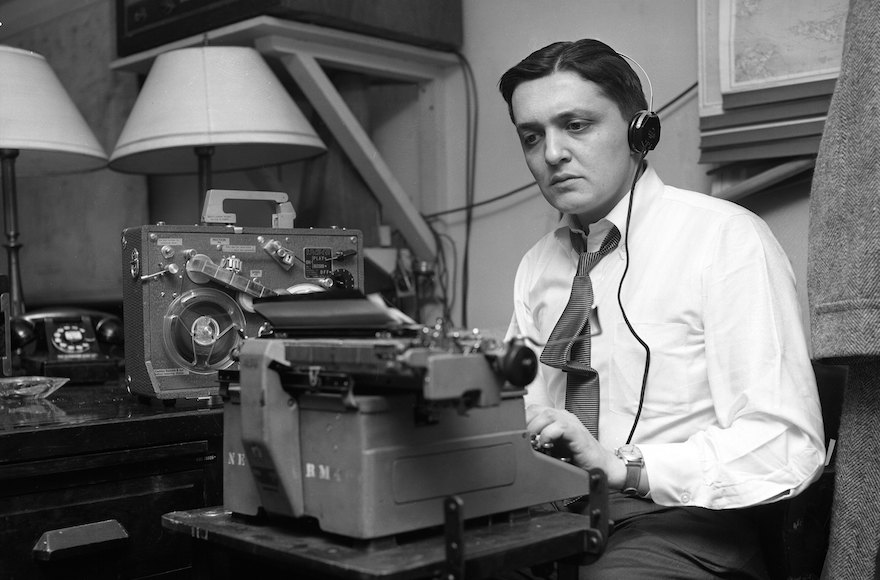 (JTA) — Gabe Pressman, a pioneering TV newsman who was a fixture in New York City journalism for six decades, has died at 93.

Pressman, who died Friday, was one of the first reporters to take a camera crew into the streets for live coverage.

Pressman became a reliable and engaging source for many New Yorkers who tuned into local stations like WNBC and WNEW.

He was honored with many accolades — 11 Emmy Awards, a Peabody and the George Polk Award — for his original reporting, uncovering topics like homelessness and the mentally ill. He also served as president of the New York Press Club from 1997 to 2000.

The Bronx native was the son of two Jewish immigrants who supported his deep interest in reporting. Pressman showed promise at a young age, having started a family newspaper at 8 or 9. He was known by family and friends for his love of all things news and public affairs.

Pressman received his bachelor’s degree from New York University and his master’s from Columbia University’s Graduate School of Journalism. He served in the Navy as a communications officer from 1943 to 1946. Following World War II, Pressman toured Europe on the Pulitzer Traveling Fellowship to report for Overseas News Agency, a subsidiary of the Jewish Telegraphic Agency, and The New York Times.

Beginning in 1956, Pressman was a daily reporter for WRCA-TV, the predecessor of WNBC, where he would serve for over half a century.

Peers and colleagues recognized Pressman for his ability to cover a wide range of issues, from subway accidents to election scandals, in a thorough yet tenacious manner. Pressman also interviewed a number of cultural and political icons throughout his career including Fidel Castro, Marilyn Monroe, Malcolm X, and politicians on the local and national level.

In October 1982, during an interview from Jerusalem for WNBC-TV’s “News Forum,” Pressman asked then-opposition Labor Party leader Shimon Peres if Israel was guilty of “immorality” in the massacre of hundreds of Palestinian civilians by Christian Phalangist forces in the Shatila and Sabra refugee camps of south Lebanon.

Peres replied: “I would never imagine in my darkest dreams that there would be a single Israeli that would ever give his hand to a massacre of innocent people. I don’t buy it.”

Pressman did not retire — until his last few days he was active at WNBC.

“He was truly one of a kind and represented the very best in television news reporting,” Eric Lerner, the New York station’s president and general manager, said of Pressman’s legacy and influence. “Gabe was still coming to work and thinking about the next story. He was a treasured colleague and friend to all of us and he will be missed.”

Pressman is survived by his wife, four children, eight grandchildren and one great-grandson.