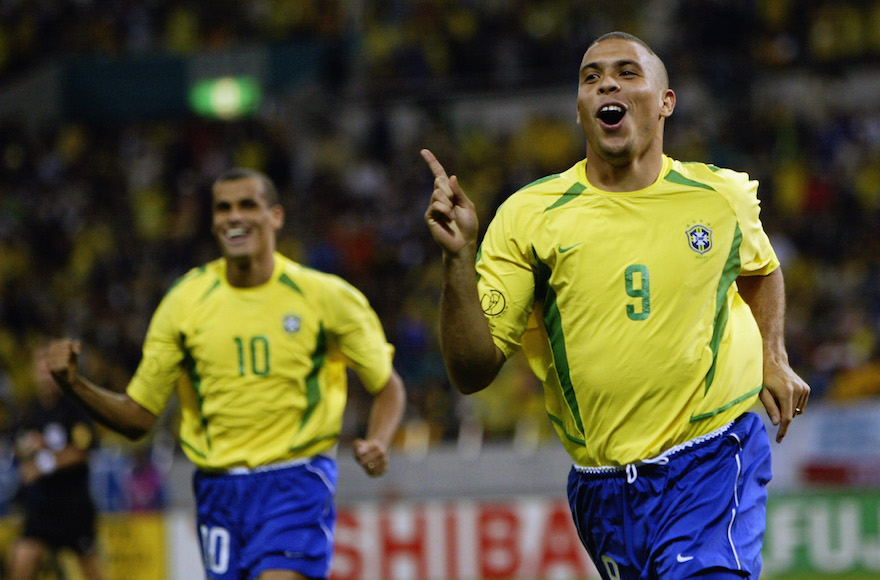 Brazil's Ronaldo, right, after scoring a goal in a 2002 World Cup game between Brazil and Turkey played at the Saitama Stadium, in Saitama-Ken, Japan, June 26, 2002. (Alex Livesey/Getty Images)
Advertisement

JERUSALEM (JTA) — The son of Brazil’s legendary soccer player Ronaldo will play for Brazil at the 20th Maccabiah Games in Jerusalem.

Ronaldo’s son Ronald, 17, is not Jewish. But he is a member of Brazil’s Under 18 soccer team participating in the games, the so-called Jewish Olympics. A record 10,000 athletes from 80 countries will be competing in 43 sports at the world’s third-largest sporting event, according to organizers.

“This is the Brazilian delegation that represents us at the World Maccabi Games. A special hug to my son @ronald_lima. Good luck, guys! Go for it, Brazil,” Ronaldo posted Wednesday on Instagram a day before the start of the games.

The post, accompanied by a photo of Ronald and the team, garnered over 40,000 likes in its first six hours.

Ronald has also been a member of Sao Paulo’s Hebraica, a type of club popular across South America that functions as a cross between a Jewish community center and a country club.

“Ronald and his mother Milena have been full members of Hebraica club for years, where they felt warmly welcomed and feel like home, as they say,” Avi Gelberg, who presides over both the Maccabi organization in Brazil and the Hebraica club in Sao Paulo, told JTA. “They have also been approaching Judaism more and more.

“We didn’t have a full team in this category, so we decided to reward the kid by inviting him.”

Milena, an ex-model who also is not Jewish, is a member of the Sao Paulo Hebraica women’s soccer team. She holds the women’s record for soccer ball juggling, or keeping a soccer ball off the ground, with over 55,000 touches.

Eligibility rules for Maccabiah competitors vary from country to country. Some delegations require athletes to be Jewish according to strict interpretation of religious law, while others have more liberal rules.

Some 30,000 people are expected to attend the Maccabiah opening ceremony on Thursday night at Jerusalem’s Teddy Stadium. Soccer is the largest sport at the games, with more than 1,400 athletes from 20 countries participating.

Ronaldo, 40 — not to be confused with Portugal’s current soccer star, Cristiano Ronaldo — is widely considered to be one of the greatest soccer players of all time. A three-time FIFA World Player of the Year, Ronaldo in his 1990s prime was known for his dribbling speed, creative ball moves and prolific goal-scoring ability. In 98 matches for Brazil’s national team, he scored 62 goals, the second most in Brazilian history behind another icon, Pelé.

In the Instagram photo below, Ronaldo’s son is in the back row on the far right, sporting a pair of headphones.