The first medic to respond to the Temple Mount terror attack was Muslim. Here’s his story. 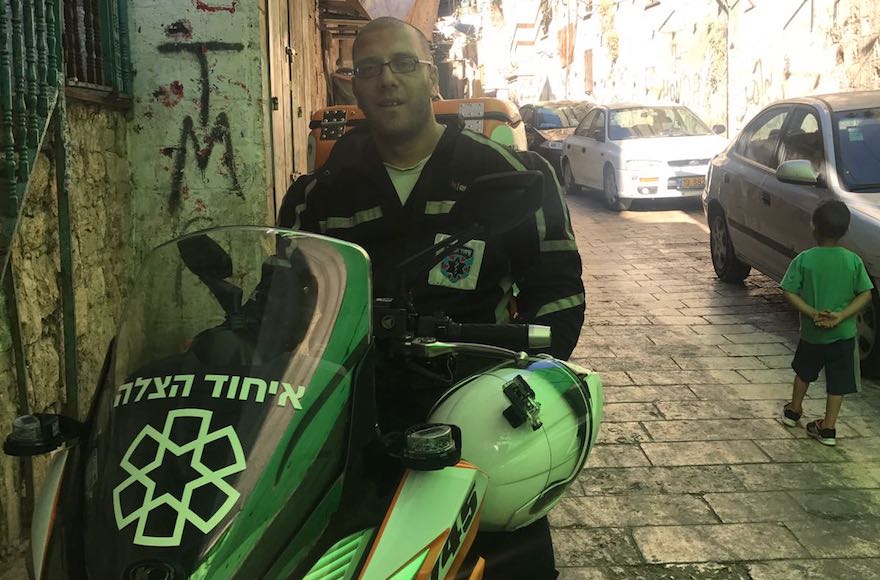 JERUSALEM (JTA) – When Nedal Sader first heard the crackle of automatic weapon fire Friday morning, he couldn’t believe it was coming from the Temple Mount.

As a Muslim, he regarded the complex just outside his apartment as a sacred and peaceful place. He prayed there nearly every week.

But as a seasoned first responder, he knew what gunshots sounded like echoing off the stones of the Old City. He finished  dressing, threw on his medic’s jacket and raced to the scene.

Sader, a 37-year-old nurse and father of five, was the first medical professional to arrive at the Temple Mount following the attack in which two Israeli Druze police officers were shot dead. The three Arab-Israeli gunmen were then killed by police on the scene.

Amid the carnage at the politically and religiously fraught complex, Sader said he simply tried to save whomever he could.

“It doesn’t matter who the person is,”  said Sader, a Muslim volunteer with the United Hatzalah ambulance service. “Whoever needs help most gets help first.”

Sader joined the mostly haredi rescue service in 2012, soon after his father died of a heart attack while waiting for an ambulance. He said he hoped to improve emergency medical care in the Arab quarter of the Old City, which like other Arab neighborhoods in eastern Jerusalem has long suffered from lack of services. It is illegal for Jewish medics to enter Arab villages or neighborhoods without a police escort because of security concerns.

“I had to do something,” he said. “I didn’t want the same thing to happen to anyone else in my neighborhood or in Israel.”

United Hatzalah has about 300 Muslim, Druze and Christian volunteers EMTs, paramedics and doctors, who account for about 10 percent of the total, according to spokesman Raphael Poch. He said the organization began recruiting Muslims to serve their own neighborhoods about a decade ago.

“We formed the organization to respond in every community in Israel,” Poch said. “Because we’re community based, that means engaging Muslim volunteers.”

Sader said that in the past five years, he has responded to seven major Palestinian attacks in the Old City, often on a motor scooter provided by United Hatzalah. When responding to calls, Sader said, he leaves on his helmet and sometimes his sunglasses to avoid being identified as Arab. He also tries not to speak much.

After Friday’s attack, police officers on the Temple Mount saw Sader coming and urged him to treat their fallen comrades. But he had to wait for a moment until the attackers — later identified as a trio of cousins from northern Israel – were subdued.

The first casualty Sader came upon was one of the slain officers, whom he quickly determined was beyond help. Moving southward, he passed the bodies of two of the attackers and saw the third prone on the ground, surrounded by police. The officers directed him to the second fallen officer and, finding no pulse, he began CPR.

Soon thereafter, the subdued gunman leapt up and attacked the officers surrounding him with a knife — a moment that was caught on video. The resulting hail of police bullets, which killed the attacker, whizzed around Sader as he applied compressions with the help of another officer. Still, he continued for about 15 minutes, until an ambulance arrived. But the officer was never revived. 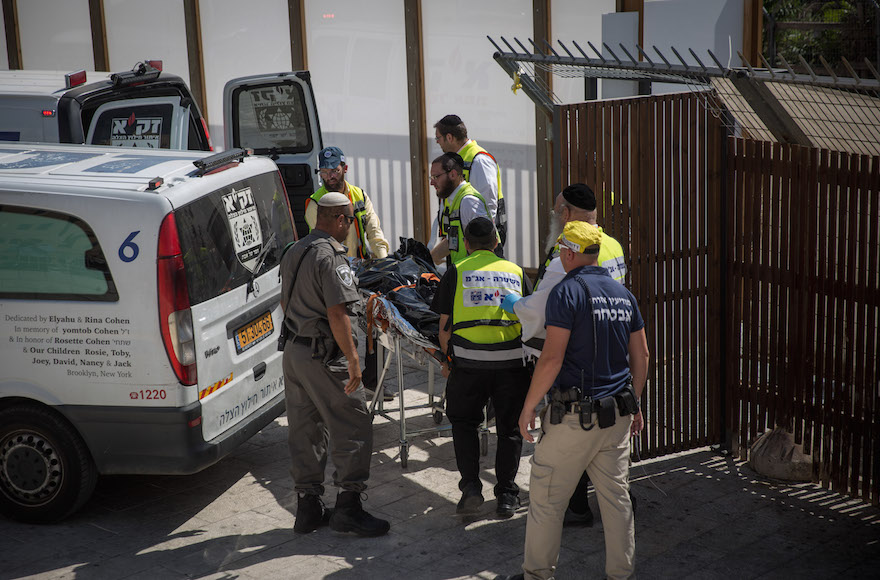 Israeli medical personnel removing the dead body of one of the terrorists involved in a shooting attack near the Temple Mount complex in Jerusalem’s Old City, July 14, 2017. (Hadas Parush/Flash90)

When it comes to the tensions on the Temple Mount, Sader said both Arabs and Jews are to blame. The former site of the ancient Jewish temple is the holiest in Judaism. Meanwhile, two Arab prayer sites, the Dome of the Rock and the Al-Aqsa mosque, make it among the most important places in Islam as well.

Since Israel captured the Temple Mount from Jordan in the 1967 Six-Day War, the site has become a flashpoint in the Israeli-Palestinian conflict. Some Jews, mostly from the Orthodox national religious community, never accepted Israel’s decision to keep the mount an exclusively Muslim prayer site after the war. Although Israel insists it has no plans to change the status quo, Palestinian suspicions to the contrary helped fuel the first and second intifadas, or uprisings, and the wave of stabbings and car-ramming attacks that started in October 2015.

Sader, who like most Palestinian residents of eastern Jerusalem has opted not to pursue Israeli citizenship, said violence is unacceptable in such a religious place. But as is common in the Arab world, he denied historic or religious claims by Jews to the mount and said he opposed allowing Jewish prayer and new security measures introduced since the attack.

He did seem to concede the Western Wall to the Jews.

“I respect the Kotel and other holy places, and I think people should respect our holy place,” he said, using the Hebrew term for the Western Wall.

On Friday night, Sader headed to his paid job. He worked a 24-hour shift in at the Terem medical clinic in the mostly haredi West Bank settlement of Beitar Illit. He said he respects religious Jews and their customs, and does not openly smoke or speak on his cellphone during his breaks on Shabbat, when Orthodox Jews eschew such activities.

Typically, Sader said, he can get some sleep on the Shabbat shift. But this time he found himself pacing the halls all night, even when there were no patients to care for.

“After a day like that, you can’t sleep,” he said. “But I’m OK now. We’re used to stuff like this. It wears off after a little while.”