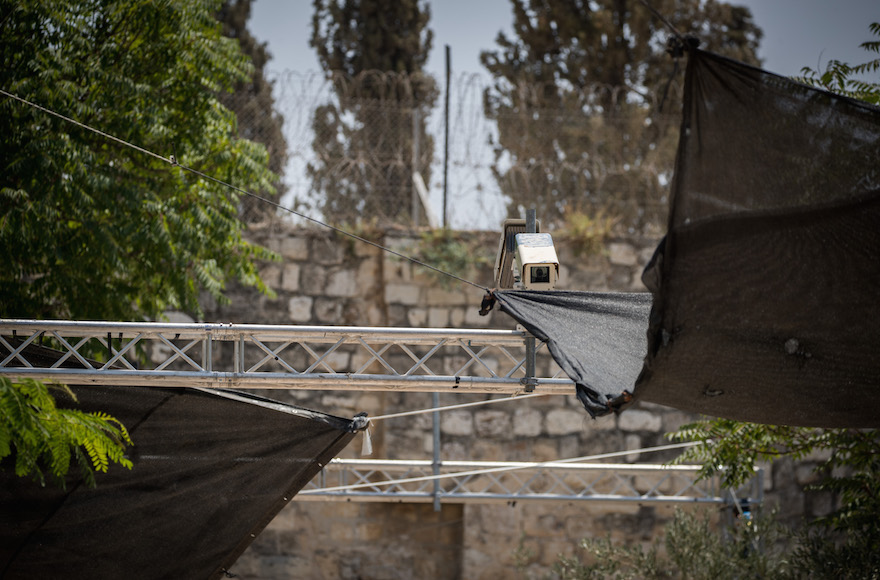 View of a new security camera that was placed near metal detectors at the entrance to the Temple Mount in the Lion's Gate, in Jerusalem's Old City, July 23, 2017. (Yonatan Sindel/Flash90)
Advertisement

JERUSALEM (JTA) — The Israel Police said the new security cameras they plan to install at the Temple Mount will retain “full respect for the public and its privacy.”

The police released the statement Tuesday after rumors gained traction that the police had plans to install X-ray cameras at the entrances for Muslim worshippers at the Temple Mount.

Palestinian social media said that the cameras would be able to look at Muslim women’s bodies and could cause cancer.

“The Israel Police does not use any type of camera that harms privacy in any way and has no intention of using such cameras in the future,” the statement said. “The purpose of the cameras is to protect and guard public safety.”

This is done, the statement said, “while maintaining full respect for the public and its privacy, whether the people are worshippers or passersby, let alone women.”

Late Monday night, the Security Cabinet said it would remove the metal detectors and security cameras that were put in place less than two weeks ago and instead incorporate security measures based on advanced technologies, called “smart checks,” and other measures instead of metal detectors. Israel will pay up to 100 million shekels, about $30 million, over the next six months to install the new devices, which include sensitive security cameras.

A Waqf official told The Times of Israel that “the new high-tech cameras” would not be accepted in place of the metal detectors.

The new security measures had been put into place after three Arab-Israelis shot and killed two Israeli police officers at the holy site on July 14. Once the metal detectors were put in place, Muslims refused to enter the Temple Mount, instead praying outside of its gates, leading to clashes and the deaths of at least five Palestinians in recent days.

Despite the removal by Tuesday morning of the metal detectors, Muslim worshippers have continued to stay away and pray at the gates leading to the holy site.

Haaretz reported Tuesday that the cameras would rely on a database of photos of people who are deemed suspicious and would scan the faces of those entering the Temple Mount. The system is capable of scanning millions of faces for 12 distinct characteristics every few seconds, according to Haaretz.

Those in the database identified by the cameras can be taken aside for questioning or a body search.