With sanctions and warnings, Trump and Congress step up pressure on Iran 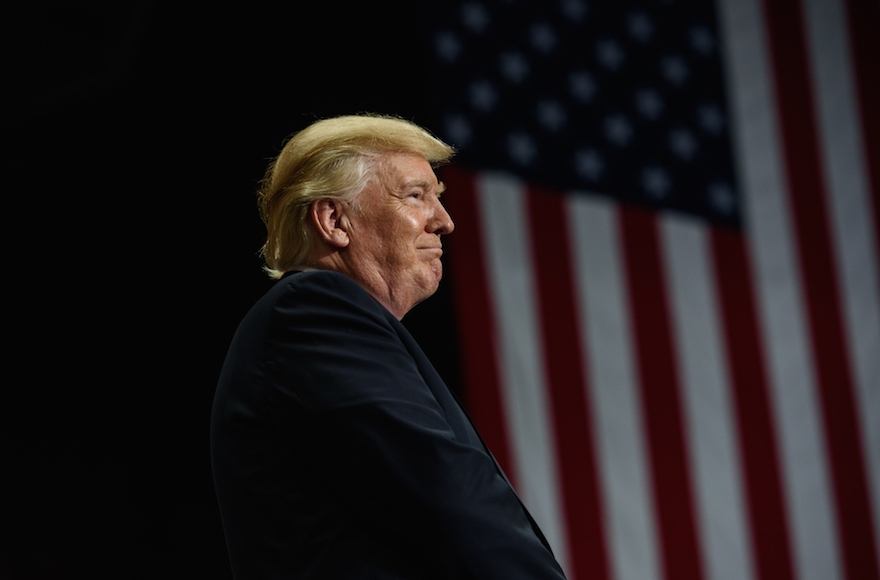 WASHINGTON (JTA) — President Donald Trump said he would be “surprised” if the United States adjudicates Iran in compliance with the nuclear deal in three months and the U.S. House of Representatives approved new sanctions targeting the Islamic Republic, signaling increasing fragility for the 2015 agreement.

“We’ll talk about the subject in 90 days, but I would be surprised if they were in compliance,” Trump told The Wall Street Journal on Tuesday.

The United States must declare Iran in compliance every 90 days. Trump, acting on the advice of his top security advisers, agreed to do so earlier this month, but with great reluctance.

Later the same day, Trump in Youngstown, Ohio, again expressed misgivings about the deal, which trades sanctions relief for Iran in exchange for a rollback in its nuclear program. The agreement was President Barack Obama’s signature foreign policy achievement.

“If that deal doesn’t conform to what it’s supposed to conform to, it’s going to be big, big problems for them,” Trump said. “That I can tell you. Believe me.”

Trump reportedly is coming around to embracing an argument that Iran is in violation of the “spirit” of the deal even if it is complying with its narrow particulars, mandating limited uranium enrichment. Iran has continued its ballistic missile testing and maintains an interventionist role in conflicts in the Middle East, including in Iraq and Syria.

Congress also is increasing pressure on Iran to roll back non-nuclear activities that the United States considers disruptive.

A bill that the House passed overwhelmingly on Tuesday ramps up sanctions on Iran for its missile testing, human rights abuses and backing of terrorism, and tightens the president’s ability to waive the sanctions. The measure, which also includes Russia and North Korea sanctions, has yet to come to the Senate floor for a vote.

“AIPAC urges the Senate to quickly pass the legislation and the president to sign it into law,” AIPAC said in a statement.

Defenders of the nuclear deal say it was designed purely to keep Iran from becoming a nuclear weapons power, allowing the United States and its allies to more comfortably confront it on issues like terrorism, military interventions and missile testing. Obama, like Trump, continued to sanction Iran in those areas.

Trump also targeted Hezbollah, the Lebanese militia that is an ally of Iran, in remarks Tuesday at a joint news conference with the prime minister of Lebanon, Saad Hariri.

“Hezbollah is a menace to the Lebanese state, the Lebanese people and the entire region,” the president said. “The group continues to increase its military arsenal, which threatens to start yet another conflict with Israel, constantly fighting them back.”

Trump, however, declined to say whether he would back new sanctions targeting Hezbollah under consideration in Congress.

“With the support of Iran, the organization is also fueling the humanitarian catastrophe in Syria,” he said.

Separately, the House on Wednesday unanimously approved a nonbinding resolution calling on Iran to release U.S. citizens and residents held in prison, including Robert Levinson, a Jewish former FBI agent who has been missing since 2007 when he was in Iran on what has been revealed as a rogue CIA operation.

The White House made a similar appeal earlier this week.