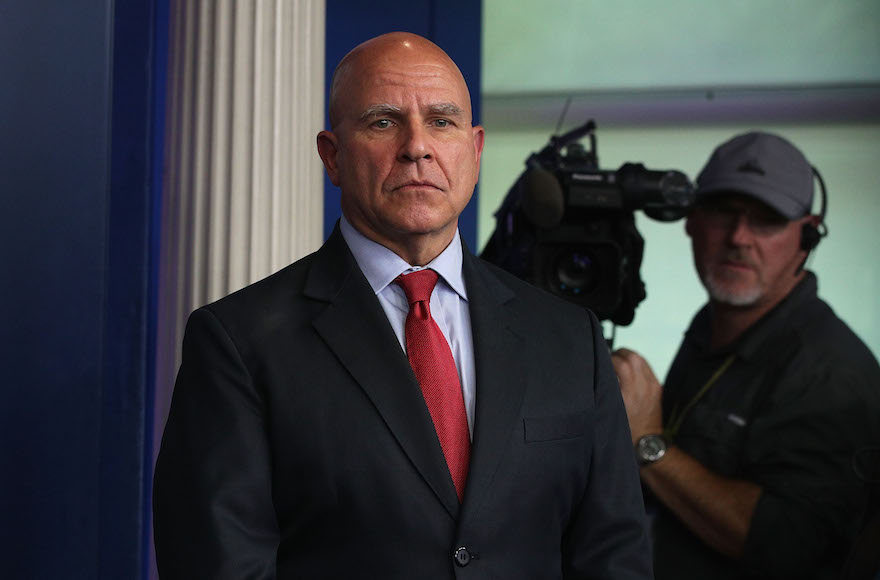 WASHINGTON (JTA) — In an unusual statement, President Donald Trump called his national security adviser, H.R. McMaster, “very pro-Israel,” an apparent bid to end a barrage of attacks from the far right that has depicted McMaster as hostile to Israel.

“General McMaster and I are working very well together,” Trump said in a message relayed to media outlets late Friday. “He is a good man and very pro-Israel. I am grateful for the work he continues to do serving our country.”

McMaster in recent days has removed from the National Security Council an array of advisers who have ties to the far right, including outlets like Breitbart, the news website helmed until last year by Trump’s top strategic adviser, Stephen Bannon, and Conservative Review. Those sites have run anonymously sourced stories depicting McMaster as anti-Israel.

There are a number of reasons for the differences that apparently have spurred the sackings: Many were hired by McMaster’s predecessor, Mike Flynn, and were still loyal to Flynn, who left when he became a central figure in the scandal engulfing the Trump administration concerning allegations of ties between the Trump campaign and Russia.

A number also hew to conspiracy theories that would unsettle, if not horrify, traditional conservatives like McMaster. One of those removed, Rich Higgins, had circulated a memo alleging a conspiracy of Maoists and Islamists within and without the government seeking to undermine the Trump agenda.

McMaster and other more establishment figures in the administration, including Defense Secretary James Mattis and Secretary of State Rex Tillerson, have also counseled caution when it comes to the Iran nuclear deal. Trump wants out of the agreement negotiated by his predecessor, Barack Obama, which trades sanctions relief for Iran’s rollback of its nuclear activities.

The trio of McMaster, Tillerson and Mattis talked a reluctant Trump into recertifying the deal last month, noting that Iran was abiding by the narrow terms of the agreement while amping up activities in other areas that the West finds troublesome, including missile testing and military adventurism. One argument against pulling out of the nuclear deal abruptly is that it would alienate U.S. allies who are otherwise disposed to confronting Iran in non-nuclear areas. Trump has said he likely won’t recertify Iran in three months when it next comes up.

Since then, and perhaps acting on reports that McMaster and Trump do not get along, right-wing media have run reports anonymously quoting current and former administration officials depicting McMaster as hostile to Israel. Conservative Review quoted officials as saying that McMaster had called Israel “illegitimate” and an “occupying power.”

Reports, including a lengthy Facebook post by Caroline Glick, a Jerusalem Post columnist, blamed McMaster for not allowing Israeli Prime Minister Benjamin Netanyahu to join the Trump family for a visit to Jerusalem’s Western Wall when Trump visited Israel in June.

Mike Cernovich, a far-right provocateur, set up a website called McMasterLeaks to solicit information that could damage McMaster. It at first featured a cartoon depicting McMaster and David Petraeus, a friend and colleague of McMaster’s from their time in the military, as puppets being manipulated by the billionaire financier George Soros, who in turn was manipulated by a rotting arm labeled “Rothschilds.”

Soros, a Jewish philanthropist whose giving to leftist causes has made him a bugbear of the right, has no known ties to McMaster. The Anti-Defamation League posted an analysis of the cartoon outlining its typical anti-Semitic tropes, including depicting Jews as puppeteers and the Rothschild family as all controlling.

Cernovich later relabeled the arm as “Saudis,” telling The Atlantic he didn’t want to deal with complaints that the cartoon was anti-Semitic.

The attacks on McMaster have spurred other pro-Israel hawks to come to the national security adviser’s defense. Mark Dubowitz, the director of the Foundation for the Defense of Democracies, posted on Twitter the results of his research showing McMaster as hawkish on Iran in statements dating back to 2007 when he was a general serving in the Iraq War.

“Today I pulled up everything I could find that McMaster has said on Iran dating back to 2007,” Dubowitz said, launching a thread of tweets with citations. “If he isn’t tough-minded, I don’t know who is.”

Today I pulled up everything I could find that McMaster has said on Iran dating back to 2007. If he isn't tough-minded, I don't know who is.

While arguing to keep the deal in place, McMaster has said he agrees with Trump that it is a bad deal, allowing Iran too much leeway for disruption in the region.

“What we have done is we have crafted a strategy along with a lot of our like-minded nations, allies, partners, to counter Iran’s destabilizing behavior,” McMaster said Saturday in an interview on MSNBC with Hugh Hewitt, a conservative radio show host. “While we still aim to prevent by whatever means is necessary to do so, Iran from obtaining a nuclear weapon.”