13 dead, over 50 injured in Barcelona van-ramming attack near kosher restaurant 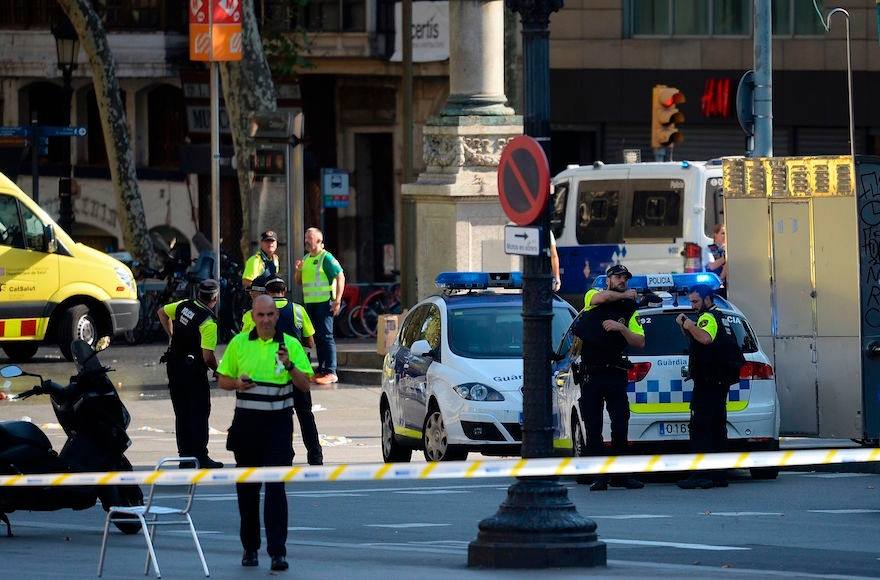 Medical staff members and policemen standing in a cordoned off area after a van ploughed into the crowd on the Rambla in Barcelona, August 17, 2017. (Josep Lago/AFP/Getty Images)
Advertisement

(JTA) — A van plowed through a crowd of people on Barcelona’s main shopping street, reportedly killing at least 13 people and injuring over 50 others.

Police said they were treating the Thursday incident as a terrorist attack, according to the French news agency AFP.

The Catalan government’s interior minister announced the death toll of the the attack on Rambla avenue near the entrance to Maccabi, a kosher restaurant, CNN reported. Spanish media, including the online edition of the El Mundo daily, reported that the bulk of injuries occurred outside the FNAC department store on the same street.

Barcelona’s chief rabbi, Rabbi Meir Bar-Hen, said it did not appear the attack targeted Jews, but security forces instructed him to temporarily close Jewish institutions in the city, according to Israel’s Channel 10. The Daily Mail reported that several people were injured outside the restaurant.

This photo from Barcelona appears to show the aftermath of today's incident; the kosher restaurant, Maccabi, is visible on the right. pic.twitter.com/yWlOZA8gTU

Reports stated that local police have arrested one man in connection with the attack. Some reports speculated that the man is Driss Oukabir, a Moroccan citizen who the Spanish-language paper El Pais identified as the person who rented the van.

The Barcelona attacker posted this antisemitic video alleging a global Jewish conspiracy to take over the world: https://t.co/QsM7nF9RjM pic.twitter.com/tlwiWiyXHw

Witnesses at the scene said the driver of the vehicle fled on foot and shots were fired. Shortly after the attack, two armed men entered the Turkish restaurant Luna de Estambul, according to The Associated Press. The men were holed up there as police surrounded the place, Mundo Hispanico reported.

In photos from the scene of the attack, men and women in summer clothing are seen lying on the ground, and in some cases being treated by civilians and medics.

As the car began hitting pedestrians, a stampede occurred on the street and in the FNAC store, injuring more people, according to El Mundo.