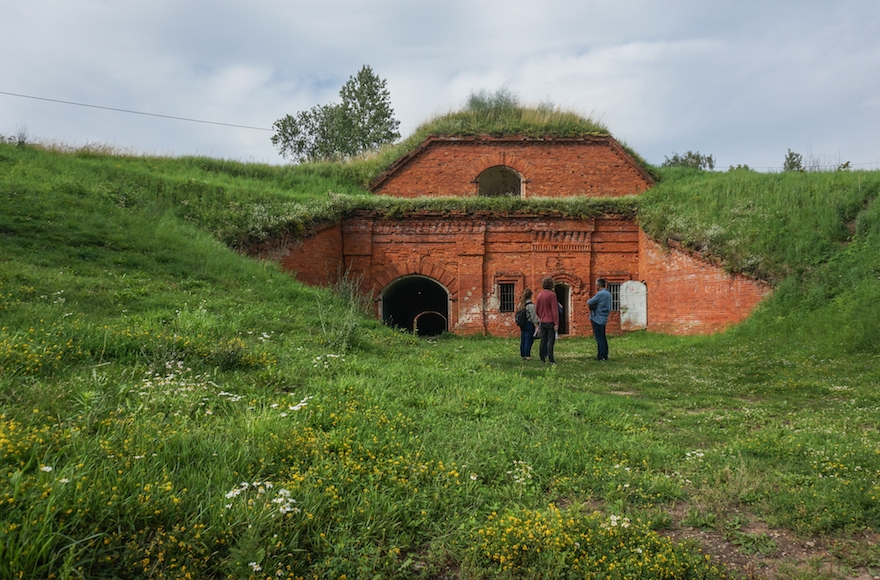 A film crew preparing to record at the former concentration camp known as the Seventh Fort in Kaunas, Lithuania, July 12, 2016. (JTA/Cnaan Liphshiz)

(JTA) — Lithuanian soldiers training to fight Russian troops pitched tents on the grounds of a former concentration camp and burial ground for Jews in Kaunas.

A battalion of special forces troops camped Monday at Seventh Fort, the first of dozens of concentration camps established by Nazi Germany following its 1941 eastward invasion, the Kauno Diena news website reported Thursday. The deployment is part of a military drill.

The Lithuanian Foreign Ministry did not immediately respond to JTA questions about the exact nature of the deployment.

The remains of 5,000 murdered Jews are buried at the fort in mass graves that are marked by a few poles and rocks. Relatives sometimes visit the site to light candles in memory of the dead.

Privatized by the government in 2009, the Seventh Fort, a disused 18-acre bunker complex, is run by a nongovernmental organization headed by Vladimir Orlov, a 38-year-old amateur historian and military enthusiast.

His organization charges entrance fees to the grounds, where it operates summer camps for children and hosts private events. Revenues are used for the site’s preservation as an educational institution where the genocide is taught alongside Lithuanian military heritage, Orlov told JTA last year. He declined to say how much revenue the site generates and how much is spent on commemoration.

The Jewish Community of Lithuania last year said the privatization was a “huge mistake” that happened despite its stated opposition.

Like the other two Baltic states, the Lithuanian government’s concern about the expansionist policies of Russia has prompted it to update its own defense capabilities. This summer, thousands of troops trained with NATO contingents across the country.

Efraim Zuroff, a hunter of Nazis and the Simon Wiesenthal Center’s point man on issues concerning Eastern Europe, condemned the deployment as showing “incredible lack of sensitivity” by the authorities at a site where Lithuanian militiamen led the wholesale slaughter of thousands of people within the space of two days in July 1941.

Zuroff, who has written extensively about Lithuania and the Seventh Fort, said the deployment raises concerns as to potential desecration of burial grounds, since the area where the bodies are buried “is not fenced off,” he added.

Between July 4-6 in 1941, local militiamen belonging to the pro-Fascist National Defence Battalion carried out the murder of 3,000 people at the Seventh Fort. That unit was a precursor of the collaborationist Security Police Battalions, which worked with the German Nazis in occupied Lithuania.