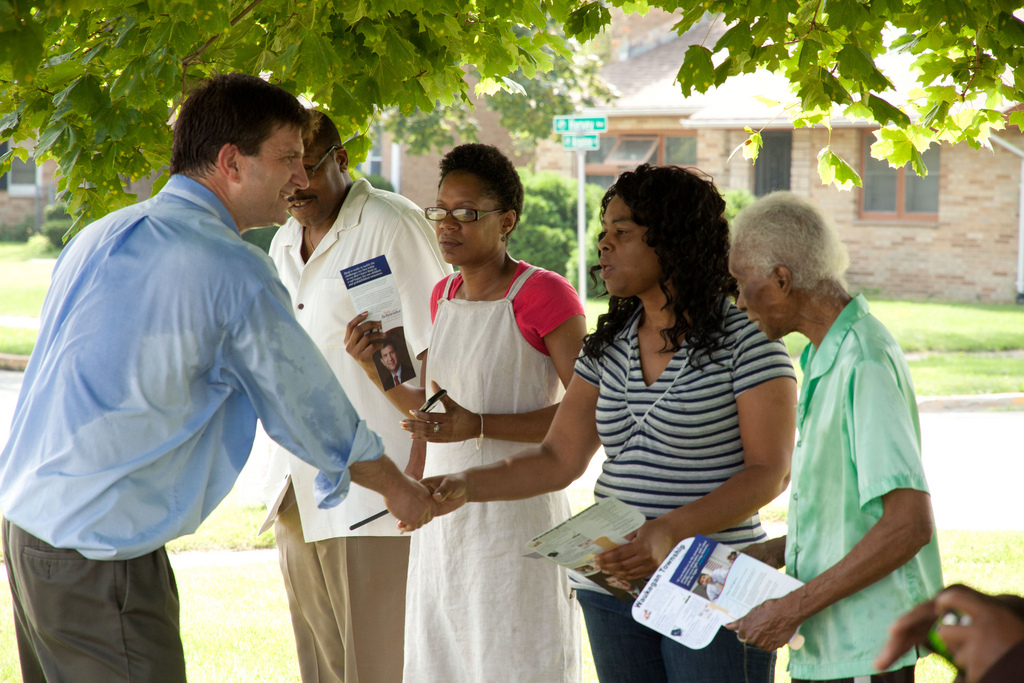 Brad Schneider, then a candidate for Congress in Illinois, greeting voters at the North Chicago Community Days Parade, Aug. 6, 2011. (Courtesy Schneider for Congress)

WASHINGTON (JTA) — A Jewish congressman from Illinois pulled his support for a Jewish candidate in the state’s Democratic primary for governor after the candidate named a running mate who has been harshly critical of Israel.

“On August 31, I was surprised to learn through press reports that Senator Daniel Biss had selected Chicago Alderman Carlos Ramirez-Rosa as his running mate,”  Rep. Brad Schneider, D-Ill., said in a Facebook entry posted Saturday.

“I was immediately concerned about some of Alderman Ramirez-Rosa’s past comments about the United States support of our ally Israel, and his affiliation with a group that is an outspoken supporter of the Boycott, Divestment and Sanctions movement against Israel,” he said. “Following conversations with Senator Biss and Alderman Ramirez-Rosa, I have informed the campaign of the withdrawal of my support.”

Ramirez-Rosa is affiliated with the Democratic Socialists of America, which last month passed a resolution supporting the Boycott, Divestment and Sanctions movement against Israel.

A Bernie Sanders delegate to the Democratic National Convention last year, Ramirez-Rosa said at the time that he hoped that Palestinian issues would be addressed at the convention.

Supporters of Biss, a progressive state senator who is running in a field of nine for the nomination, defended Ramirez-Rosa and said he was personally opposed to BDS. They noted that he voted in favor of a 2015 law that divested Chicago from companies that were divesting from Israel.

Schneider’s 10th District near Chicago has a substantial Jewish population which leans more conservative than many Jewish communities and has swung back and forth between Republicans and Democrats in recent years. Before running for office, Schneider was active in pro-Israel groups, including the American Israel Public Affairs Committee and the American Jewish Committee. After Biss named Ramirez-Rosa, Schneider came under fire for backing Biss from Jeremy Wynes, who is mounting a challenge to Schneider next year.

Biss, a mathematician, is the son of noted violinists Paul Biss and Miriam Fried, and the brother of pianist Jonathan Biss. There is at least one other Jewish candidate in the crowded Democratic field for governor: J.B. Pritzker, a venture capitalist.

Schneider in his statement appeared to leave open the possibility of re-endorsing Biss.

“I remain hopeful that, as Alderman Ramirez-Rosa learns more about the importance of the US-Israel partnership to both our nations, the unique challenges Israel faces as the only democracy in a very dangerous neighborhood, and the commitment of the vast majority of the Israeli people to peace and a two-state solution, he will reconsider his positions,” he wrote.