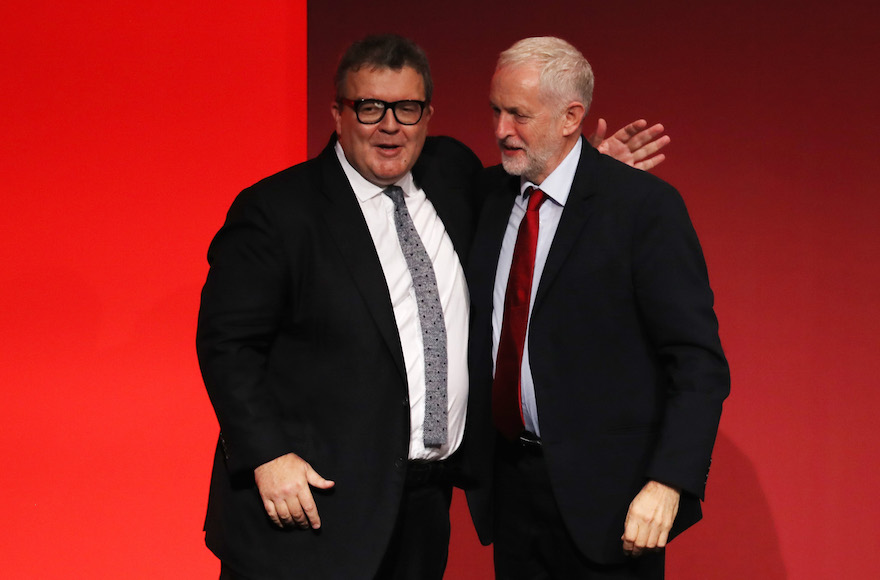 The rules, which have been backed by Labour’s resurgent leader, Jeremy Corbyn, and the party’s national executive committee, explicitly tighten the party’s stance toward members who are anti-Semitic or use other forms of hate speech, including racism, Islamophobia, sexism and homophobia.

One of the new rules says expulsion will occur in the case of any member “holding or expression of beliefs an opinions” that involve prejudice.

But the rules do not define what constitutes anti-Semitism. Corbyn has backed a definition adopted earlier this year by the British government. Based on the International Holocaust Remembrance Alliance, it includes examples of demonization of Israel. But it is not immediately clear whether Labour will follow that definition in deciding what constitutes anti-Semitism.

The British Board of Deputies welcomed the new rules, but added in a statement that it will be watching how they are applied.

“Will those who have maliciously questioned the historical record of the Holocaust, those who have engaged in anti-Jewish conspiracy theories or called for Jews to be purged from Labour still be welcome in Labour, or will they be thrown out as they so obviously should be?” the statement read.

The new rules follow the eruption of a new scandal within Labour. At an event held on the fringes of the main party conference in Brighton, Israeli-American author and pro-Palestinian activist Miko Peled said people should be allowed to question whether the Holocaust took place in the name of free speech.

Denying the Holocaust is illegal in the United Kingdom.

Tom Watson, Labour’s deputy leader, vowed the party would investigate the speaker and said he was disgusted the party gave him a platform.

Labour has been under scrutiny in British media and the political establishment since the 2015 election. Corbyn, a hard-left politician, called Hezbollah and Hamas his “friends” at a 2009 event in which he hosted representatives from the terrorist groups in the British Parliament. He has since said he regrets those remarks.

Under Corbyn, Labour’s membership surged thanks to enrollment by activists and voters from the far left, including people who made anti-Semitic statements, often in connection with Israel. Ken Livingstone, a former mayor of London, repeatedly insisted that the Nazis were Zionists, leading to his suspension in April. Corbyn has resisted calls by major British Jewish groups to expel Livingstone, who denied that his statement was anti-Semitic.

The Jewish Leadership Council, an umbrella group, said the decision not to expel Livingstone was “deeply shocking” and “highlights Labour’s disregard for repairing the historic but broken relationship with the Jewish community.”

Labour has expelled or suspended dozens of members for making comments deemed anti-Semitic, but others have not been sanctioned or been readmitted.

Last year, Shami Chakrabarti, a human rights activist and Labour member, compiled a report on anti-Semitism in Labour that the Board of Deputies of British Jews and other mainstream communal groups said was a “whitewash.” The report asserted that while there is “occasionally toxic atmosphere” against Jews in Labour, anti-Semitism is not prevalent in the party’s ranks.

But a British parliamentary committee of inquiry last year upheld claims that the Labour Party’s leadership is failing to confront serious anti-Semitism in its ranks.

According to an analysis conducted by the Campaign Against Antisemitism of online chatter by Labour supporters, they are eight times likelier to express what the group deems anti-Semitic rhetoric than supporters of other large parties, whose chatter on social networks also was analyzed.