Why Orthodox Jews are flocking to this gritty English town 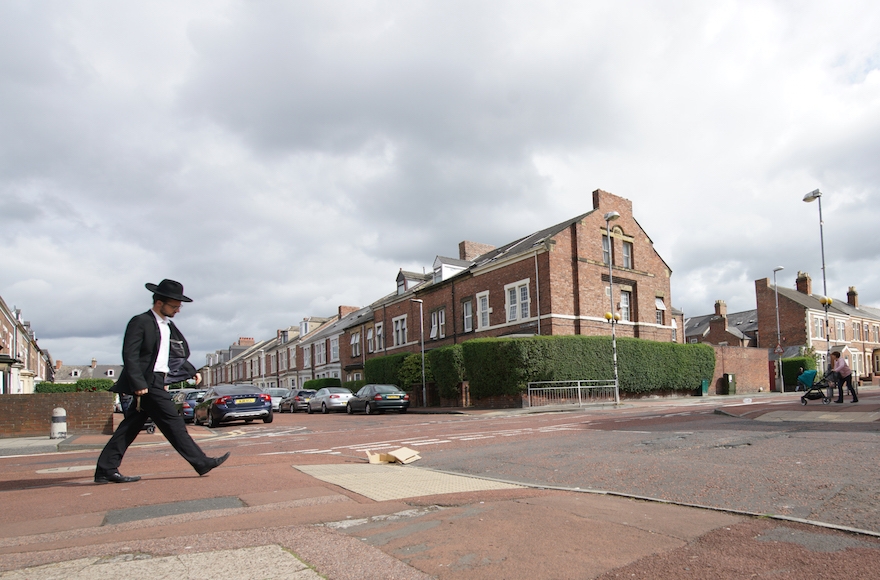 GATESHEAD, England (JTA) — It’s lunchtime, and as they wait for their sandwiches at a kosher deli, five young haredi Orthodox men have a lively discussion in Yiddish about Jewish texts.

Such a scene may be mundane in Jerusalem or New York, or even Antwerp or London. But it’s not a sight that many outside Britain would associate with Gateshead, a gritty miners’ town in northern England — a region that has seen its once large Jewish communities decline dramatically in recent decades.

Yet due to a unique set of circumstances Gateshead, which sits directly across the River Tyne from the city of Newcastle, has become home to the United Kingdom’s fastest-growing Jewish community. A tight-knit congregation of 8,000 haredi residents now calls Gateshead home, and its size is not its only unusual aspect: The Jewish community here also has an unusual marriage of intellectualism with insularity and suspicion of foreign cultural influences.

Why has the Jewish community in Gateshead doubled in size since 2008?

Opinions vary and there are many factors. Locals cite everything from relatively low housing prices and the leadership of the local chief rabbi to Gateshead’s more longstanding qualities, notably its commitment to educating religious women alongside its renowned yeshiva for boys, one of Europe’s largest.

Whatever the reason, residents and other observers agree that the Gateshead Jewish community has achieved spectacular success in an unlikely setting.

To Jonathan Arkush, the president of the Board of Deputies of British Jews, Gateshead has become “the haredi equivalent of Oxford: a unique university town for the very devout and a citadel of Orthodox intellectualism.”

The most prestigious institution of education in town is the Gateshead Yeshiva, a seminary founded 88 years ago with a student body now of 300 aged roughly 15 to 23. The teens and young men study 12 hours a day and live in dormitory rooms inhabited by three to four students.

The Gateshead Yeshiva’s reputation opened the door to at least five other yeshivas that are widely regarded as excellent. This, in turn, created the nucleus of a community of teachers who live here permanently. And that has helped make Gateshead into a major hub of intellectual activity in the haredi world, alongside the town’s seven Jewish bookstores. (The biggest, Lehmanns, is a well-known communal institution with 40,000 volumes in stock.)

Several students told JTA that graduating from the Gateshead Yeshiva will improve not only their knowledge of the Talmud but their prospects of finding a quality shidduch, or match for a wife.

“Studying here will definitely affect who we marry,” said Yishai Rose, 20, of London. “A girl who wants someone who’s well-developed in his learning, a very, very good student, well, if you went here and did well here, the better girl you’ll get.”

This wasn’t always the case, according to Joseph Schleider, a former leader of the Gateshead Jewish community and a historian who has studied the local Jewish community since its establishment in the 19th century by Jews fleeing persecution in czarist Russia.

“In Lithuania, nobody wanted to marry a rabbi. It meant poverty” to women who were not brought up inside the haredi education system, Schleider said.

But in Gateshead, this began to change in the 1940s, when a seminary for women and girls opened. That provided “a nucleus of 400 girls who want only someone with rabbinical status,” he said.

This was “a very powerful development that changed the face of the Gateshead Jewish community more than anything else,” he said, and it laid the foundation for the community’s current “renaissance,” as Schleider called it. Another seminary for women opened in 1998.

Still, Gateshead had a far smaller Jewish community less than a decade ago, when there was one small kosher bake shop and little spiritual activity outside its main synagogue, which is located behind the yeshiva. It did not have the amenities to pull in young couples or retain yeshiva graduates wanting to start a family.

Those started popping up in Gateshead shortly after the arrival in 2008 of its current chief rabbi, the New Jersey-born Rabbi Shraga Feivel Zimmerman. He’s known here simply as “the Rov,” a Yiddish pronunciation of the word rabbi.

“Before the Rov, things had been the same for many, many years,” said Shimon Guttentag, an senior administrator at the yeshiva, adding that the change has improved the quality of life for Jews “tremendously.”

Schleider said that Zimmerman — who declined to be interviewed by JTA, citing a busy schedule — opened up the community, which Schleider said was more averse than it is now to interacting with the outside.

“For all of many years we’ve been here at Gateshead Jewish community essentially isolated,” Schleider said in an interview last month, referring to the insular attitudes. During the interview, he also noted that men wearing jeans is frowned upon by some members of his deeply conservative community.

Schleider said the insularity changed somewhat under Zimmerman’s leadership, as he “decided he’s not going to be buried in the synagogue but be a communitywide rabbi.”

One of Zimmerman’s reforms was to allow the opening of Gateshead’s first kosher restaurant, Blooms, a takeout place. Previous rabbis had opposed the opening of such a shop to avoid unsupervised interaction between the sexes. But Zimmerman approved it on condition that men and women be served at separate hours.

More critically, Zimmerman led a massive investment in education for small children with the help of donors from outside the relatively impoverished community of Gateshead, transforming the town into an attractive option for large families. He also created couples counseling and other social services programs especially suited to haredi recipients. And under his leadership, communal representatives began to liaise more closely with municipal officials, locals say.

Yet this relative openness notwithstanding, the Gateshead Jewish community and its leader remain ultra-conservative, to the right of the majority of British Jews. The community shuns most media and cultural influences that are deemed foreign and morally corrupting. In June, Zimmerman called for the removal or resignation of another Orthodox rabbi from London, Joseph Dweck, over Dweck’s assertion that the growing acceptance of homosexuality in society was a “fantastic” development for humanity. 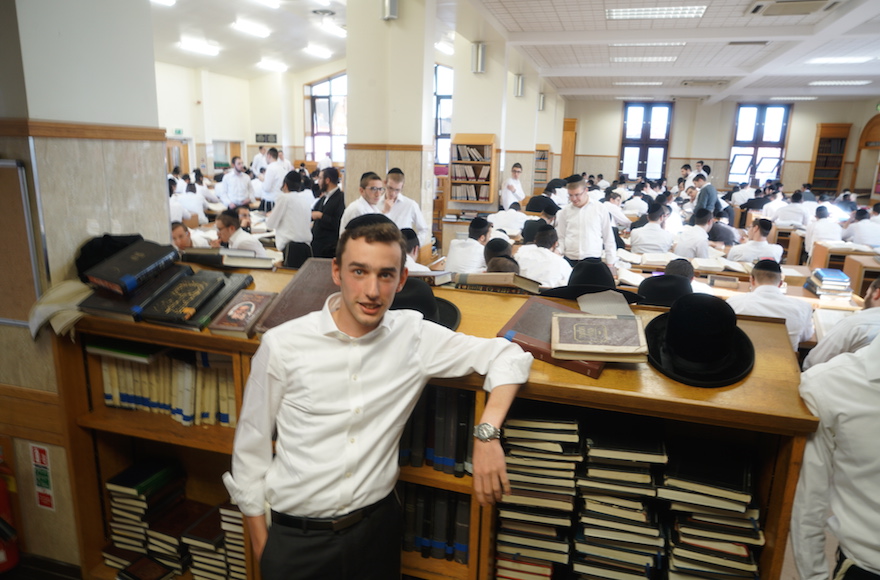 For many haredim, Gateshead’s appeal is an economic one: With housing becoming unaffordable in London, many religious Jews are looking northward for solutions. In recent years, some have moved to Manchester, the only other city in England that has seen its Jewish community grow.

But now, “even prices in Manchester are rising,” leading many haredim to consider Gateshead, said Guttentag, a father of 11 whose family was among the first to settle in the town.

Gateshead is also one of the few places in Britain with a large Jewish community where anti-Semitism is not a primary concern.

The Gateshead Yeshiva doesn’t have any guards or even a perimeter fence.

“We are mindful of the situation today but thankfully, we’ve not had serious incident and it’s not a major problem affecting us,” said Rabbi Gershon Miller, a senior educator at the yeshiva.

Schleider said that part of this reality is the relative scarceness of “ethnic populations” — a reference to Muslims. According to a recent poll, Muslims in the United Kingdom are significantly more anti-Semitic than the general population. Muslim extremists are responsible for about half the anti-Semitic attacks in the kingdom.

The combination of all these factors and more — including the proximity of Newcastle International Airport, an important amenity for haredi families with large numbers of relatives in Israel, the United States and beyond — have transformed Gateshead from an old, sleepy community to a magnet for haredi families.

But progress came with a price, said Schleider, who misses the more personal nature of the community when it was smaller.

Whereas Zimmerman’s predecessor, Bezalel Rakow, who led the community for 40 years until his death in 2003, was “like our father,” Zimmerman is more like “an executive director.”

“The community has seen tremendous growth,” Schleider said, “but has also become big, impersonal and less old-worldly for people like me.”