How this pristine 15th-century Hebrew Bible survived the Inquisition 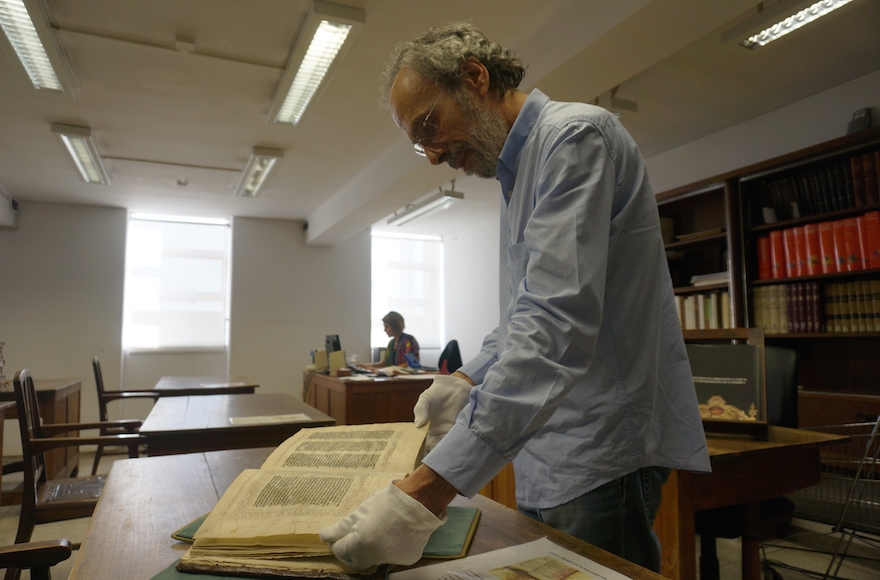 COIMBRA, Portugal (JTA) — From its mountaintop perch, the University of Coimbra towers majestically over the downtown square that used to be the regional headquarters of the Portuguese Inquisition.

It’s a fitting location for the 737-year-old university, the seventh oldest in the world, which outsmarted and outlived the campaign of persecution against Jews and freethinkers unleashed by the Catholic Church and Portugal’s rulers in 1536.

“This place was almost literally an ivory tower of knowledge during those dark times,” António Eugénio Maia do Amaral, assistant director of the university’s 500-year-old library, recently told JTA.

Thanks to the university’s undocumented policy of subterfuge against the Inquisition — Amaral said its librarians essentially hid many books that censors would likely have wanted to destroy, reintroducing them to the indexes only after the Inquisition was abolished in 1821 — Coimbra was in possession of a collection of rare, pristine Jewish manuscripts found nowhere else.

One such manuscript is the Abravanel Hebrew Bible.

Ranked by the university in a 2012 statement as its rarest artifact, the handwritten Bible from the 15th century is perfectly preserved. The book is filled with drawings on parchment that are so vibrant, they seem to have been recently created. 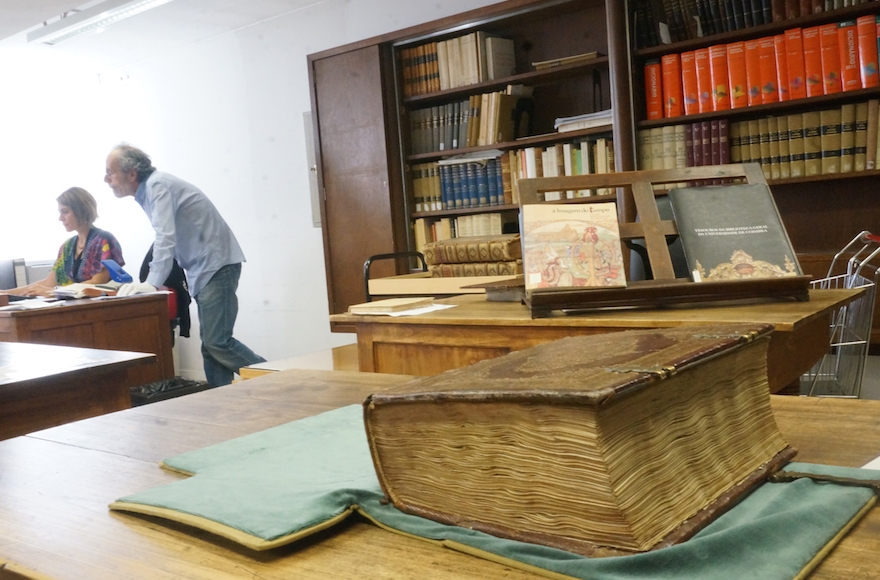 The Abravanels —  a distinguished, wealthy Sephardic family with branches in Spain and Portugal that fled to Amsterdam and the Balkans during the Inquisition — commissioned 20 such Bibles. The volume in Coimbra is among the best preserved of the handful whose whereabouts are known today.

The book is worth north of $3 million, according to the university’s Joanine Library, which in 2013 was recognized as a UNESCO World Heritage Site. That’s where the Bible is kept — along with hundreds of other precious manuscripts — inside a huge vault with special climate control and aerial disinfection facilities.

The vault is typically only opened to scholars. Yet last year, Amaral took JTA inside to see the Bible. There was a brief moment of confusion when the employee asked to locate the book said she could not find it in the index system. But Amaral, who has worked at the library for more than 20 years, shrugged and said calmly that he would have to “let the fingers do the looking” once inside the vault.

Amaral may have been laid back, but he was anything but cavalier. He expertly navigated the labyrinthine vault — two cards with digital keys are required for access — while donning librarian gloves. He took care not to breathe directly on the books he handled, so as not to introduce moisture.

Alongside its technological solutions, the library employs a uniquely time-tested and green method for pest control: For centuries, it has been home to a colony of nocturnal, insect-eating bats. In the evenings, when the library is closed, the tables beneath their flight paths are covered with furs in order to protect  them from the bats’ excrement.

The University of Coimbra has little information on how exactly it came to possess the Abravanel Hebrew Bible, possibly because it was hidden or scrubbed from the library’s indexes to hide it from Inquisition agents.

What makes the Abravanel Bible so rare, however, isn’t just its age — it’s the pristine condition. Across the Iberian Peninsula, numerous books remain that Jews smuggled out during centuries of Inquisition, at risk to their own lives, but they are damaged. One such specimen: An 1282  copy of the Mishneh Torah, the code of Jewish religious law authored by Rabbi Moshe ben Maimon, or Maimonides. The book has whole passages that an Inquisition censor singed away, making them lost forever. It’s kept at the 400-year-old library at the Portuguese Synagogue in Amsterdam, which was founded by refugees from the Inquisition.

The second-rarest specimen at Coimbra’s library is another Bible dating to the 15th century. The Latin-language volume was one of the world’s first printed books, prepared by partners of Johannes Gutenberg, the inventor of the print machine. Printed in 1462 — just 12 years after the original 42-line Gutenberg Bible which is on display in Mainz, Germany — the one in Coimbra is the only surviving copy of an edition of four 48-line Bibles printed by two of his partners.

Language differences aside, the printed book looks similar to the handwritten one. Both have illustrations and hand-drawn margins that writers used to keep their text straight before the invention of print.

“The margins and drawings were added to the printed copy to make it seem as though it was handwritten,” he said.

This retrograding was partly done for aesthetic reasons — readers were used to seeing them — and partly as a “precaution,” Amaral said, because some Christian fanatics considered print machines “the works of the devil.” 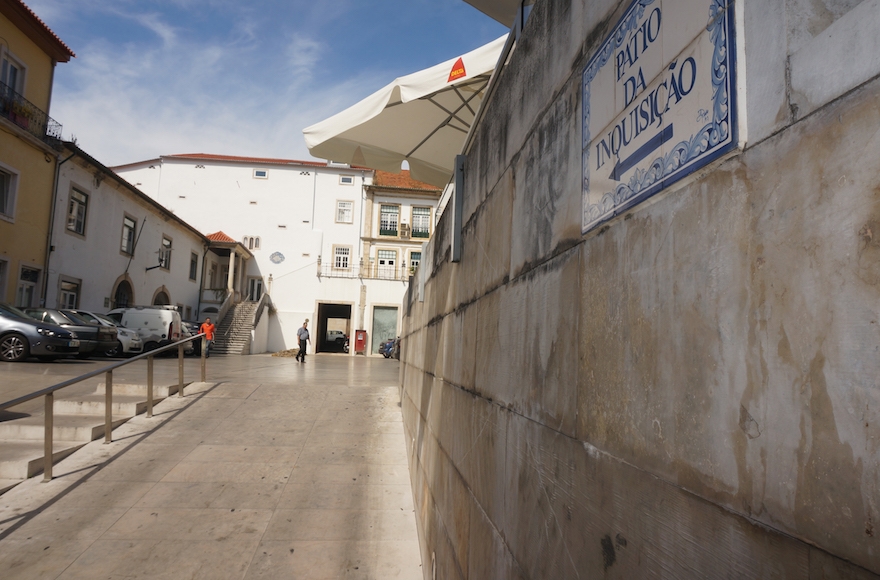 Thousands were murdered during a series of Portuguese Inquisitions that followed the Spanish Inquisition of 1492. At least 200,000 Jews fled the Iberian Peninsula for the Netherlands, South America and the Middle East during the period, which lasted nearly three centuries. Thousands more stayed and practiced Judaism in secret for generations.

The library’s archives also contain rare, chilling records that reveal the bureaucracy behind the Inquisition’s barbarity. For example, the minutes of a 1729 trial against Manuel Benosh, a Portuguese Jew, indicated that he was “released” by the Inquisition to civil authorities with an instruction that he be “punished in flesh” — a euphemism for a death sentence by burning.

Outside of Lisbon, Coimbra University is the largest owner of Portuguese Inquisition verdicts.

“It was a mission that made this place not only a victim and opponent of the horrors of the Inquisition, but also a witness to them,” Amaral said.

True to its tradition of defiance, the library was also one of the few institutions to openly refuse to comply with the censorship policies of the regime of António de Oliveira Salazar, Portugal’s pro-fascist dictator of 34 years, until 1968.

“Again there were the same tricks as during the Inquisition,” Amaral said. “In the end, we now see who has prevailed.”