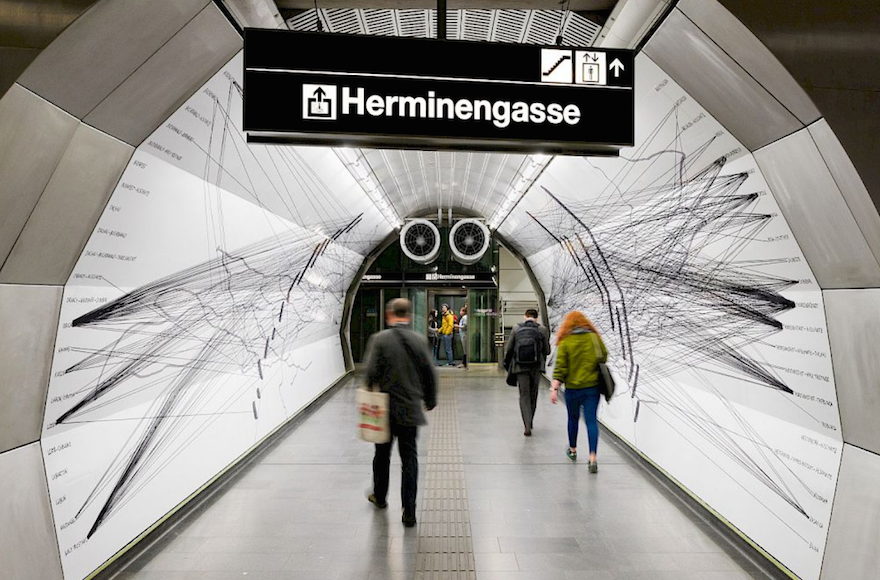 Michaela Melián's installation at the Herminengasse subway station in Vienna's 2nd District depicts the local buildings where Jews were forced to live before their deportation to death camps. (Iris Ranzinger/KÖR GmbH)
Advertisement

VIENNA (JTA) — Austria’s largest urban transport firm for the first time commemorated the Holocaust, in a subway art installation in memory of hundreds of victims who lived as prisoners on a single street.

The Wiener Linien installation unveiled Thursday at the Herminengasse, or Herminen Alley, station features a graphic scheme in which each identified victim who had lived on that alley is represented by a black line, stretching through a visual representation of its 21 buildings to Nazi death camps across Europe. In the research that preceded the making of the installation, historians tallied victims who were forced into shared dwellings on Herminengasse, including hundreds not previously identified.

During the unveiling ceremony, which occurred 75 years after the peak year of deportations from Herminengasse, some 120 people huddled outside the drafty subway tunnel on whose interior walls the installation is mounted. Politicians and Jewish community leaders, along with curious passers-by, made up the crowd.

“Looking at this place is staring at the abyss of the Nazi death machine,” said Tina Walzer, a historian who for the past year researched for the Wiener Linien the names of all the Holocaust victims who lived on Herminengasse, a small street inside Vienna’s 2nd District that once was part of the city’s Jewish ghetto.

Forcing Jews into the alley in Vienna’s 2nd District exemplifies the public nature of the persecution of Jews in Austria, she said. In Germany and other countries considered Aryan, by contrast, the Nazi authorities took steps to limit the general population’s exposure to the persecution.

“Two houses on the street were mini concentration camps, where Jews were kept in crowded conditions inside apartments until they were taken away one day on a lorry,” Walzer said. “This all happened publicly, at daytime, on a street where also many non-Jews lived. Everybody saw what was going on.”

Other houses on Herminengasse also had Jewish residents, though they were not defined as concentration locales. 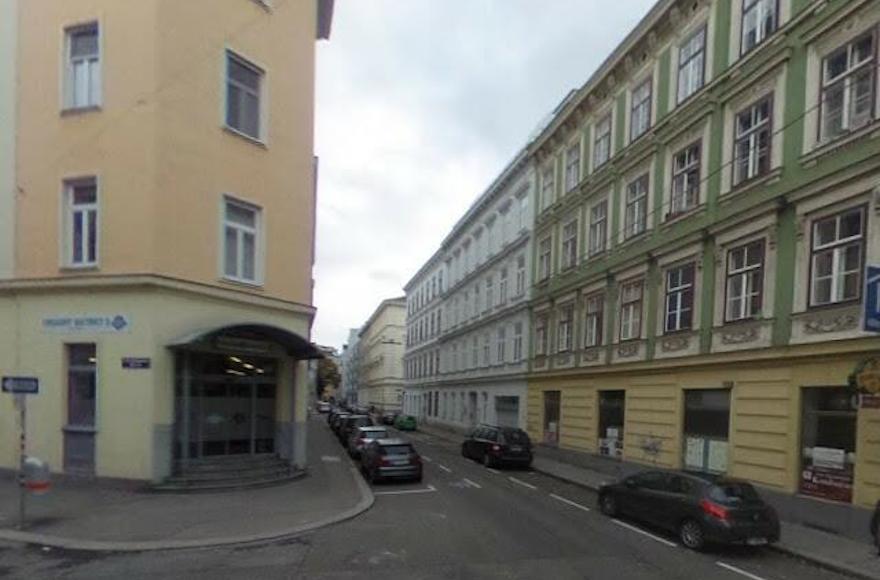 A view of Herminengasse in Vienna. (Google Street View)

The Jews imprisoned at Herminengasse were taken to the Aspangbanhof train station, where more than 40,000 of them were loaded onto trains and transported to death camps. The former train station, where city authorities last month unveiled another monument for the deported, was surrounded by residential buildings. Residents could see the deportations from their windows.

Using police records and other archives, Walzer’s research team added hundreds of hitherto-unidentified victims to the company’s initial list of 700 unknown victims. The report produced by Walzer was the first time that professional historians attempted to compile a complete list of victims from a single street in Vienna, according to Oskar Deutsch, the president of the Jewish Community of Vienna.

M0re than 65,000 Austrian Jews died in the ghettos and concentration camps of Eastern Europe.