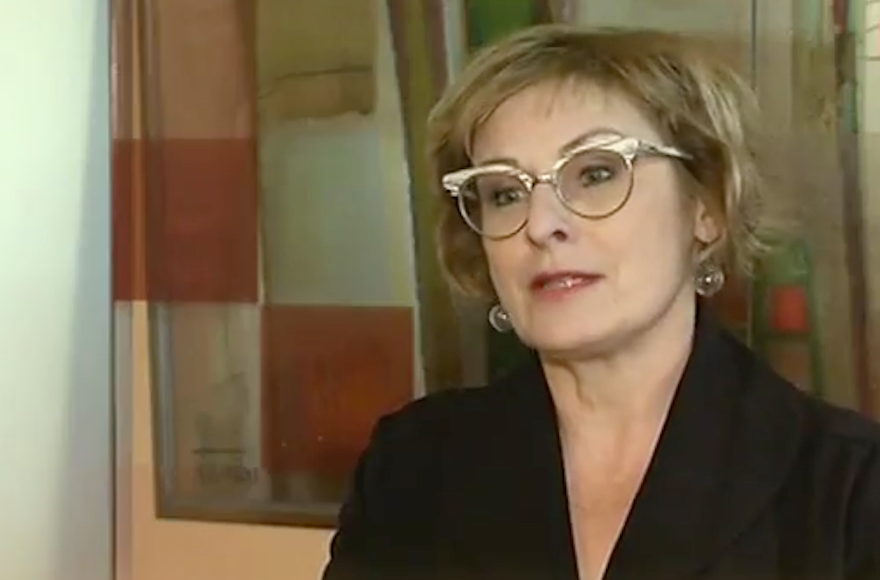 (JTA) — One of the oldest publishing houses in independent Lithuania withdrew the books of a best-selling author over her criticism of a nationalist who is accused of complicity in Holocaust-era crimes.

The recall of Rūta Vanagaitė’s books came one day after she revealed that she is in a relationship with Efraim Zuroff, an Israeli hunter of Nazis whom many Lithuanian nationalists despise.

The Alma Littera publishing house on Friday said it began recalling from book stores all the books it published by Vanagaitė, whose 2016 book “Our People” about the Holocaust is credited with breaking some taboos in Lithuanian society about collaboration during War World II.

Occurring amid an acrimonious debate in Lithuania about the subject and growing nationalism boosted by Russian aggression, the literary scandal illustrates the borders of what is acceptable criticism of national heroes in Lithuania. It also has pitted advocates of Vanagaite, who complained of Soviet-like censorship against her, and her critics who insisted she provocatively insulted the memory of a great patriot.

The publisher cited in a statement a remark that Vanagaite, 62, made to a journalist about Adolfas Ramanauskas, an anti-Soviet combatant during the war, who admitted to commanding troops that witnesses said butchered Jews in the ghetto of Druskininkai, 75 miles southwest of Vilnius.

Vanagaite’s controversial statement was not about the Holocaust.

She said her research into Ramanauskas’ death in 1957 suggested he committed suicide after betraying the names of fellow nationalists to the KGB, which captured Ramanauskas the previous year.

“Rūta Vanagaitė’s statements are unacceptable to us and incompatible with the values of the Alma Littera publishing house,” its CEO, Danguolė Viliūnienė, said in a statement.

The previous evening, Vanagaite revealed she has for the past year been the significant other of the Holocaust historian Efraim Zuroff, who is the Simon Wiesenthal Center’s director for Eastern Europe and a well-known Nazi hunter. Lauded by some Lithuanians for exposing Holocaust-era crimes, Zuroff is also hotly detested by others. He has frequently featured in denigrating caricatures of him in mainstream Lithuanian media, including the country’s leading news website, Delfi.

Zuroff and Vanagaitė met in 2015 while researching the best-selling book “Our People,” which they co-authored.

“The journey through the locations of mass murders ended, the book was published and a year later unexpectedly another journey began. The journey of life together,” Vanagaitė said in an interview with Delfi. Before meeting Zuroff, she added, he “was a longtime enemy of all of Lithuania, hence my enemy as well. However during the journey through Lithuania it turned out that this enemy is an intelligent and deep person, a true friend.”

Lithuania’s first leader after communism, Vytautas Landsbergis, on Friday published an op-ed on Delfi in which he called Vanagaite a “moral scumbag” and “Mrs. Dushanski” – a reference to the Jewish KGB officer Nachman Dushanski, a Holocaust survivor who was involved in Ramanauskas’s capture. Landsbergis called on them to “go to the forest, reflect and condemn themselves.”

The reference to Dushanski, who has denied accusations that he participated in atrocities in World War II, was “particularly insidious and blatantly anti-Semitic,” Vanagaite said in a statement sent to JTA Monday, and “connects to the revelation on the same day that I am in a relationship with Zuroff.”

In his autobiography titled “Many Sons Fell,” Ramanauskas wrote that he “commanded a partisan unit” near Druskininkai. Holocaust survivor Berl Pikovsky and others described how men from what is believed to be Ramanauskas’ unit shot men, women and children at the ghetto. Though the autobiography was written before Ramanauskas’ death in 1957, it was published only in 1991, after the fall of communism.