What did Jared know? Plus other Jewish takes on the Russia Affair 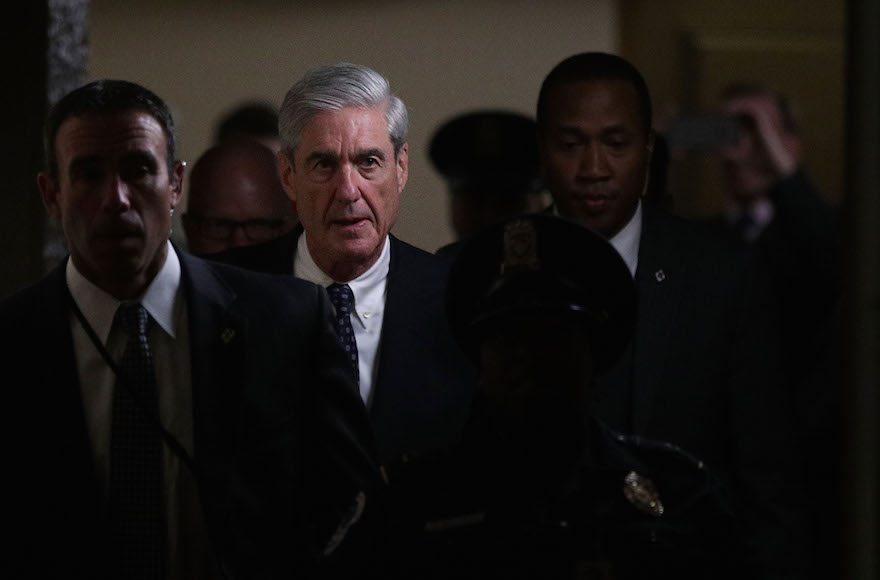 Paul Manafort, who for several months last year helmed the Trump campaign, and an associate, Rick Gates, who remained with the campaign after Manafort left and worked through Trump’s transition to the presidency, were placed under house arrest Monday for money laundering and making false statements to federal authorities.

George Papadopoulos, a foreign policy adviser to the campaign, in a guilty plea earlier in October copped to lying to federal investigators about his overtures to Russian agents on behalf of the campaign.

The indictments of Gates and Manafort have mostly to do with clientele — Russian-backed politicians in the Ukraine — separate from the main thrust of the “collusion” probe. Papadopoulos lied in January and several times thereafter about contacts he had with Russian agents while he was a foreign policy adviser to the campaign. 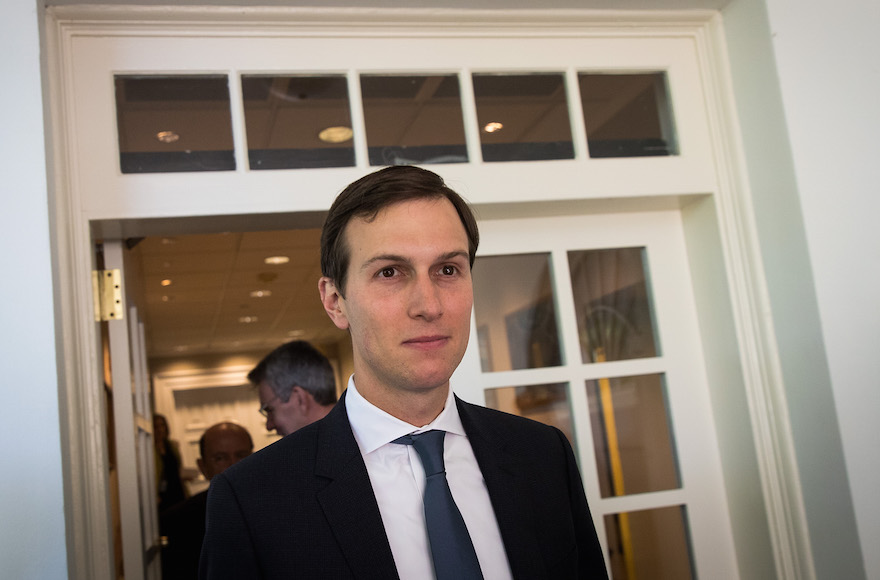 One official who may be wary of the probe is Jared Kushner, who is Trump’s son-in-law and was a senior adviser to Trump throughout the campaign. Mueller is known to be looking into Kushner’s campaign activities, and Kushner attended a separate meeting in June 2016 with Trump’s son, Manafort and another Russian figure who was seeking closer ties between the campaign and Russia. That figure, Natalia Veselnitskaya, offered dirt on Democratic candidate Hillary Clinton, as did Papadopoulos’ interlocutors, in the form of hacked emails.

Emails from Papadopoulos about his Russia contacts reached various people in the campaign. The plea he signed describes them as a “senior policy adviser,” a “high-ranking campaign official,” a “campaign supervisor” and multiple other officials. In those emails, he urged the officials to consider offers by figures close to Russian officialdom to organize a meeting between President Vladimir Putin and Trump.

It’s not clear whether Papadopoulos told campaign officials about the hacked emails. Nor is it clear to what degree Kushner knew of the adviser’s meetings with Russia. (Manafort appeared to be skeptical of Papadopoulos’ outreach, while Clovis encouraged it.)

Mueller, in releasing the Papadopoulos guilty plea, suggested there was more to come.

“Following his rearrest, defendant Papadopoulos met with the government on numerous occasions to provide information and answer questions” is how the document ends.

Papadopoulos, who called himself a senior consultant at the Hudson Institute think tank in Washington, D.C., wrote op-eds in the Israeli media in 2014 and 2015 encouraging Israel to favor Greece and Cyprus over Turkey in its natural gas development policy. (Hudson is telling media Papadopoulos was an intern in 2011 and then provided contractual work to the institute until 2014, and was never salaried.)

It’s not clear on whose behalf Papadopoulos was making his pitch, but he knew his readership: He framed his argument on the pro-settler Arutz Sheva news site with a reference to the biblical term for end times, or chaos, “tohu wabohu.” In the 2014 piece, Papadopoulos was not as sanguine about Russia as he would become: Russia and Turkey, he said, were sowing chaos in the region, and it was up to Greece, Israel and the United States to stem it.

In April 2016, Papadopoulos visited Israel and led a briefing at the Begin-Sadat Center for Strategic Studies, impressing a Jerusalem Post columnist as a “young, impressive energy expert” who said Trump saw Putin as a responsible actor worthy of serious engagement.

“We are looking forward to ushering in a new relationship between the United States and all of Israel, including the historic Judea and Samaria,” Papadopoulos said, using the biblical term for the West Bank. “Toda raba,” he signs off in decently accented Hebrew before hugging Dagan.

For Paul Singer, friendship may be having to say you’re sorry.

Paul Singer, a billionaire hedge funder and major pro-Israel donor, was a never-Trumper until he was not. He backed Sen. Marco Rubio of Florida in the Republican primaries and, unlike other donors who swallowed hard when Trump won the nomination, could not bring himself to endorse the candidate in the general election. 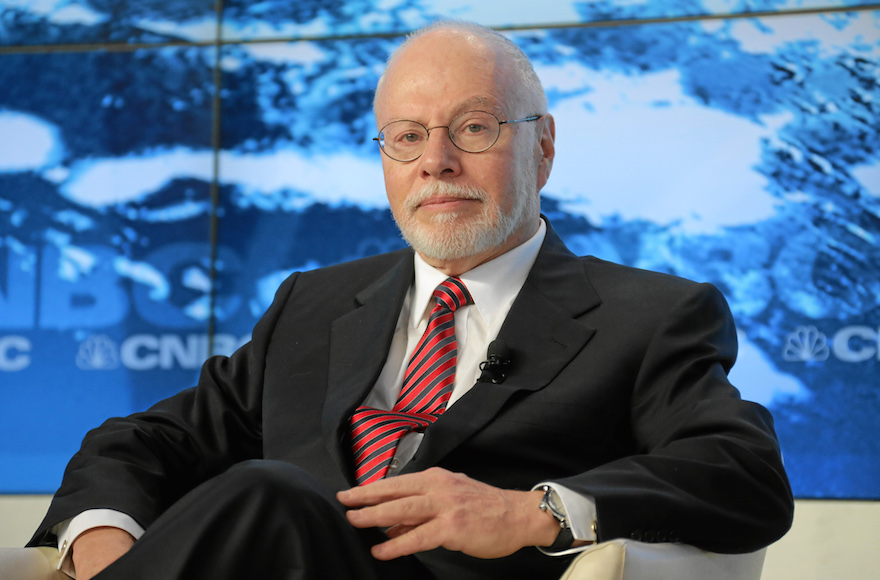 Paul Singer insists that he did not know the conservative news site he funds was using private detectives to dig up dirt on candidate Donald Trump. (Wikimedia Commons)

Singer reached out after the election and apparently patched things up with Trump, contributing $1 million to the inauguration. The fledgling conciliation had symbolic import: Singer, who has backed hawkish pro-Israel outfits like the Foundation for the Defense of Democracies and The Israel Project, was the neoconservative face of Republican big money.

All went well — until last week. Just as news of Mueller’s pending indictments leaked, it was revealed that the Washington Free Beacon, a Singer-funded conservative news site, had initially paid for a private detective firm, Fusion GPS, to dig up dirt on Trump. A Fusion operative, an ex-British spy, is behind the infamous and sordid document alleging that the Russian government has blackmailable goods on Trump — the “dossier.”

Singer, according to the Axios political news site, insists he did not know the Free Beacon was using Fusion, although he was aware that it was paying for opposition research. The Free Beacon editor and publisher say they stopped using Fusion before the dossier was created. A Democratic law firm with ties to the Clinton campaign subsequently started to pick up Fusion’s anti-Trump tab — news of which both delighted and angered Trump’s supporters last week.

Still, the news is damaging to the narrative that Trump has been peddling: That it was solely Democrats who were trolling questionable sources seeking dirt on Trump.

Axios reported that Stephen Bannon, Trump’s former top strategic adviser, the CEO of Breitbart News, and the self-designated scourge of neoconservatives and their interventionist beliefs, called Trump after the news leaked on Friday and that both men agreed it was time to “destroy” Singer.