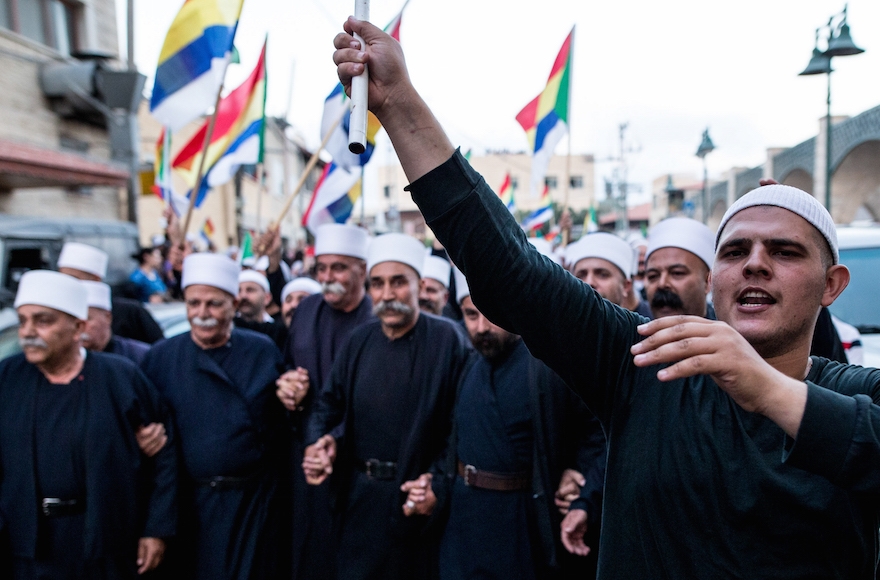 Israeli Druze attend a demonstration in the village of Yarka in support of their Syrian Druze brothers. (Basel Awidat/Flash90)
Advertisement

(JTA) — In a departure from Israel’s policy of minimal intervention in Syria’s civil war, the Israeli army said it would help defend a Druze village in Syria where Sunni militants killed nine people.

The Israel Defense Forces will prevent the village of Khadr, near its northern border, from being run over by the militants “out of a commitment to the Druze population,” the IDF said in a highly unusual statement of allegiance to a group that is seen as loyal to Syria’s contested president, Bashar Assad.

The statement follows an explosion inside the village Friday in which nine were killed and 23 were wounded, according to reports from Syria. Later in the day, an Israeli living in the Israeli Druze town of Majdl Shams was lightly wounded by a bullet shot from inside the Syrian territory into Israel. Hundreds of Druze from the Golan in Israel protested the violence in Khadr; a few dozen attempted to cross the border illegally to reach the village.

Israel has refrained from any major intervention in the war that was not deemed to have short- or medium-term implications for Israel.

But the IDF statement reflected how the Druze are valued inside Israel as brethren by many Jews because thousands of them enlist in the IDF with the blessing of their communal leaders. Several Druze soldiers have reached the upper echelon of the army.

However, in Lebanon and Syria, the Druze minority is widely perceived as allied not only with the Alawite group of Assad, but also with the Shiite Hezbollah terrorist group, which fights for Israel’s destruction.

The Druze follow a monotheistic religion that is related to but distinct from Islam. Unlike other Druze populations in Israel who serve in the Israeli military, the Golan population of some 20,000 has been careful not to align itself publicly with the Jewish state, which annexed the Golan in 1981.

Some Druze residents of the Golan, an area that Israel captured from Syria in 1967, have taken Israeli citizenship in recent years after decades of spurning it in protest of what their leaders called occupation. Hundreds of Golan Druze have applied for citizenship after decades in which only 1,700 took the step.

Following the incident in Khadr, hundreds of Golan Druze were allowed to march to the border to demonstrate their solidarity with the village’s residents. The area is a closed military zone, but security forces did not block the march, the news site Walla reported. Several dozens of them cut the border fence and crossed over in a bid to reach Khadr and defend it before they were apprehended and brought back by Israeli troops.