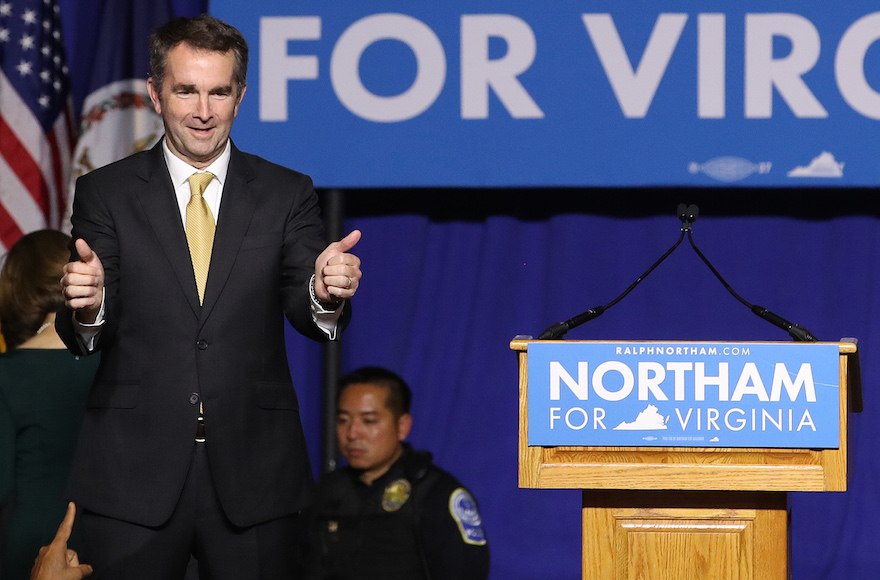 WASHINGTON (JTA) — The big post-Election Day headline is the stunning Democratic sweep in Virginia’s gubernatorial and House elections, coupled with the predicted Democratic win of the governor’s mansion in New Jersey.

Republicans are wondering what this says about the train that was Trumpism.

In Virginia, Ed Gillespie was an establishment Republican who ran a campaign modeled after President Donald Trump’s shocking win a year ago. Gillespie focused on social hot-button issues like preserving Confederate statues and the alleged proliferation of illegal immigrant gangs. And the GOP candidate lost, big-time.

Democrats, meantime, are marveling at a unity they had believed was dissipating following last year’s contentious primaries clash between Sen. Bernie Sanders, I-Vt., and Hillary Clinton, who defeated Sanders but came up short in the general election to Trump. Sanders’ pick in Virginia, Tom Perriello, lost in the primaries but went all in for the establishment-backed winner, Lt. Gov. Ralph Northam. Both the party establishment and the leftists who buck it were hailing the close post-primaries cooperation between Perriello and Northam as a model for the Democrats ahead of next year’s midterm congressional elections.

No Jews won major contests — but there are Jewish takeaways in this off-year election. Here are five:

Virginia over the last couple of decades seems to have transitioned from Republican red to Democratic blue, with the Democrats close to taking the House of Delegates in a result no one anticipated.

A big reason for the flip? The professionals crowding into Northern Virginia — NOVA to initiates — attracted to the Washington suburbs because of the proliferation of jobs in government, lobbying and the high-tech sector, and to Virginia’s D.C. suburbs, particularly because of the high-quality schools and bucolic settings.

It’s enough to drive a prominent Trump backer, Jerry Falwell Jr., to call for secession — of northern Virginia to the District of Columbia.

“DC should annex NOVA and return the governance of VA to Virginians!” Falwell, the president of the evangelical Liberty University in the state’s southwest, said on Twitter.

DC should annex NOVA and return the governance of VA to Virginians! The founders intended DC to include all fed employees who are conflicted

The influx of blue voters is also a result of a sharp growth in the Jewish population. (Non-Orthodox Jews overwhelmingly trend center-left and left.) Synagogues report burgeoning membership growth. Ahead of the 2012 elections, an official of the Washington-area Jewish federation told JTA that Northern Virginia’s Jewish population grew to some 100,000 in 2010 from about 60,000 a decade earlier.

Did white supremacists get out the vote?

Virginia’s Albermarle County was closely watched this election: It includes Charlottesville, the home to the University of Virginia and a liberal enclave in conservative central Virginia. Democrats are notoriously tough to get out in off-year elections, and Albermarle was seen as a bellwether of the party’s get-out-the-vote operation. Get the vote out here, the thinking went, and Democrats have a shot.

The vote got out. Northam carried the county with a 12,000-vote majority, compared to Terry McAuliffe, the incumbent Democratic governor, who won it by 6,500 votes in 2013.

We can’t know why Democratic polling surged unless and until the county’s voters are polled. But it’s not a stretch to conclude that the Aug. 12 march in Charlottesville by white supremacists and neo-Nazis, which culminated when a suspected one of their number rammed his car into a crowd of counterprotesters, killing one, galvanized liberal turnout.

A virtual poster, in Yiddish

In Mea Shearim, a haredi Orthodox neighborhood in Jerusalem, the best way to take the political pulse is by looking up — at the stone walls, where densely written posters break down the issues in Yiddish.

Not so much in 21st-century New York City. The battle between two Orthodox Jewish candidates for the Borough Park seat on the City Council there was fought on WhatsApp, the messaging app. And the issues in Brooklyn were not the esoterica that often drives divisions among the fervently Orthodox in Israel.

The virtual barbs in the Borough Park race, the Forward reported, were sharp and prosaic. Loyalists to Yoni Hikind, son of the veteran state lawmaker Dov Hikind, alleged, without proof, that his rival, Kalman Yeger, had ties to pro-Palestinian activist Linda Sarsour. Hikind, in turn, was dinged for being single.

Some political traditions die hard, though: The WhatsApp messages, like those Mea Shearim posters, were more often than not anonymous. And in Yiddish.

Yeger, handpicked by the incumbent, David Greenfield, who is leaving the post, trounced Hikind.

Jacob Frey, 36, a marathon runner, supposedly faced a hurdle in his bid to become mayor of Minneapolis because he wasn’t born in Minnesota. (The native Virginian fell in love with the city a decade ago, when he ran in a marathon that qualified him for a spot in the Pan American Games.)

His Jewish Democratic credentials are impeccable, however: At the College of William and Mary in Williamsburg, Virginia, he befriended Ron Rapoport, a politics professor, and did the Jewish holidays with his family. Rapoport’s dad was the legendary Democratic Party kingmaker — and Texan Jew — B. Rapoport. (Former President Bill Clinton delivered the eulogy at B. Rapoport’s funeral in 2012.)

B. Rapoport recognized talent: He told Frey when he was still in college that the young man had the gift for politics, according to a Star Tribune profile of the city councilor.

Frey, who was endorsed by the Star Tribune, is an attorney and a member of the board of the of the Jewish Community Relations Council: Minnesota and the Dakotas.

The JCRC, in a release, noted that the Twin Cities scored a twofer: St. Paul elected its first African American mayor.

Dawn Zimmer made headlines when she became mayor of Hoboken, New Jersey, in 2009: She was Jewish, and a woman, in a city on the Hudson River known for a large Italian-American community and its views of the New York City skyline. As president of the City Council, she became acting mayor when her predecessor resigned in a corruption scandal, then was elected in her own right in a special election.

Five years later she made headlines again when she revealed that the administration of Gov. Chris Christie tried to make Superstorm Sandy recovery funds contingent on her backing a real-estate project favored by the administration. Coming soon after reports that the governor’s aides blocked access to the George Washington Bridge to punish another Democratic mayor, Zimmer’s 2014 allegation prompted an FBI investigation.

This year, the popular Democratic mayor surprised her constituents by opting not to run again, saying she preferred to focus on climate change. Instead, she endorsed City Councilman Ravi Bhalla.