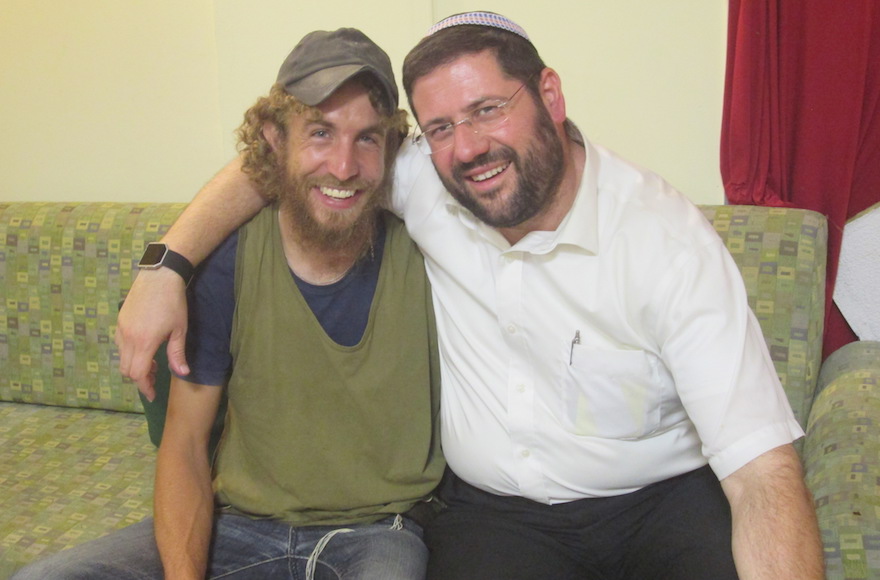 Rabbi Avi Berman, right, director of OU Israel, with Gavriel, once a troubled teen who sought guidance at the Zula Center and now married, a proud father and a Zula center counselor himself. (Michele Chabin)
Advertisement

JERUSALEM – Hadas was just 11 when her mother began to suffer from postpartum depression so severe it rendered her incapable of caring for herself or her children. Her father and an older sibling moved out, leaving Hadas to care for her mother.

“My mother didn’t raise me. I raised her,” said Hadas, now 18. “When I was 16, I couldn’t take it anymore and left home. I moved in with my grandmother, and I didn’t care about school.”

After a blowup with her grandmother and nowhere else to go, Hadas ran to the Pearl and Harold Jacobs Zula Outreach Center, a magnet in Jerusalem for at-risk youth from religious families.

“I’d heard about the Zula from friends,” Hadas said, seated on one of the center’s many sofas as several teens in an adjoining room jammed with professional musicians. “This is the place that saved my life. It’s like a family. The people here give me strength. I wait all week to come here.”

Hadas, who asked that her last name not be published, is one of some 4,000 young people aged 14 to 24 who regularly visit the Zula center in this city’s downtown to socialize and receive support from staff social workers, a psychologist, an educational director and musicians who double as counselors. Launched by the Orthodox Union in 2001, the center is located in a sprawling basement on Jaffa Road, a major thoroughfare just minutes away from Jerusalem’s bustling bar scene.

But unlike the dozens of bars and nearby alleyways, which at night attract thousands of teens and young adults in search of alcohol and drugs – including many religious Israelis and Americans on gap-year yeshiva programs – the Zula is an alcohol- and drug-free zone meant to offer positive succor to the youths.

On the evenings that it’s open — Tuesday, Thursday and Saturday nights — the center is filled with hundreds of young people seeking companionship, live music and emotional support. The Zula offers classes in art, art therapy, creative writing and music, as well as a study hall.

In addition to the O.U., the center receives some funding from the Jewish Agency for Israel, the Israeli Education Ministry, private donors and the Jerusalem municipality. Rabbi Avi Berman, executive director of O.U. Israel, said the Zula is the “only drop-in center” directed at Modern Orthodox teens that is open and staffed during hours the bars are open.

Teens hear about the Zula through word of mouth and say they are drawn to the center because its staffers encourage but don’t pressure them to open up about their lives and problems. The atmosphere is laid back. Zula is Hebrew for “chill out.” 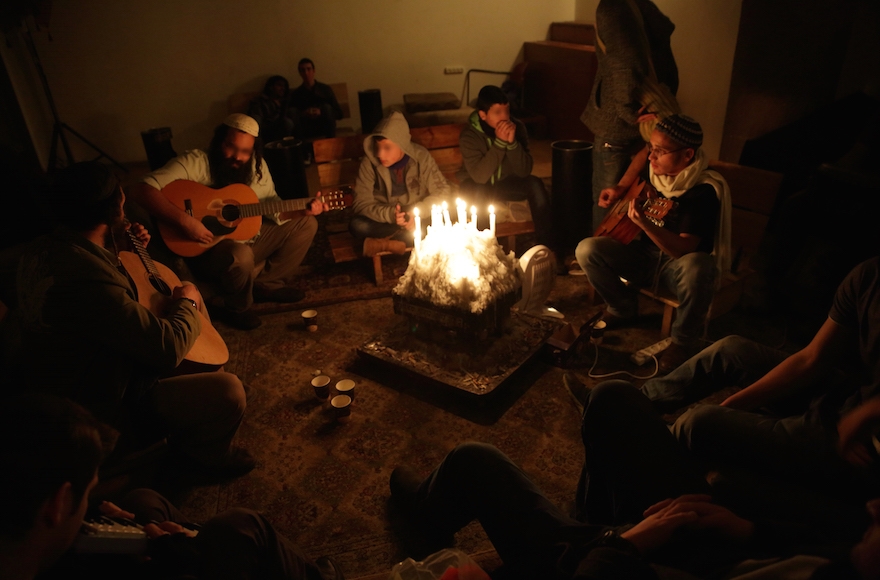 At night, the Zula Center is often packed with teens making music and clustered around a candle-filled table that serves as a sort of indoor bonfire. These teens’ faces have been blurred to protect their identity. (O.U. Israel)

Most of the youths are from Hebrew-speaking Israeli families in Jerusalem, the West Bank and beyond, but about one-quarter of the teens come from English-speaking families. That includes gap-year students whose parents back in America have no idea their sons or daughters are spending much of their time in Israel not studying in yeshiva or seminary but “getting wasted on the streets of Jerusalem,” Berman said.

Many of the teens who come to the Zula have gone “off the derech” — meaning they are no longer religiously observant, or are questioning their religious lifestyle. Others maintain an Orthodox lifestyle but are struggling with anything from university qualifying exams to sexuality.

Berman said O.U. Israel decided to open the Zula after its staffers realized there are many teens from religious backgrounds who are struggling and need “some guidance and love.” They chose the Jaffa Road location “because that’s where everyone is hanging out.”

“What we give is unconditional love to every male and female who walks in — and some are as young as 11  or 12 years old,” he said.

The O.U. is well-equipped to help, Berman said, thanks to decades of experience working with youths. So much experience, in fact, that the Zula’s staff trains high school educators and Education Ministry officials on how to create a Zula-like environment in schools, where kids can sit with an adviser and seek help but not be judged.

Claudie Kalman, who works with at-risk teens at the Jerusalem Municipality and supervises the Zula’s female staffers, said many kids feel the Zula is a home away from home because of its uniquely religious yet nonjudgmental atmosphere.

“Here they encounter love and acceptance,” Kalman said. “They can talk about things that hurt them, things they care about” — but which may be taboo in their religious communities. “Here they can ask questions they can’t ask anywhere else. They still have their faith, but no longer feel at home in the religious world. They’ve found a home here.”

On a recent Thursday night, the Zula was packed with teens and young adults making music, immersed in art or creative writing, or just hanging out. Others clustered just outside the Zula, within easy earshot of the music blaring from the bars. Many lounged on sofas or rugs in the center’s main room, where dozens of candles created a warm glow.

Yona, whose family immigrated to Israel from California 10 years ago, said he comes every week because he wants to stay out of trouble. Before friends told him about the Zula, he would go out to drink and smoke joints around the corner.

“If the Zula didn’t exist, I’d probably still be doing what I was doing before,” Yona said.

At 1:30 a.m., after everyone but staffers had left, Gavriel – once a troubled teen himself – told his story. Now 28, Gavriel left his West Bank home at 15 after being traumatized by the government’s destruction of the Gush Katif settlement bloc during Israel’s 2005 withdrawal from the Gaza Strip.

“I wanted to get away from people,” he recalled. “I was smoking, drinking and had no direction. I became a shepherd. But then I got to the Zula and it was the one place where I could be exactly who I am. I felt people loved me as I was.”

After spending countless hours with the Zula’s counselors, Gavriel said, he felt empowered enough to finish high school and serve in the army. Now married and a father, he’s also a Zula counselor. Gavriel said he feels joyful every time he comes to the Zula.

“The feeling I had as a kid coming here is how I feel as a counselor,” he said. “It’s not about being a role model. It’s about being here for the kids.”