Meet the Israelis bringing the ‘Start-up Nation’ to Silicon Valley 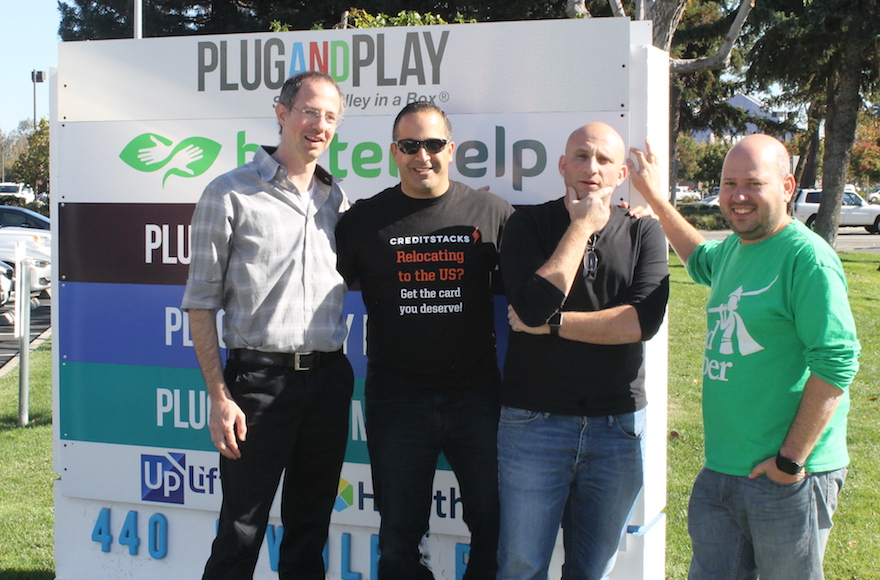 From left to right: Yuval Machlin, Kfir Eyal, Daniel Shaked and Alon Matas in front of Plug n' Play, a Silicon Valley incubator in SIlicon Valley where they all work. All have been in California for different lengths of time, but all talk about returning to Israel someday. (Ben Sales)
Advertisement

SAN FRANCISCO (JTA) — When he brings Israeli entrepreneurs to Silicon Valley, Gili Ovadia gives them a list of what not to do.

It still takes them a while, said Ovadia, before they understand how Americans work.

“Whenever I talk to Israeli companies, I say if you want to succeed [in tech], get your suit and come here,” said Ovadia, who heads the Israeli government’s economic and trade office on the West Coast. “You won’t succeed with emails, phone conversations and websites. In the end of the day, it’s personal relationships.”

Ovadia works alongside an ecosystem of Israeli entrepreneurs who have made it their mission to draw Israeli techies from Tel Aviv to the Bay Area — and to help them thrive once they are here. Even as Israel has built a reputation as a tech hotspot, these entrepreneurs say the Jewish state is small potatoes compared to Silicon Valley, which acts as a fount for the latest innovations and startups — and, crucially, the cash that funds them.

“If you want to be a movie actor, you need to be in Hollywood,” said Daniel Shaked, who moved from Israel to Silicon Valley two years ago and is the founder of ClipCall, which connects homeowners to service professionals like plumbers and electricians. “This is the Hollywood of high-tech. In Silicon Valley there are thousands of startups looking for the same funding sources, and they’re here, next to them. They can ride a bike and meet people.”

The past five years, a network of Israeli-focused organizations has emerged in the Bay Area. Israeli Executives and Founders Forum, or IEFF, facilitates discussions between 1,200 Israelis who work in the area; UpWest Labs seeks to bring early-stage Israeli companies to the Valley. The Israeli Collaboration Network, or ICON, connects Israeli and American entrepreneurs. J-Angels brings together Israeli and American Jewish investors.

As such, Israelis who come to Silicon Valley land in friendly territory: IEFF counts more than 100 Israeli-run startups in the Bay Area. The Israeli Consulate estimates that there are anywhere from 60,000 to 100,000 Israelis in the region, which comprises San Francisco, Oakland, San Jose and the cities around them. And as a possible sign of just how entrenched Israeli entrepreneurs have become in Northern California, after a lobbying campaign by Israeli expatriates, United Airlines began a direct flight from San Francisco to Tel Aviv last year.

“The Bay Area has a very unique activity of Israelis,” said Oded Hermoni, IEFF’s co-chairman. “Israelis can feel at home because you don’t have to be American-born to be successful in Silicon Valley.” 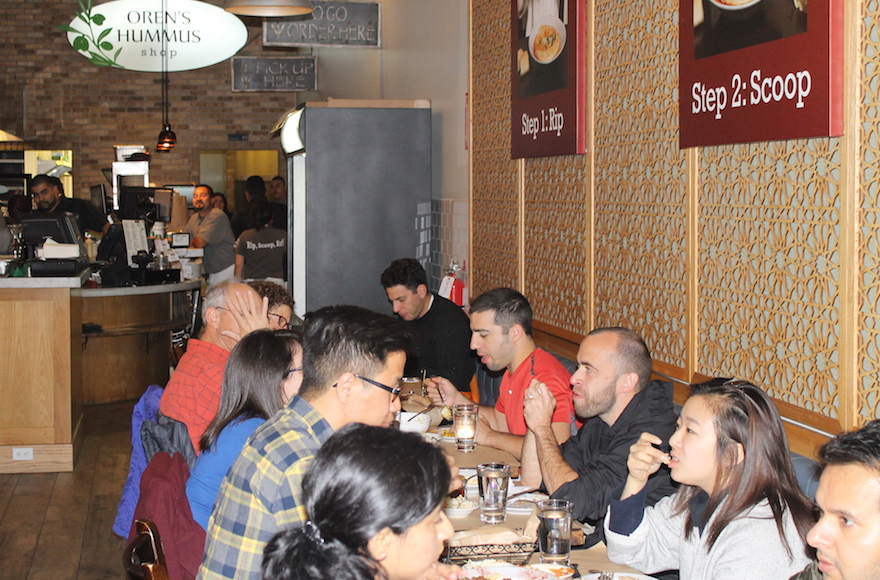 After inventing many of the tools that make telecommuting and smart investing possible, it’s somewhat ironic that the the tech industry still places such a high premium on in-person meetings. But several Israeli techies said that old-fashioned networking is the best way to advance a career.

“It’s like saying you’re a bride and you want to find a groom in Silicon Valley,” said Darya Henig Shaked, who founded WeAct, which brings Israeli women entrepreneurs on missions to meet with investors in the Bay Area. “You need to get to know each other, to look each other in the eyes. That’s not hows it works, that you ask for investors a continent away.”

After founding two successful startups and a kindergarten in Tel Aviv, Kfir Eyal, 43, figured it would be easy to land a job at a Silicon Valley tech giant like Apple or Facebook. But when he moved to the Bay Area five years ago, he spent months sending out resumes, without getting any bites. In the end, he took a senior position at a financial tech company — but only after making a connection at an Israeli poker game.

His lesson: Israeli contacts were valuable, but they shouldn’t be that difficult to make. So four years ago he got involved with an organization called TechAviv that brought Israeli entrepreneurs together every couple of months to eat, drink and network.

“I wouldn’t want anyone to go through this experience of ‘What do I do now that we landed?’” said Eyal, who now serves as vice president for sales and business development for CreditStacks, a startup offering credit cards to recent expats to the United States. “Now it’s become more of the norm to help people.”

But Israelis still face the acclimation challenges that Ovadia is trying to combat. Yuval Machlin, who moved to Silicon Valley two months ago, noticed the difference in decibels. In Israel, when techies meet they immediately begin talking over each other. In America, Machlin said, he has walked into meetings where 30 employees are just sitting there in silence.

“Sometimes you see someone who says something you disagree with,” said Machlin, who works at Tangent Logic, a product services company. “In Israel, three seconds wouldn’t have passed and you would have interrupted him and started a discussion, which I think is more efficient. The people here know what they’re doing, and that’s proven, but it’s different. I didn’t expect it to be that different.”

Israel sees itself as the “Start-up Nation,” the title of the popular 2009 book on the country’s entrepreneurial bent, but many Israelis find it an eye-opening experience when they realize just how small their role in the world of tech really is. The Jewish state might have a good reputation, but it’s still foreign to Silicon Valley, said Moshik Raccah, a co-founder of IEFF. The qualifications that so impress Israeli investors — like service in the Israel Defense Forces’ elite 8200 intelligence unit — mean nothing to most American venture capitalists or employers.

Plus, said Raccah, Israelis have names that can be hard to pronounce.

“Our names, [like] Kochavit, how do you say that?” he said. “Even if it’s a bias people would never admit, it’s still a challenge.” 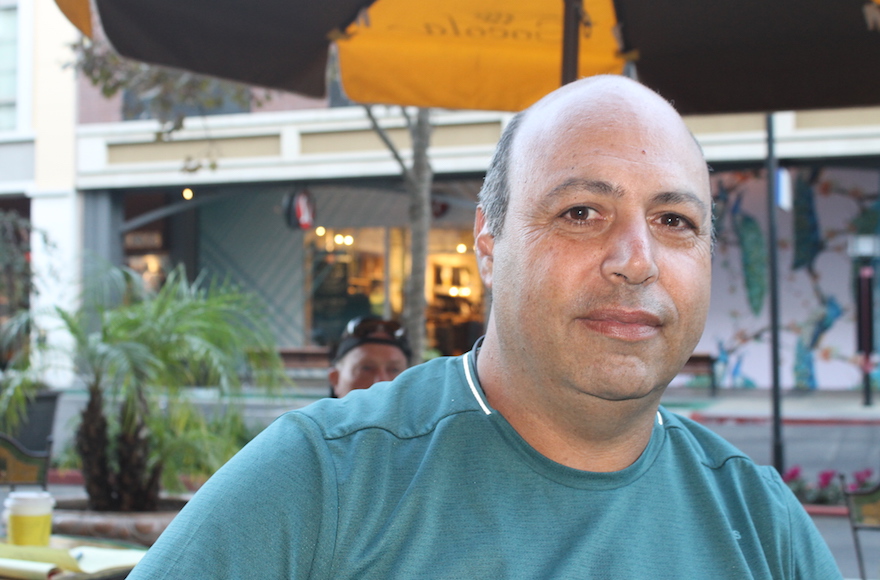 Moshik Raccah moved to Northern California from Israel in 2001 and co-founded the Israeli Executives and Founders Forum, which brings together groups of Israeli techies in Silicon Valley. (Ben Sales)

To overcome these issues, Israelis are forging connections in everyday life as well. Palo Alto’s JCC, for example, has made a special effort to cater to Israelis. Adults gather there to barbecue on Israeli Independence Day or plant trees on Tu b’Shvat, the Jewish arboreal new year. Middle schoolers take courses run by Eitanim, a project-based leadership program affiliated with the Israeli American Council that focuses on developing students’ entrepreneurial skills while strengthening their connections to Israel. There’s an apartment complex in the town of Sunnyvale that has so many Israeli expats that they’ve nicknamed it “the kibbutz.”

Near the kibbutz is a falafel shop that serves relatively obscure Israeli food like sabich, an egg and eggplant sandwich, and a chickpea dish called masabacha. In Palo Alto, the more mainstream Oren’s Hummus, founded by serial tech entrepreneur Oren Dobronsky, offers creamy Israeli-style hummus in several styles, as well as coffee — Turkish and instant — imported from Israel.

But such comforts can’t erase the challenges of living an ocean and 10 time zones away. Raccah said he sees fewer Israelis making the move than in past years. In part, that’s because telecommuting has made communication easier. Also, the growth of  New York’s tech scene has drawn Israelis who want to be close to the action and money, but “only” an 11-hour flight away.

“If you’re sending your CEO or BizDev team to the U.S., it’s much easier to work from New York,” Raccah said.

In San Francisco, he added, “you have no overlap of workday and the flight is much longer.”

Still, for many Israelis, the opportunities and creature comforts provided by the Bay Area are unparalleled. There’s also the bonus of residing in one of America’s most liberal states — a situation not lost on the mostly secular and left-wing entrepreneurial set, who see the distance from Israel’s right-wing government as a bonus.

Despite these perks, however, for most of these techies, Israel is home. It’s where their families and childhood friends live; it’s where they can joke in Hebrew; it’s where they can talk over each other without getting dirty looks. The Israelis living in the Bay Area don’t rule out moving back someday —  even Raccah, who moved to the area in 2001.

“We find it harder to adapt here, to say ‘I’m American,'” Raccah said. “We’ve been so indoctrinated. I’m Israeli. I want my kids to go to the army. I want to see my family every week. I want to joke in Hebrew. That’s the stuff that we miss.”