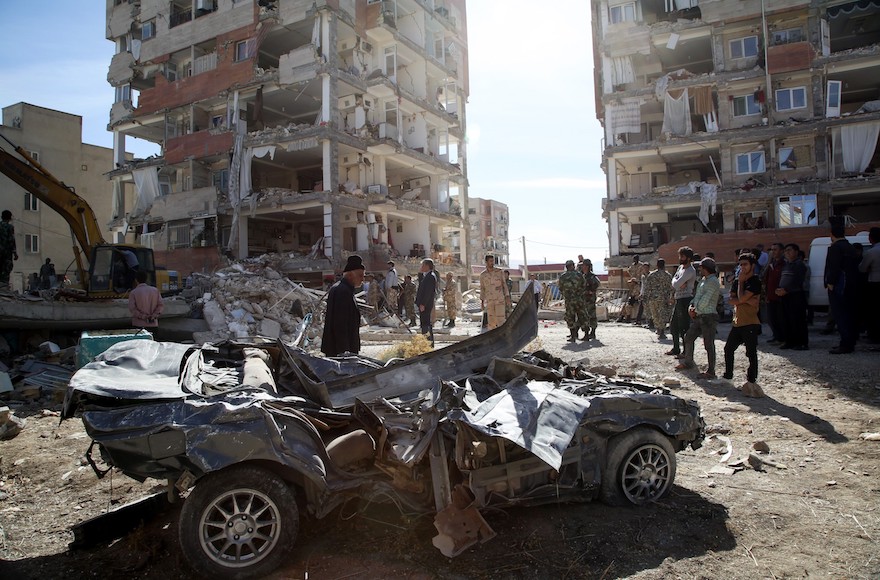 JERUSALEM (JTA) — At least 400 people were killed in Iran and Iraq when a powerful magnitude 7.3 earthquake hit the region, with tremors felt in Israel.

Rescuers searched for dozens of people trapped under the rubble in the aftermath of Monday’s quake centered on the Iran-Iraq border. Thousands were reported injured. Officials expected the casualty toll to rise when search and rescue teams reached remote areas of Iran.

The earthquake was felt throughout the Middle East. In Israel, reports came in from the north to the south, and especially along the Mediterranean coast. Those living on the high floors of apartment buildings seemed the most shaken. No damage was reported.

“I felt like I was on a boat, I thought it was vertigo,” Elad Hopper, who lives in a high-rise building in Hod Hasharon, told Israel’s Ynet news site. “Then the building’s WhatsApp group filled with messages from people who also felt the tremor.”

Israeli Intelligence Minister Yisrael Katz offered his sympathy to the countries known to have sustained casualties in the quake.

“My condolences to the people of Iran and Iraq over the loss of human life caused by the earthquake,” said Katz, who is also transportation minister.

However, Israel, which often rushes to help countries struck by natural disasters, has not gone so far as to send assistance to Iran and Iraq. Israel considers both countries “enemy states,” and has no diplomatic ties with them. Iran avowedly seeks Israel’s destruction.