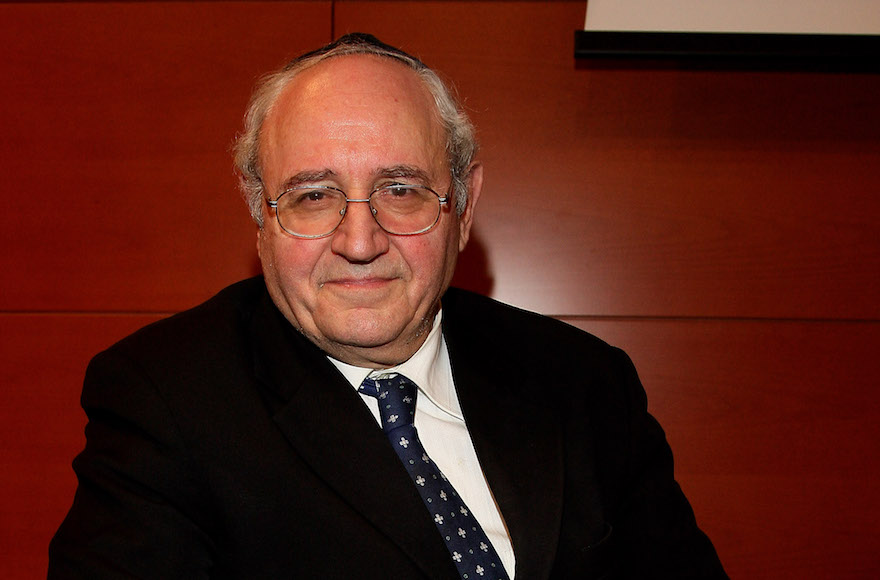 A child survivor of the Holocaust, Laras died Wednesday at 82. He had served from 1980 to 2005 as the chief rabbi of Milan and was the president emeritas of the Italian Rabbinical Assembly.

In an essay prepared for release on his death and published Wednesday on the Milan Jewish community’s news website, Laras warned that Italian Jewry is in crisis and needed a “new architecture” to face upcoming challenges. He lamented the “high level” of discord and resentment among Italian Jews, calling it “our great failure.”

Laras also noted alienation from Jewish religious observance and institutions, and deep psychological, economic and other difficulties among community members.

“Many of our families are poor or in great difficulty; many young couples do not have incomes that allow them to forge a Jewish future,” he wrote. “Many single people are abandoned; very many are ignorant of the basic ideas of Judaism and feel rejected – right or wrong – by our institutions.

“Many families have well-known problems linked to mixed marriages; many young people leave Italy because there are no jobs here. The challenge is enormous and, like it or not, we are to take it up: I urge those in roles of responsibility not to delay, and to have courage, even if they do not feel up to the task or feel oppressed by it.”

He also lamented the rise of anti-Semitism and anti-Zionism on the European left. “Today I am witness to the emergence of a new wave of anti-Semitism (especially in its ambiguous form of anti-Zionism), the betrayal of the leftists and the rapid intellectual and moral decline of Western civilization,” he wrote.

Laras said he was certain that “with tenacity,” Italian Jews would be able to cope.

Italy’s Jewish community numbers some 25,000 to 30,000. Milan, with around 7,000, has the second largest community after Rome, which is home to about half of Italy’s Jews.