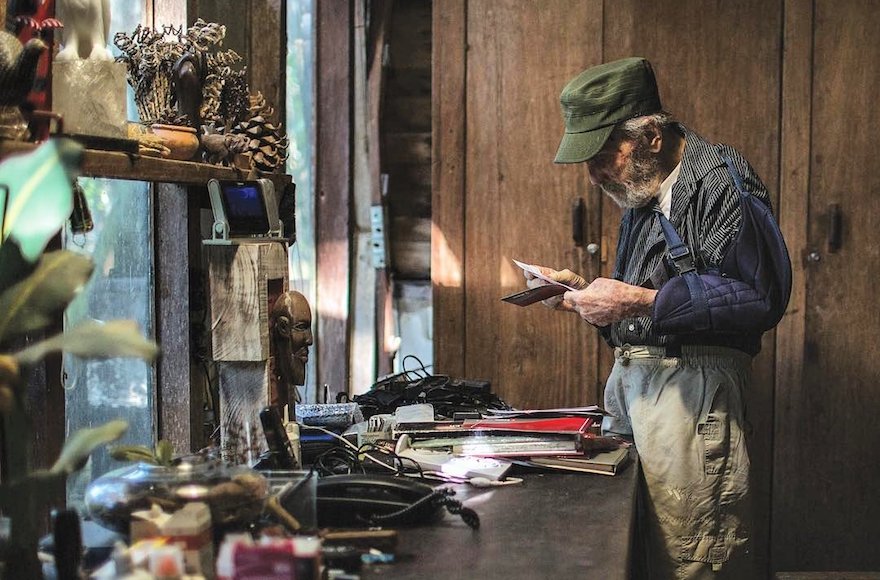 RIO DE JANEIRO (JTA) — Frans Krajcberg, one of Brazil’s most acclaimed sculptors and environmentalists, has died.

The Polish-born Jewish artist, who lost nearly his entire family in the Holocaust, died in a Rio hospital Wednesday. He was 96.

An accomplished painter, engraver and photographer, he was most famous for his sculptures made from tree trunks and roots burned by destructive wildfires.

“There are evidently in my work cultural reminiscences, war reminiscences, which emerge from my subconscious,” he wrote in 1970 “Negro River Naturalist Manifesto,” which he co-authored. “With all the racism, the anti-Semitism, I experienced in Europe, I could not do any other kind of art.”

Krajcberg trained as an artist in Europe. He escaped the devastation of World War II and arrived in Sao Paulo in 1948. In 1951, he participated in the first edition of the International Biennial in the city with two paintings.

Tired of the human brutality, he sought refuge in nature, and in 1972, moved into a treehouse in the countryside of the Brazilian state Bahia. He worked in his studio in the nearby city Nova Vicosa and dedicated himself to protecting the surrounding Atlantic Forest from further destruction.

His body was cremated Thursday and his ashes were spread in the woods, according to his wishes.

“I lost my whole family in a barbaric way. Do you know what that is?” he told Rio’s O Globo newspaper in 2015. “They [the Nazis] dug a huge hole, threw them alive inside and covered them with earth. I could not bear to live. I was alone, I wanted to get away from everything, especially from mankind.”

Karjcberg often rankled government authorities by drawing attention to Brazil’s deforestation problem. A 1989 story by The New York Times about one of his exhibitions was headlined “Using Art as a Sword to Defend Brazil’s Forests.”

He won international acclaim in 1992 when he displayed his art at Rio’s Museum of Modern Art during the city’s Earth Summit. A protege of the likes of Marc Chagall and Georges Braque, he won several biennial awards over the past three decades. Krajcberg’s pieces sell from $10,000 to $200,000.

“Bloch projected Krajcberg to Brazil and internationally,” Israel’s honorary consul in Rio, Osias Wurman, told JTA. “He attended all the Jewish holidays with the Bloch family.”

Although Krajcberg also kept a studio in Paris, he said he felt most Jewish, in his complicated way, in Brazil.

“Here I do not feel stifled by the cultivated woods of Europe or worried by European intolerance. Here I feel Jewish because I am a Jew and above all because I was forced to be a Jew, but I am not religious,” he wrote in his manifesto. “I fear the fanaticism of nationalism and of religions. I have always been an internationalist and nature made me a citizen of the world.”

Krajcberg’s sister survived the Holocaust and immigrated to Israel.