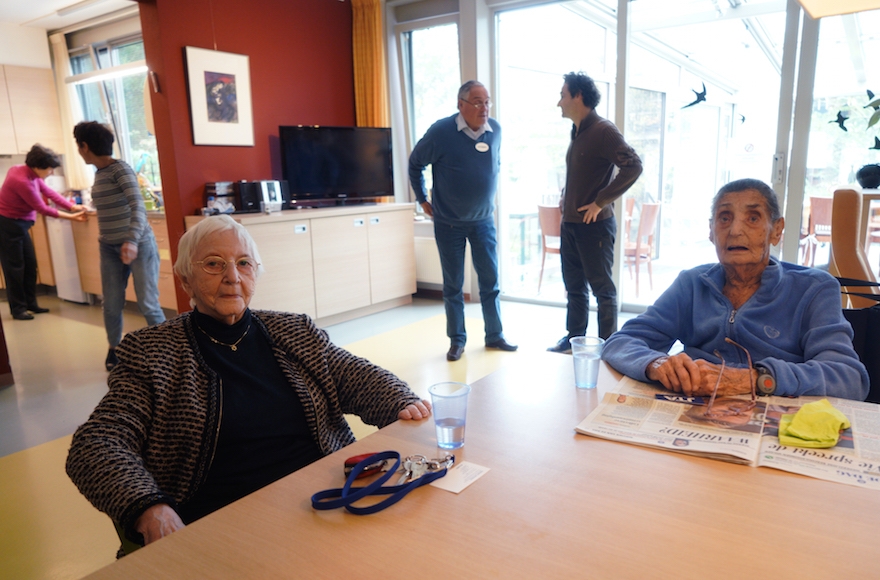 AMSTERDAM (JTA) — Henny Goudeketting, a 95-year-old Holocaust survivor, is ailing and preparing to leave the world.

Goudeketting, who was sterilized in Nazi medical experiments at Auschwitz, has neither children nor other relatives to care for her. Now, after multiple infections and recurrent falls, she’s readying to say goodbye.

“It’s kind of strange,” Goudeketting told JTA. “I know I have no future and I’m ready to die, but I’m still afraid of actually dying.”

The Amsterdam native returned to the city at 23 after surviving Auschwitz.

“My biggest sorrow is not being able to have children,” said Goudeketting, who had worked for decades as a seamstress.

Last month she was admitted to Immanuel, a small but upscale eight-room facility for the terminally ill. It is Europe’s only Jewish hospice, according to Tel Aviv University’s Kantor Center for the Study of Contemporary European Jewry.

While such facilities are common in the U.S. — the National Institute for Jewish Hospice, which was established in 1985 in New York, lists no fewer than 225 accredited Jewish hospice programs — they remain rare on the continent, where the Jewish community was decimated by the Holocaust.

Funded through private donations, as well as patient fees and some subsidies, the hospice was built by the Dutch Jewish community for survivors like Goudeketting to receive top end-of-life care.

“I’m not sure whether this is real, the luxurious treatment I’m getting here,” she said. “I’ve never experienced anything like this in my whole life.”

“If I want a fried egg, or anything else, all I have to do is buzz,” said Goudeketting, whose stay at Immanuel is covered by her insurance. “They come round in seconds to terribly spoil me.”

The Netherlands, which last year was No. 1 on Europe’s index of public health systems, has 146 hospices nationwide with an average guest satisfaction rating of 9.1 out of 10. And whereas Immanuel’s on-demand room service is a standout amenity, patients at other hospices receive similar conditions — all for a daily rate of less than $70 covered by the government or basic insurance policies.

But Immanuel is the only hospice in Europe for guests like Goudeketting who keep kosher, although there are other hospitals with palliative programs that offer kosher food. They include the North London Hospice Group, which defines itself as Britain’s first “multifaith hospice.”

It’s also the only hospice where the staff and volunteers “already know the special issues connected to caring for the generation of Holocaust survivors,” said Sasja Martel, the institution’s founding director. That’s crucial, she said, “because at the last stage of life, it’s often too late to start explaining” what those special issues are.

A case in point: At Immanuel, the staff encourages guests to resist the urge “to finish their plates,” Martel said, and only eat when they are hungry.

“Traumatized by the Holocaust, survivors and their children tend to associate eating with staying alive,” she explained. “And that’s true, but at the terminal stage eating can hasten death.”

Rabbinical or other spiritual counseling is available to guests, as is counseling on accepting death, mostly by volunteers. That’s an issue for many survivors who are conditioned to “fight death at all costs,” Martel said.

The hospice, which has an annual budget of approximately $500,000, is subtly adorned with Jewish symbols ranging from mezuzahs, menorahs and, atop one piece of furniture in the main hall, a small pile of stones of the kind that Jews place on cemetery headstones. But even though they are understated, the symbols can have a profound effect on some guests.

“The significance of little things is amplified near the end,” Martel said. “Many guests feel a need to touch their identity, reconnect with it, even if only through the symbols. Or the typical Ashkenazi Jewish chicken soup we serve, that they remember from their grandmother, or the white tablecloth on Shabbat and the candle lighting. Or just a Jewish joke.”

The importance of a Jewish setting increases for many people facing end-of-life questions, according to Jewish health care professionals. Jewish “teachings and values can provide comfort to them,” according to a 2013 study by four American researchers, including a rabbi and a physician.

Jewish liturgy, traditions and even a common language also ease some difficulties, according to a 2009 interview that Rabbi Sara Gilbert, a chaplain at Shalom Cares Hospice in Aurora, Colorado, gave the Intermountain Jewish News. ”

At Immanuel, staff are trained to accommodate the special needs of survivors like Goudeketting, who have no family, added Martel.

“We need to be conscious that for many of our guests we are all that they have, which is not necessarily the case in other hospices,” she said.

There are other sensitivity issues. For example, the hospice decided not to hire a nurse who had a German accent, Martel said last week at a symposium on hospice care in Judaism in honor of Immanuel’s 10th anniversary.

“If it was discrimination, it was a positive one for our guests,” she said.

One former patient, Bram Koopmans, said in a filmed interview before his death in 2010 that the hospice was his first contact with a Jewish community institution since staying at an orphanage for child Holocaust survivors in the 1940s.

On his deathbed, Koopmans said that after decades of avoiding his Jewish identity, staying at Immanuel made him remember the Jewish blessing over bread, or hamotzi, which he was taught at the orphanage. Holding back tears, Koopmans recited the blessing during the interview while holding one hand over his head.

“It’s been waiting in me for years and years,” he said. “It’s as though I never left.”

Koopmans asked volunteers at Immanuel to go to his home and fetch a kippah and menorah that he had hidden away, Martel recalled. He also asked a rabbi to give him a bar mitzvah at the hospice. Koopmans had a Jewish burial, which he didn’t plan to do when he first arrived at Immanuel.

Only about half of the hospice’s guests are Jewish, however. Anyone diagnosed as being terminally ill can ask to be referred here. And though capacity is limited because of Immanuel’s small size, the high turnover — the average stay is 11 days — means frequent openings.

“When we set up this home, we decided as a matter of policy that it wouldn’t be a place for Jews only,” Martel said. “We didn’t want to send anyone away.”

Subsequently, Immanuel has a second non-kosher kitchen so as not to limit the nutrition of non-Jews.

But one thing not on offer at Immanuel is assisted suicide, which is readily available in the Netherlands for the terminally ill.

The country’s parliament is now debating a controversial draft bill that would allow even healthy people to receive assisted suicide. But ending one’s life is “diametrically opposed to the Jewish values that sanctify life,” said Martel, who added that Immanuel advises patients not to give up their homes in case they wish to end their life after being admitted to the institution.

Anne van de Geest is a non-Jewish guest in her 90s who is unable to walk because of cancer that has metastasized throughout her body.

“I like the atmosphere here, which is quiet but lively,” she said.

Van de Geest, who used to make jewelry and fashion accessories, said she chose to stay at Immanuel after hearing good things about it from friends.

Word of mouth was also how Chazia Mourali, a well-known television host and writer in the Netherlands, heard of Immanuel, where her mother, Elise van den Brink, stayed before her death in 2015.

“We’re Catholic and people at church told us the Jewish hospice was the best choice,” Mourali, whose father was born in Tunisia, told JTA at the symposium. “We liked the sound of that and she felt right at home.

“People with our Middle Eastern mentality — a Calvinist Dutch hospice is the last thing we needed.”