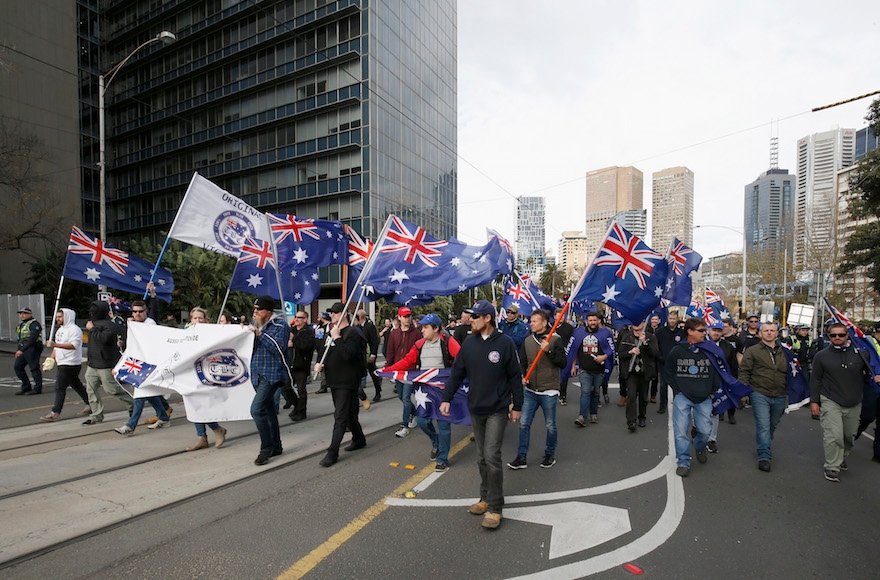 SYDNEY (JTA) — An Australian rabbi has denied a report saying he does not feel safe in his country.

Rabbi Shmueli Feldman, a fourth-generation Australian, made the remarks about his safety to The New York Times in the wake of a report released Sunday finding a 9 percent increase in anti-Semitic incidents over the past year, as well as personal incidents.

The annual report also found a nearly 20 percent rise in incidents over the past two years.

While Feldman in an interview with JTA refuted The Times report, the Chabad rabbi also said he dreads another attack on his suburban Canberra home by a group of young white Australians and “I feel currently a lot less safe in our own home for the first time ever.”

His family’s experience was highlighted in the report on anti-Semitism in Australia released by The Executive Council of Australian Jewry. The report said there were 230 incidents in Australia through Sept. 30.

On Sukkot this year, as the rabbi, his wife and five children sat in their sukkah in the late afternoon, passengers in a car that approached their home screamed anti-Semitic epithets. The car sped off well ahead of the police’s arrival, but a surveillance camera installed by the rabbi captured the license plate number.

“The police interviewed the driver who said it was his passengers who had been screaming the hate, but he refused to comply with the police’s request to identify them,” Feldman told JTA.

“Laws must be tougher. The police should have been able to get the information from the driver. They told me they had done everything they could.”

The Feldman family, which reportedly was traumatized by the incident, had experienced others.

“Rocks and eggs are regularly thrown at our home and the Chabad center,” the rabbi told JTA. “It’s not safe for our children to play in our garden. We see incidents at our home or the center around every three weeks.”

Feldman recalled strolling through a Canberra mall with his 5-year-old daughter when two men yelled at her in Arabic, which the rabbi understands, “You filthy Jewish slut.”

Still, the rabbi denies saying he doesn’t feel safe in Australia, which the international media have reported.

“I think we’re lucky to live in Australia,” he told JTA. “Our political leaders and law enforcement officers condemn hatred and anti-Semitism. However, with people still at large who have targeted my home and my family, including five little children, I feel currently a lot less safe in our own home for the first time ever.”

Feldman said he is hoping to see tougher laws to combat racism, giving the police the power to stem the tide of rising anti-Semitism.