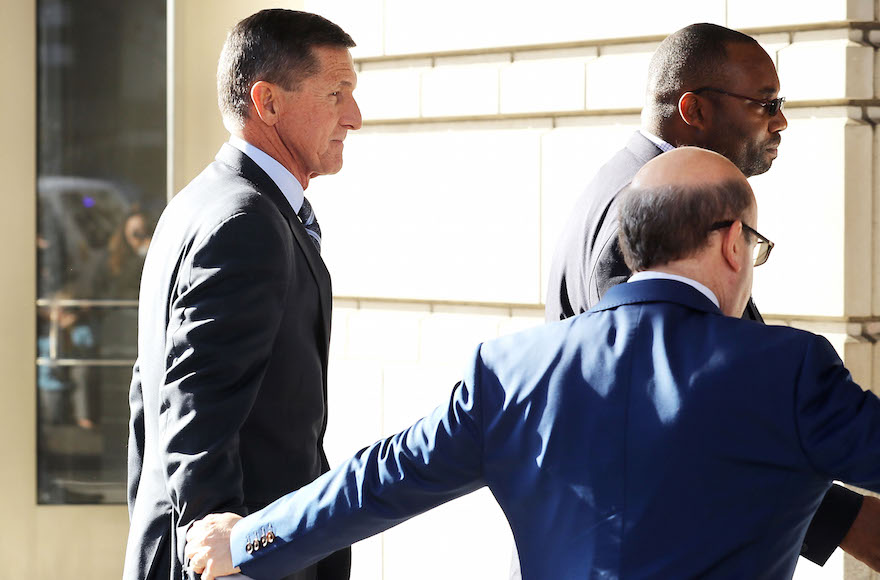 WASHINGTON (JTA) — Michael Flynn, President Donald Trump’s former national security adviser, has pleaded guilty to lying to the FBI, including about his efforts to stave off a U.N. Security Council resolution opposed by Israel.

Flynn offered his plea Friday in a federal court in Washington, D.C., on charges that he lied twice about conversations with Russian Ambassador Sergey Kislyak in December 2016, when Trump was president-elect and President Barack Obama was still in office.

According to the charge sheet, Flynn in a Jan. 24 interview with FBI agents denied that on Dec. 29, he asked Kislyak for reassurances that Russia would not retaliate for sanctions that Obama had just imposed for Russian interference in the U.S. elections. Also, on Dec. 22, he allegedly asked Kislyak to use Russia’s Security Council status to delay a vote on a resolution that would condemn Israel for its settlement activity.

Russia did not retaliate for the sanctions. However, the Security Council vote went ahead because for the first time in his two terms, Obama did not exercise the U.S. veto to stop a resolution in that body opposed by Israel. The United States abstained, while Russia was among the 14 Security Council members who voted in favor.

It’s not clear yet why Flynn would have lied. There are statutes, rarely if ever used, criminalizing the conduct of foreign policy without the knowledge of the government of the day. However, previous governments-elect have flouted them during transition periods, sometimes openly.

The Obama administration allowing the resolution to pass has become a main talking point of Trump officials who seek to distinguish the Israel policies of the two presidents. Nikki Haley, the U.S. ambassador to the United Nations, has said that she would never allow such a resolution to advance.

Should Flynn plead guilty, it will fuel speculation that he is cooperating with Robert Mueller, the special prosecutor investigating whether the Trump campaign colluded with Russia during the election, and may have testimony that could help indict someone more senior in the campaign.

Flynn was forced out weeks into his tenure as national security adviser after it was revealed that he had lied to Vice President Mike Pence about his contacts with Kislyak.