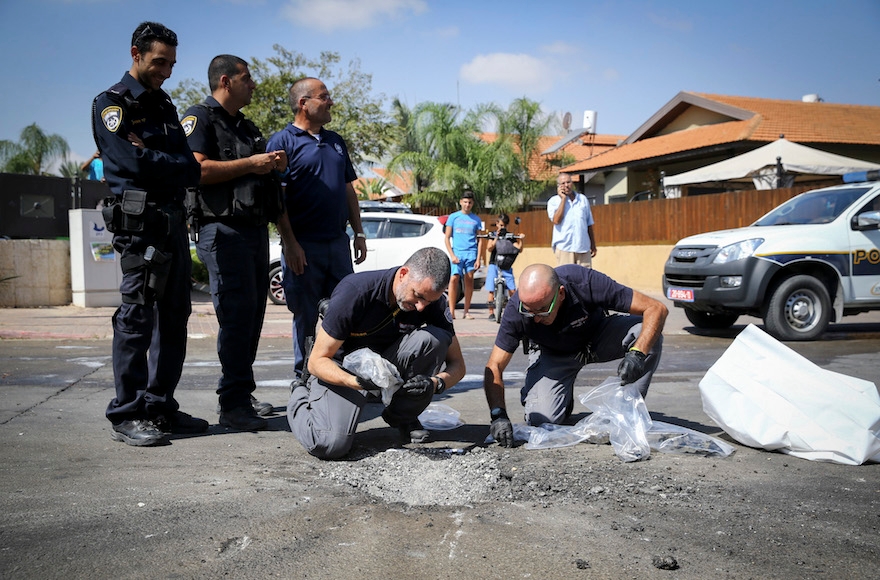 The site where a rocket fired from Gaza hit the southern Israeli city of Sderot, Oct. 05, 2016. (Flash90)
Advertisement

JERUSALEM (JTA) — One of a series of rockets fired at southern Israel from Gaza damaged the entrance of a kindergarten in the town of Sderot.

The rockets were fired Friday evening when school was not in session. In addition to the rocket that landed near the kindergarten, one landed on a residential street in Sderot, damaging a car and a home. A third was intercepted by the Iron Dome missile defense system.

On Sunday, an Israeli girl, 9, was injured by a rock thrown by Palestinians at the car in which she was riding in the Etzion settlement bloc of the West Bank.

Also on Sunday, about 30 students from Tel Aviv University demonstrated on campus against the decision by the United States to recognize Jerusalem as Israel’s capital.

Some of the demonstrators wore keffiyehs, others carried Palestinian flags and chanted, “With spirit and blood we will redeem Palestine,” and, “Jerusalem is Arab.”

Palestinians and Arab Israelis have been protesting, in some cases violently, following U.S. President Donald Trump’s announcement on Wednesday.