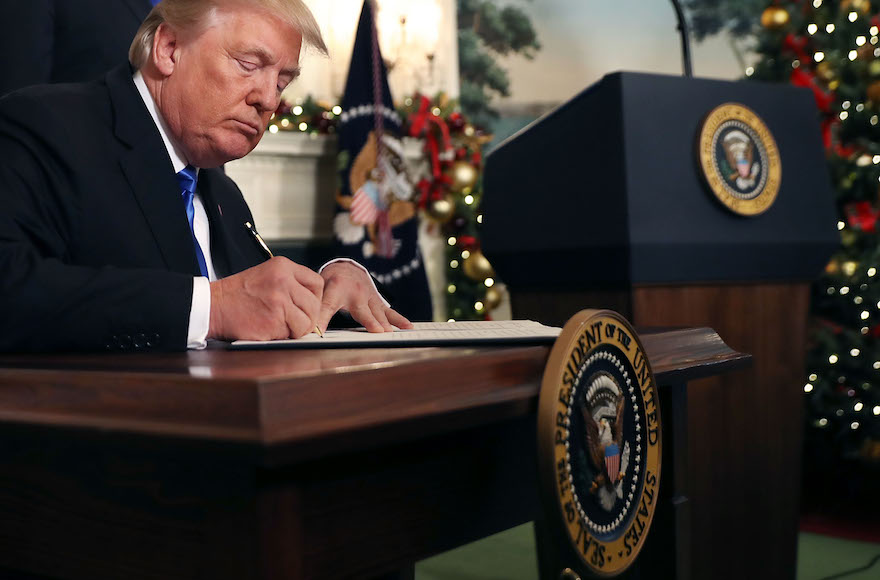 It could spark a conflagration of violence in the city, they said. It would alienate Palestinians who revere the city and ice any remaining hopes of a peace process. It could be the death knell for an increasingly elusive two-state solution.

But a countervailing chorus of analysts, mostly on the right but stretching to the center, says the opposite: Trump’s recognition of Jerusalem is a strategically savvy course correction of American foreign policy. It has not hurt prospects for peace, they say, and there’s a good chance it will help.

“U.S. recognition of Israeli sovereignty over Jerusalem might contribute to peace,” Douglas Feith, President George W. Bush’s undersecretary of defense, wrote in Foreign Policy. It teaches Palestinians, he wrote, that “[t]here is a price to be paid for perpetuating the conflict: Life goes on, the Israelis create new realities, and the world in general adjusts to those new realities.”

Trump’s declaration showed that the United States would not be cowed by extremism, tweeted Amos Yadlin, who heads the centrist Israeli Institute for National Security Studies and affiliates with the center-left Zionist Union party. Resisting threats of violence changes the contours of peace negotiations, he added.

“Trump was not intimidated by the threats from Ramallah, Amman, or Ankara,” Yadlin wrote in a Twitter thread, referring to the Palestinian, Jordanian and Turkish capitals, respectively. “The refusal to bow to the threats and blackmail, together with the message that the Palestinians do not have veto power, [is] a very important precedent for the future of the peace process.”

Jewish groups, meanwhile, largely praised the move as a recognition of Jewish historical and religious claims to the city, long overdue, as well as an acknowledgement of Jerusalem’s status in modern Israel as the seat of government. But many of them, too, reiterated their support for the two-state solution and urged Trump to double down on that cause.

“This is a significant step that acknowledges reality: Jerusalem is the political capital of the country and has been the spiritual heart of the Jewish people for millennia,” read a statement by the Anti-Defamation League, which has not shied away from criticizing Trump’s actions in the past. The statement went on to urge “the rapid resumption of Israeli-Palestinian negotiations leading to a two-state solution.”

One week after Trump announced the decision, any peace prospects do appear to have dimmed: Protests did take place in Jerusalem and Palestinian areas, though they were far milder than anticipated. Palestinian negotiator Saeb Erekat called on his people to now pursue equal rights within Israel rather than a state of their own, while Palestinian Authority President Mahmoud Abbas said the U.S. no longer has a role to play in brokering talks.

But that does not bother analysts who feel the United States should present itself as a resolute supporter of Israel rather than an evenhanded mediator. Such a stance, some wrote, rightly puts the onus on Palestinians to adjust their demands and show their willingness to reach a deal.

“The intention is to disabuse the Palestinians of the notion that the U.S. is neutral between them and our democratic, pro-Western, tolerant, free-market ally Israel,” wrote Shoshanna Bryan, senior director of the Jewish Policy Center, a conservative group, in the Daily Caller. “American support for Palestinian’s aspirations is not withdrawn, but hinges on Palestinian behavior.”

But some analysts who were inclined toward the decision also warned that granting a longstanding Israeli demand could put Israel in Trump’s debt if he ever demands concessions.

“Because Trump is viewed as very pro-Israel by the Israeli public, it will be more difficult for Netanyahu to say no to any requests from the president for compromises,” wrote Jonathan Rynhold, director of the Argov Center for the Study of Israel and the Jewish People at Bar-Ilan University. “It was easy for Bibi to say no to Obama, since there was no domestic political price; not so with Trump.”