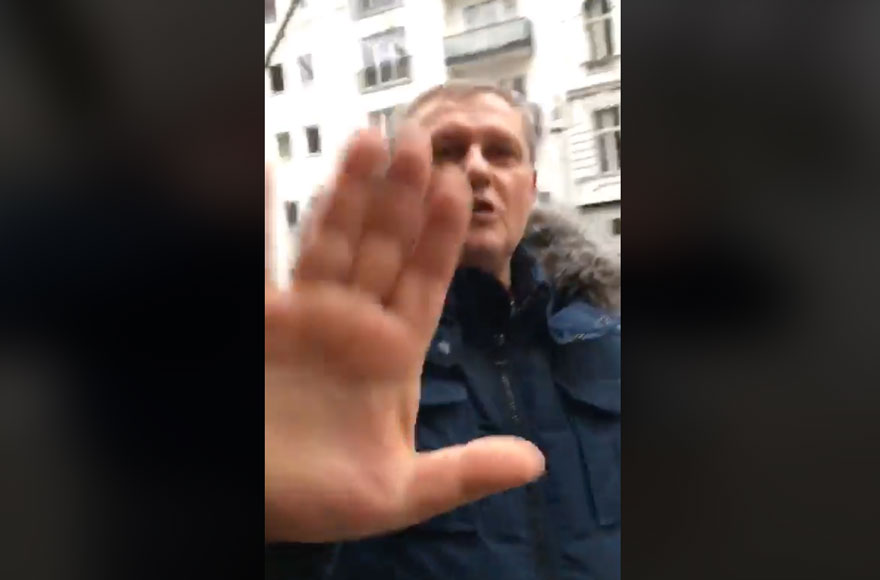 BERLIN (JTA) — A video of a 60-year-old man spewing an anti-Semitic rant outside an Israeli restaurant in Berlin has gone viral.

The six-minute video of the man haranguing restaurateur Yorai Feinberg on Tuesday has been viewed more than 600,000 times on the internet since it was posted the same day. The man was released and the case is under investigation for inciting hate and resisting arrest.

Feinberg, whose restaurant bears his name, told the German news media that he often had to deal with anti-Semitism on the street, and he receives about two pieces of hate mail per month. This time, a friend of Feinberg was on hand to record the exchange.

“This guy saw my menorah in the window and suddenly started shouting,” Feinberg told the Spiegel online.

Dressed in a winter parka, the man at first tries to wave the camera away. But then he tells Feinberg that Jews belong neither in Israel nor in Germany, and says “nobody wants you people.”

“Everything’s about money with you,” he says at one point. “You will have to pay up in five or 10 years. And your whole family, your whole clan here,” he says, waving toward the camera. “What did you all want here after 1945? After 6 million of you were killed. What do you still want here?

Feinberg, who had been trying calmly to shake off the man, then sees a police car passing by. He runs and waves down the officers.

At which point the man says, “No one will protect you … you can all go to the gas chamber. Either go back [where you came from] or off to the bloody gas chamber. No one wants you.”

The police insisted that the filming stop. According to reports, the man resisted arrest and also tried to prevent taking a blood test that could provide evidence in any court proceeding. It was not evident from the video whether the man was under the influence of alcohol or any other substance.

Israel’s ambassador to Germany, Jeremy Issacharoff, stopped by Feinberg’s on Thursday and commented to the German media that it was important to “deal right away with such cases, with zero tolerance.”

“The right reaction to any kind of anti-Semitism is an immediate reaction,” he said.

The head of the Central Council of Jews in Germany, Josef Schuster, told the Juedische Allgemeine newspaper on Thursday that this
“disgusting attack brings home the point that anti-Semitism has reached the mainstream of society, where it is expressed openly and
bluntly.” Many Jews worry about whether it is safe for them to live in Germany, he added.

Meanwhile, Facebook officials apologized for having temporarily removed the video from its platform and shutting down the profile of a friend of Feinberg who had posted it. Both have since been restored.

Last summer, the German parliament passed a law requiring internet platforms such as Facebook, Twitter and YouTube remove material with obviously illegal content and fake defamatory “news” within 24 hours of its having been reported. Penalties for a failure to comply are heavy, with potential fines of up to 50 million euros, or about $56 million.